Requires: IOS device (iPhone 4S, iPod Touch 5th gen, or iPad 3rd gen or newer with functioning Bluetooth) and an audio receiver with a spare analog input. An Android 4.0 version of the app is also available.

Putting a home media center can be a daunting task. I can personally attest to this. Itâ€™s not just the complex tech gear, but the many choices available to the hapless consumer. All I can recommend is to do what I did: research like crazy.

For many people, the Flyover Innovations Blumoo system might just be the best thing for a universal remote control system with a few twists that Iâ€™ll get into shortly.

The Blumoo system consists of two components: the HomeBase with connecting cables, and the Mobile App, which is used to control your home media center. 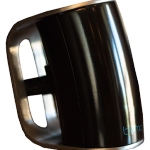 First, the HomeBase, which is a small, unobtrusive device with smoked black plastic housing that only needs to be visible to your remote controllable media center components. The connector/cable, which is hardwired to the HomeBase, has three connections (left to right in figure at right): DC power (from a provided wall wart), a port for an optional IR remote extender (not tested), and the audio output jack. A standard 3.5 mm to stereo RCA plug cable is used to connect the HomeBase audio connections to a high-level analog input on your receiver. I used the front panel audio/video connector on my Onkyo receiver. Because it is Bluetooth v4.0 Smart ready, as more Bluetooth 4.0 devices hit the street, the Blumoo HomeBase will support them. This also means range jumps to up to 150 feet and permits multiple simultaneous connections.

Next is the Mobile App. This is downloaded, free of charge, from the Apple App Store, and is the heart of the system. From here, you can access a database of over 200,000 remote controllable media devices, with everything from your AV receiver to a Roku box available. It even had settings available for my favorite media center application, Plex. You can build macros to control several components with a single button-push.

Since you need the IOS device to act as a remote, it seemed quite logical to exploit the IOS deviceâ€™s Bluetooth function and the iTunes audio routing features to route Internet radio content from Pandora, Spotify, Google Music, and iTunes Radio to the Blumoo device. More sources are coming in future updates. 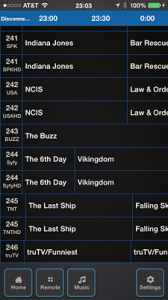 Once you tell it where your primary programming source is coming from (cable, satellite, over the air), and where you are (by zip code), the app downloads the appropriate program listing, including, in most cases, detailed program descriptions. Very nicely done. Needless to say, those of you who have satellite services like DirecTV will have a lot of scrolling to do. You can even set reminders to yourself for shows you wish to watch.

Suggestion to the developers: Add a function to permit users to hide the channels they donâ€™t want to see. ThatÂ  should reduce the amount of scrolling you need to doâ€”such as on large cable or satellite systems with many hundreds of channels.

Those are the basics. Getting it up and running may be challenging to some, though.

My test unit was an early production unit. The user guide was a sadly typical four-fold affair with just the most basic information necessary to physically set up the hardware. Software configuration information was nowhere to be seen, and believe me, it wasnâ€™t so intuitive that you didnâ€™t need a manual â€“ you absolutely need documentation of some kind. Because the Blumoo website was still very sketchy at that early stage, I had a real tough time trying to figure out some of the app functions. Maybe I am not sufficiently observant and familiar with some of the standard IOS graphic user interface symbology, but I really had a tough time trying to figure out how to access the macro functions, not to mention how to set up streaming music services.

Other work and personal issues cropped up, forcing me to set this review aside for about a month. Like they say, life happens. Anyway, I resumed working on the review and revisited back to the website. Boy was I pleasantly surprised at the wealth of information that had been added in the last month or so! The videos did a great job describing some of the more difficult functions in an easy and understandable fashion. 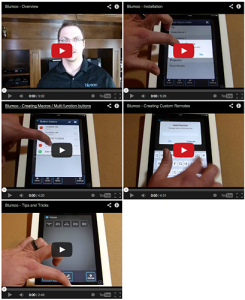 After going through some of the videos, I began programming the remote. As you choose sources (TV, Cable/Satellite box, DVD/BluRay player, streaming video devices like AppleTV, AV receivers, etc.), the app steps you through the basics such as type of device, brand, and model. It then builds a set of function buttons that provide control to nearly all of the most important features of each device. I built macros for each major component so that if I want to watch something on DirecTV, I simply press the power-on macro button, to turn on the TV, the DirecTV box, and the AV receiver.

Request to the developers: Either fix the List button on the DirecTV remote panel, or remove it. When I tapped the List button, I got a message stating it wasnâ€™t defined, and after going through the available settings, the List function was conspicuous by its absence, so I couldnâ€™t even set up a macro. The List button, by the way, is used to interact with the programs you have stored for later viewing. Without the list button, these stored shows are inaccessible (unless you drag out your DirecTV remote, or perhaps another universal remote you already have, such as my Logitech Harmony One). 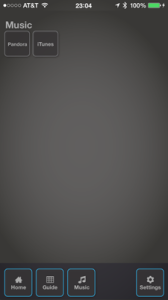 The one I couldnâ€™t figure out for a long time was how to setup the streaming music services. I should have seen it, but didnâ€™t until I did a careful review of the video help files. Basically, you need to have at least one or more of the four supported services installed as apps on your IOS device: Spotify, iTunes, Pandora, and Google Music. Once they are installed and configured, the Blumoo application automatically discovers them and adds an icon to the Music screen for each service it sees. See, not so hard after all, but it should have been more obvious (or maybe at least put in a prominent location in the FAQ).

On a regular basis, the Blumoo app pops up a message to advise you that the HomeBase firmware needs upgrading. This only takes a few minutes, and shows the value of such a feature, especially during the initial product release cycle where unanticipated bugs find their way to the surface. This is not a black mark by any means. This is the best way to get fixes to the users in the quickest way possible with something that probably needs to be seen by the userâ€”not like most app updates that can go on in the background.

Mind you, setup isnâ€™t nearly as bad as those older universal remotes. Remember when you had to point your DVD player’s (or other) remote at the universal device, which then had to â€œlearnâ€ the correct signal? That could take days to complete. The Blumoo setup was much, much easier, though to be honest, I found the setup for my Logitech Harmony One remote even easier, and the List button for my DirecTV box works. The Harmony One setup is also much easier, in my humble opinion. But again, the Harmony doesnâ€™t provide access to Internet radio stations, which could be a big issue if you have an older receiver that doesnâ€™t have a Wi-Fi or Ethernet connector to bring in the Internet.

In summary, the Blumoo Home Entertainment â€œAppcessoryâ€ is a solid product that can meet the needs of many users of home media centers by consolidating remote control functions into a single device (often a large and contentious issue with the â€œdecorating committee,â€ who barely tolerates the big screen TV and all the necessary components). Just use your IOS (or Android) device to perform probably 90% of all the remote functions most people need. It is a little pricey, but if sales really take off, price reductions shouldnâ€™t be too far behind. The developers already have big plans to improve the existing feature set and add many new features. Being so new, it is, to some extent, a work in progress. The Blumoo device and app work as advertised, and if you donâ€™t already have a decent universal remote, the Blumoo device is worthy of your evaluation. That said, I still felt compelled to drop the rating a point or two due to the difficult setup and rather high price.