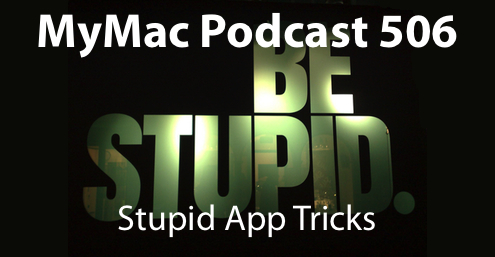 We have another guest this week as Allister Jenks joins in to talk about all kinds of stuff and all three go into what THEY think are stupid apps. Even bad Skype delay couldnâ€™t deter them.Download the show hereRSS Feed for your podcast appSubscribe in iTunes

Links:Guyâ€™s App Pick:Â Star Wars TSGÂ free! FREE! Ever want to make a title sequence like they have at the beginning of every Star Wars film? Ever think “That’s WAY too hard!” Well Star Wars TSG to the rescue. You can specify the size, number of frames per second, the studio name, the film name, and what you want said in the opening crawl.Then save it to an empty folder. Why? Because It makes a series of BMP image files that you then have to string together in QuickTime Player 7 with File -> Open Image sequence. The newer version of QuickTime won’t do it.Gazâ€™s App Pick:Â FlowÂ $4.99 or Â£2.99 UK or NZ$6.49. Flow is an FTP + SFTP client. With URL Copying, Droplets, a built-in editor, and QuickLook. Reviews are mixed but I’ve used it for a while and I like it, it may not be as good or have the features of other more sophisticated FTP clients, but I’m not sophisticated.Allisterâ€™s App Pick:Â Ripit! From the little app factory $24.95. DVD ripping software