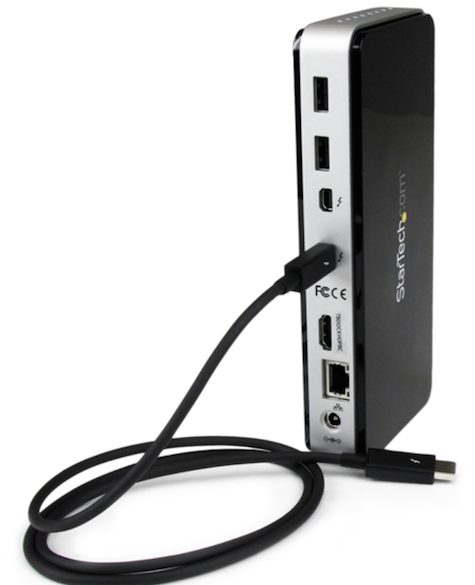 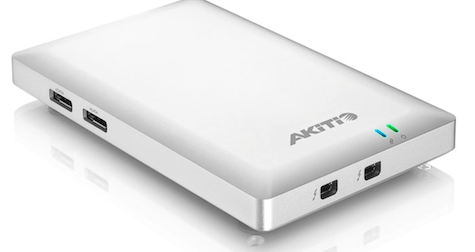 Your life just changed for the better. You purchased and put into service one of these newest-generation of hardware docks that are compatible with the Thunderbolt ports on your recent MacBook Pro. Itâ€™s time to party as if SCSI, FireWire, and USB docks are ancient history, which they are, thanks to StarTech and Akitio.

Each physical device is roughly the same size as the other, but they look very different when in use. The black and gray StarTech stands upright on a black base, and the silver Akitio sits flat on your table or desk. Neither one is the clear winner in the beauty contest, although your aesthetics and desk configuration may favor one over the other.

Similar two-cable power units are necessary; in the USA, StarTechâ€™s is 3-prong and Akitioâ€™s is two-prong. Only StarTech provides multiple plug adapters for international customers. Score one for StarTech.

Skimpy written manuals are included in several languages, and Akitioâ€™s has a QR code for additional information. For $250, each company should provide better written documentation, although typical customers will understand how to use each of these devices without much training.

Akitioâ€™s Thunder Dock also has one FireWire 800 port, two USB 3 ports, and two eSATA ports. The latter wonâ€™t be useful to most Macintoshers without any eSATA hardware. Other World Computing has a versatile $24 U.S. cable that converts eSATA into USB 3, and I use it frequently. Â MyMac applauds Akitio for keeping FireWire 800 equipment alive, in addition to the new speedy USB 3 standard.

StarTechâ€™s Thunderbolt Laptop Docking Station has three USB 3 ports, although their black plug inset mayÂ  confuse people who consider blue plastic insets to represent USB 3. One Gigabit Ethernet port and one HDMI port are provided, plus one each audio mic in and headphone out port.

Akitio gets a point for FireWire and half a point for eSATA. StarTech gets one point each for Ethernet, HDMI, and audio.

But StarTech is not firmly in the lead. Techies who rely on FireWire and multiple USB ports will choose the Akitio unit. Multimedia aficionados will want the StarTech dock because of the HDMI and audio options, plus that extra Ethernet port that has been eliminated from newer MacBook Pros.

Personally, Akitioâ€™s Thunder Dock will get more action because of my zillions of legacy FireWire drives that I continue to use natively with my aging MacPro tower; and with an Apple Thunderbolt adapter cable to my newer MacBook Pro. If I was a hard core multimedia person with an HDMI display or monitor within cable range of my computer, I would enjoy connecting the StarTech product.

As additional Thunderbolt docks appear in the marketplace, observe their prices trend downward toward an eventual cost closer to $100 U.S. Meanwhile, if you have read this far you realize that $250 is a reasonable price to pay for breakthrough technology that greatly extends the reach of your new MacBook Pro.

I donâ€™t know if Thunderbolt ports are capable of bus-powering multiple external devices, which some USB and FireWire hubs can achieve without any AC power. If this can be accomplished, watch the accelerating popularity of Thunderbolt docks.

Real world data transfer tests with USB 3 external drives, which are the peripherals common to both units under consideration, yield identical results, to the second! The FireWire versus HDMI configurations will determine which Thunderbolt dock you buy first. Note: my MacBook Pro has its own HDMI port plus single audio port; Ethernet adapters are available from Apple.

Study the company descriptions and specifications, look at the photos, and read other reviews of these Thunderbolt docks.

Thanks and congratulations to both companies for being first to market with new technology docking stations that make our Thunderbolt, USB, eSATA, HDMI, Ethernet, and audio equipment easier than ever to use and enjoy for years into the future

â€œNemo did not use the eSATA quite often so that he did not consider our two eSATA ports are a big advantage. If users would use the eSATA RAID, they can enjoy these fast SATA III interfaces. We use two independent SATA host controllers which occupied half of the Thunderbolt bandwidth (the other half is used for USB3 and FireWire). For pro-users who need the eSATA interfaces, they can connect two SATA devices and both have high speed (as a comparison, if they connect two USB 3.0 devices to either StarTech or our dock, the two devices need to share the bandwidth so the performance becomes half).â€

3 thoughts on “StarTech Thunderbolt Docking Station versus Akitio Thunder Dock: And The Winner Is? – Nemo Memo”