One of the great things about going to Macworld is discovering new apps. With some, you think, why didn’t I think of that? Noteology is one of those apps.

Noteology is an iPad-only app that lets users record video, and, at the same time, take notes and set bookmarks. You can play back the video with or without the notes, and even edit or add notes and bookmarks. No more missing what the speaker is saying because youâ€™re too busy writing things down. 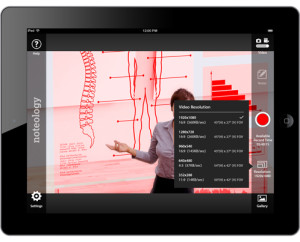 Help is plentiful in Noteology. Each screen has its own help overlay so at a glance users can find their way around the app. If you need more, Noteologyâ€™s web site is an excellent resource.

The creators of Noteology recommend using a Bluetooth keyboard with the app for maximum productivity but itâ€™s not mandatory. Many keyboard shortcuts, like opening a note, stop or start a recording, or open video resolutions are available. For a full list of keyboard commands check the list here.

To add a note or bookmark you must be in either recording or playback mode. Videos, photos, and notes can be shared separately with Dropbox or Camera Roll, or emailed; notes and bookmarks arenâ€™t embedded in the video.

I found syncing with Dropbox worked most of the time. There was a period where Noteology consistently crashed when using Dropbox but itâ€™s possible Dropbox was having problems on their end. Syncing has been flawless since that day, and I havenâ€™t experienced any crashes with Noteology.

I highly recommend that if you use Dropbox for syncing your videos and notes with Noteology that you go into Dropbox and change the names of your files. Noteologyâ€™s naming convention can be quite confusing. Photos are called Img_date_time.jpg, preceeded by the File Name Prefix you assign or the title you give it after the photo is snapped. Videos are similarly named with the Mov moniker. Notes also begin with Mov, and end with .pdf and are found in the PDFNotes folder.

A feature I would love Noteology to add is the ability to record using the front facing camera. It would come in handy in certain situations, like demonstrating a specific craft technique or showing off cooking skills. Noteology is only at version 1.0, so I hope the developers have a few tricks up their sleeves for future versions.

I was very impressed with Noteology. If I was in college or attending lectures Iâ€™d be using it constantly.