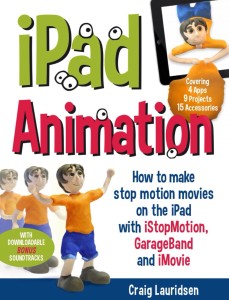 At first glance iPad Animation How to Make Stop Motion Movies On The iPad with iStopMotion, GarageBand, and iMove by Craig Lauridsen looks like a giant advertisement or manual for the iPad app iStopMotion by Boinx Software. However, as you get further into the book it is much more. It is a great book on stop motion animation that has tips and techniques that can be used with any software, even though iStopMotion is the software used and explained in the book.

The book is broken up into five chapters. The first is a brief chapter explaining stop motion animation and animation on the iPad. The second covers animating with iStopMotion. Much of this chapter reads like a manual that should be freely available to iStopMotion users. However, as I said earlier, there are many tips and tricks that are not exclusive to iStopMotion. These tips range from making rain and lightning effects to building mounts for your iOS device (my favorite being with LEGO). 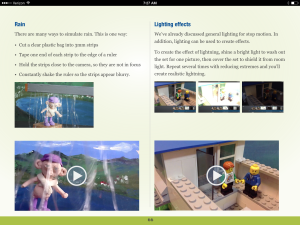 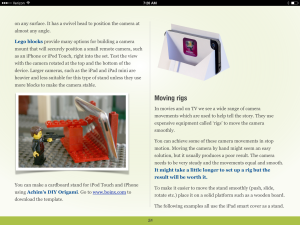 The next two chapters explain how to use your animation footage and create a soundtrack in Garageband and how to put it all together in iMovie. The GarageBand chapter also has a section on using the djay app to create further sound effects and tracks.

The final chapter walks the reader through ten animation projects and how to create them on your own.

Overall, the book is a fantastic resource for the stop motion animator. I could easily see this being used in classrooms as a resource or a textbook for a course in stop motion animation. It not only has written text but embedded videos, product links and more. It is easy to read and not just for the animation/tech geek.

My biggest problem with the book is that there is no summary or concluding chapter. You get to the end of Chapter 5 and the book just stops. It makes you feel like something is missing to tie everything together.

If you are into stop motion animation and creating it with your iOS device this is definitely the book to consider.