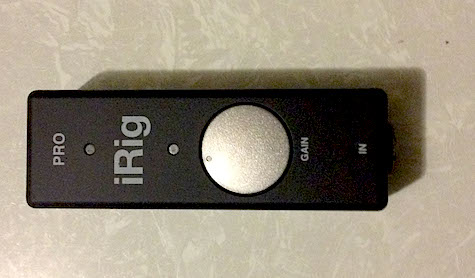 IK Multimedia has introduced an excellent new product for the Mac, iPhone, iPad, and iPod touch. The iRig Pro is an accessory for both amateur musicians like myself or for the more seasoned musician.

The iRig Pro is a device that allows musicians to plug a guitar, bass, MIDI controller, or microphone into an iPhone, iPod Touch, iPad, or Mac computer and quickly play and record. The iRig Pro is smaller in height than a highlighter. Everything that is needed for great sounding recording, practicing, and playing can fit nearly anywhere. The iRig Pro uses a 24-bit conversion from analog to digital signal. That translates into a high quality digital recording that retains the integrity of the analog instrument.

I tested out the iRig Pro using my Mac as well as my iPad 2. I enjoy the portability and ease of using the iRig with the iPad and the app AmpliTube, which I use for playing, recording and editing. AmpliTube is also by IK Multimedia. I am pleasantly surprised at how well the iRig Pro and AmpliTube work with my older iPad.

The iRig Pro has a Â¼â€ guitar/bass input that also can be used for a microphone input. There is a MIDI IN jack for external MIDI instruments. I use the iRig Pro with both of my guitars and the sound is excellent.

The design of the iRig with the input gain control knob is front and center â€“ conveniently placed with a dial that is large enough to be easy to use, but with a slim enough profile that the product remains efficient in size. This is one of the many features that make the iRig Pro so incredibly simple to set up and use.

The simplicity of getting the iRig up and running makes the device attractive to beginners and/or amateurs, but it also has enough oomph behind it so that in a home recording environment nearly anything is possible. 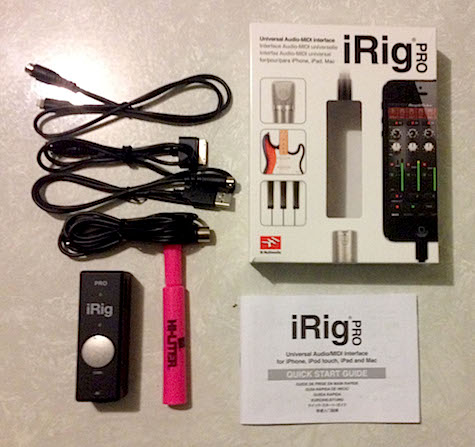 The iRig Pro unboxed includes a Lightning cable, a 30-pin dock connector, and a USB cable to hook up to the Mac. Whether youâ€™re on the go and recording with an iPhone or practicing and mixing on the Mac, the iRig Pro has everything needed to do it all. The interface with AmpliTube on the iPad is responsive and the sound overall is impressive. Thereâ€™s something for everyone to like with the iRig Pro.

IK Multimedia also deserves a shout out in this review. The iRig Pro is indeed very easy to set up, but as a newer Mac user, I had some questions with registering the product and with setting up the IK Multimedia Authorization Manager. The customer support team is very helpful and I was up and running quickly.

My overall experience with the iRig Pro and with IK Multimedia is extremely positive. I am enjoying learning about and using the iRig Pro product and exploring AmpliTube.

I canâ€™t say enough great things about the iRig. The only downside that sticks with me is the IK Multimedia Authorization Manager, however, with great customer support the impact on my overall experience is minimal. The iRig Pro is a small yet powerful tool for anyone interested in music and recording that I highly recommend.