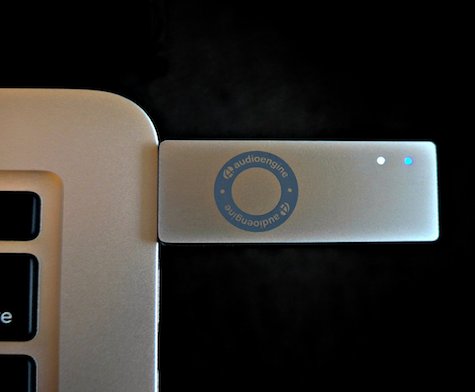 When the Audioengine D3 DAC arrived, I ran it for a few hours just to keep it honest, although I didn’t expect a significant change with a burn-in period. When I finally got around to listening later that evening, I thought the sound was as good as anything I’ve ever heard. In fact, having spent a great deal of time with the HRT Microstreamer and v-moda Verza recently, the first thing that I became aware of was an impression of analog-like sound.

By analog, I don’t mean that anything was added such as low-level system noise like you might expect from phono preamps etc. â€” instead the sensation was as if the sound were made palpable in some way. Compared to the Microstreamer, which is an excellent performer with my headphones, the violin in Emily Palen’s high-resolution Inevitability of Water had a little more rosin on the bow, so to speak.

It was the bass that made the biggest difference with the D3, and I think anyone who has a chance to audition the D3 in a quiet and relaxed setting will pick up on that pretty quickly. The deeper tones were stronger with greater impact, but it wasn’t an elevated or emphasized bass as is common with a lot of headphones these days; it was as if the bass tones had a better tonal quality that made them stand out more.

How much the D3 will improve on the sound of an existing system such as a computer sound card feeding the headphone jack depends on how good the sound card actually is. I’ve been impressed with the quality of my two computers’ headphone outputs, and while using a DAC with these computers has made a noticeable improvement in the sound, it hasn’t been quite as much improvement as I’ve been hearing with this D3 from Audioengine.

The purpose of a DAC (Digital to Analog Converter) is to reverse the ADC (Analog to Digital Conversion) process that audio engineers use to turn the analog sound (i.e. voices and instruments captured by microphones) into digital data that can be written onto CD’s (Compact Discs) or sent streaming across the Internet.

All digital audio devices such as cellphones, MP3 players, CD players, and even digital radios contain DAC’s that convert the digital data they contain (or that they receive from the Internet) into analog sound that can be played on speakers or earphones. Some of these devices that also record sound contain ADC’s that convert the sound captured by their microphones into digital data that is then written to the internal memory of the device.

Normally we aren’t concerned about these DAC’s and ADC’s since whatever devices we use to record or playback sound will contain the proper electronics (usually one or two tiny microchips) to accomplish what they’re designed to do. But the digital age is relatively new as far as ‘MP3’ music players (and advanced music players that use higher quality data than ‘MP3’ players) is concerned, and much has been learned in the past 15 years – mainly about the complexity of music and how the most widely-used ADC’s and DAC’s don’t preserve everything that the ear can hear, when converting analog sound into digital to save into computer files and then play it back on speakers and earphones.

Like every other industry in the world that serves consumers, the digital era set standards for ADC’s and DAC’s that made their way into millions of devices that people came to depend on every day. So when newer, better ADC’s and DAC’s were designed, they weren’t always compatible with existing electronics. These new ADC’s and DAC’s were gradually adopted by recording engineers, usually at great expense since they weren’t produced in large quantities like most consumer goods.

DACs that I’ve purchased in the past two years include the Audioengine D1, Audioquest Dragonfly, FiiO E07k, FiiO E17, HRT Headstreamer, iStreamer, and Microstreamer, and v-moda Verza. The iStreamer and the FiiO DACs offered the least sonic improvement for the devices I used with them, the v-moda Verza was a step above those three, and the remaining four were more-or-less comparable. The only DACs I’ve experienced any noticeable distortion with were the Dragonfly and Verza.

In the case of the Verza it may have been a component failure, and I have someone checking that out in the next couple of days. With the Dragonfly, the distortion was sudden and loud, and stopped just as quickly. I was not able to identify a cause, but my instincts tell me that since USB mini-DACs rely on the small amount of available USB power for everything they do, including running the headphone amp with all of its demands for extreme dynamics in some music tracks, it’s a miracle that these mini-DACs are able to perform as they do.

In the case of this Audioengine D3, I haven’t experienced a single hiccup, and my 96k/24-bit tracks have plenty of extreme dynamics and very strong deep bass. The Also Sprach Zarathustra recorded by the Pasadena Symphony under Jorge Mester in November 1993 is an audiophile’s dream. The low ‘C’ organ pedal that begins this recording is the most powerful I’ve heard that doesn’t have standing-wave reinforcement. The tympani hit hard enough to cause a lesser headphone’s drivers to break up, and the climax of the opening segment around 1:50 into the track has the entire orchestra and organ going full-tilt, yet the D3 plays this music loudly and cleanly, delineating the various sounds as good as the ear can hear. I can’t prove that last part, but I don’t hear anything to suggest that something is being missed.

The D3 DAC has a significant advantage over many other DACs in that there are no cable issues. It plugs directly into the computer USB port, and there is no extra cabling inside to connect DAC to headphone amp, etc. In some audiophile installations the sheer number of external connectors and cables between those connectors can add up to a noticeable loss of sound quality, even though any one component and its connectors and cables wouldn’t make a noticeable difference.

With the D3 driving headphones, you’re likely to hear a significant improvement over computer headphone jacks, even with low to mid-priced headphones ranging from roughly $150 to $300 USD. Above that price range are many headphones that will reveal a more appreciable difference, such as those listed in the Sources and Gear paragraph above.

For users who don’t have much experience with external DACs, and who are listening for the usually-subtle differences between a computer’s default internal DAC and an external DAC such as the D3, I’d like to suggest making that evaluation at home at night when it’s very quiet compared to daytime. In my apartment at night the background noise level is at least 20 decibels less than during the day, and with that reduction in background noise, much more detail can be heard in the music. This is true even with most closed-back headphones, since those generally don’t reduce external noise more than 10-12 decibels at the higher frequencies, and much less than that at middle to lower frequencies. 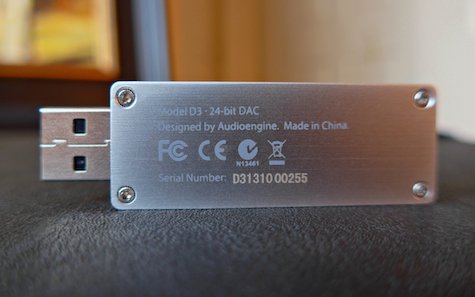 The D3 package includes a 9-inch length 1/4-inch (6.35 mm) to miniplug (3.5 mm) adapter cable for users with larger headphone plugs, a small fabric protective case for the D3, and the D3 itself: a beautiful aluminum device the size of a typical USB flash drive or memory stick. The D3 is bolted together with four hex screws and looks very strong. On one end is the USB connector and on the other end is the 3.5 mm mini-jack for headphones or connection to an audio system. Presumably the 3.5 mm output of the D3 functions as a proper Line Output to an audio system rather than strictly as an output which has been amplified for headphones. There are two LED’s on the D3: one for power ON and the other for data rate.

I use WinXP, Win7-64, and Mac OSX, and while WinXP sends the correct data rate value to the D3, Win7-64 and Max OSX send only the high data rate value. Since all three computers send the music correctly, there must be an additional setting for Win7 and OSX that controls the visible data rate indicator.

In summary, the Audioengine D3 produces the best sound of any of the mini-DACs I’ve heard to date. Itâ€™s easy to carry everywhere in the tiny pouch that comes with it, and the price is no higher than many DACs that don’t sound as good. Highly recommended!

For our MyMac Review Rating, comparing to higher priced DACs, up to $400-$500 perhaps, itâ€™s 9 of 10. Comparing to DACs less than $300, including the Meridian Explorer, Microstreamer and others, an exceptional 10 of 10.

Here is my video review to accompany the written text.Â Â