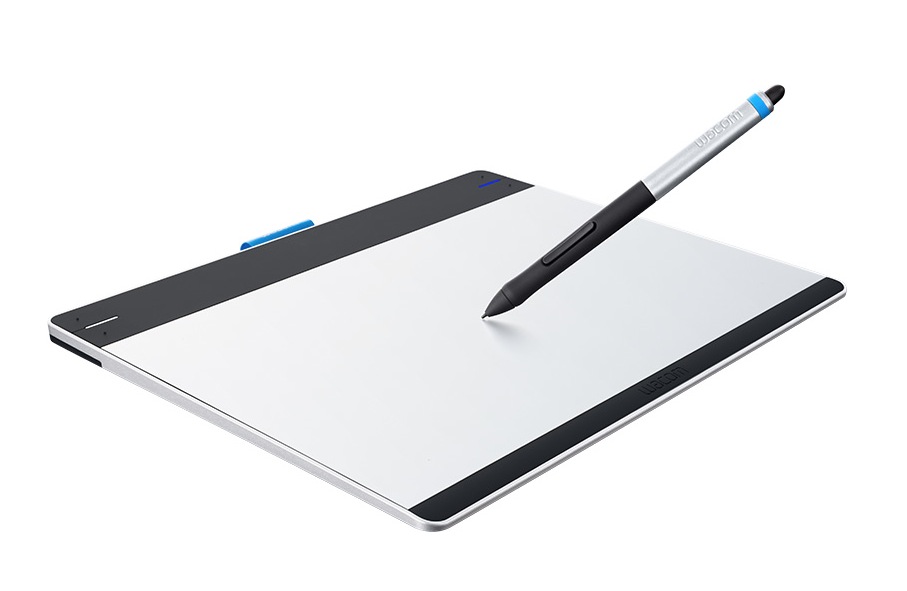 I have been a long time user of the Wacom drawing tablet line. I have been using the tablets all the way back to the Graphires and they have alway worked great. In the past there were two lines of tablets. Graphire, and most recently Bamboo, for the consumers/hobbyists, while the Intuos line was the line targeted at the pro market.

Recently, Wacom rebranded their tablets yet again using Intuos as the name in the entire line. The Intuos line is now the consumer line, replacing what was the Bamboo tablet line, and the pro market now gets the appropriately named Intuos Pro branding.

When I was offered the opportunity to try out the new Intuos tablet I jumped at the opportunity. The Wacom rep told me I would love the new form factor of the redesigned tablet, and he was right! The Intuos tablet has been completely redesigned for the better. It has a sleeker and more professional look to it. With a silver and black design, it looks like it was made to be used with a Mac. It is the nicest looking drawing tablet I have seen and definitely worthy of the Intuos name.

The pen matches the tablet with the silver and black design and it has a blue or black ring that you can use to customize the look. To match the ring you can choose between a black or blue pen holder that connects to the back of the tablet. The pen, like the tablet, is designed to work with the left or right hand.

I was sent a medium sized tablet for testing and it is the most comfortable drawing tablet I have used. The drawing space is almost edge to edge of the 11.75″ width and measures about 8.5”x5.25”. It is not too big and not to small. To me this is the perfect size for a drawing tablet space.

Installation is simple. You connect to a USB port on the computer and install the driver off the included CD. If your computer does not have a superdrive, you can easily download the drivers from the Wacom website.

One complaint I had about the drawing space is that it is not as clearly defined as it has been in the past. Instead of have the drawing space framed out there are four tiny dots where the corners would be. You have to “imagine” the frame based on these dots. Once I figured out the drawing area this became a nonissue for the way I work. I don’t look at the drawing tablet and just go with the feel of where I am. I imagine most seasoned tablet users are that way. However, beginners and others might prefer a more defined space on the tablet surface.

As expected the pen has 1024 levels of pressure and it works great. You can get a drawing or painting software like Corel Painter to act just the way you want it to because  the pen gives you the pressure sensitivity you need when doing that type of work. Flip the pen over and the tool turns into an eraser in those programs that allow it to. While the eraser works great, the feel of it on the pen felt like a very hard pen eraser from those pens that never really erased. On pens I have used in the past the eraser feature felt a lot smoother.

Not only does the new Intuos tablet work like a drawing tablet, it is also touch sensitive. This turns the tablet into one huge multi touch  touchpad to control your computer when you are not drawing with it. It doesn’t click like a touch pad and relies on tapping to act as clicking. The tablets knows when the pen is being used and it ignores touches by your hand while using the pen so the tool you are using doesn’t start making random marks. I don’t know that I would use the tablet as my full time touchpad, but it is really useful and convenient when painting with the pen and not having to reach for a mouse or touchpad when needed.

The tablet also has four buttons on it that can be set to do almost anything you want them to. From activating Expose to closing a program. The system preference for the tablet lets you choose what to do with them, as well as the buttons on the pen.

My only other minor complaint has to do with the USB cable. I like to use a drawing tablet in my lap, and have never had a problem with the length of the cable before. I have always been able to connect the tablet to the back of my computer, pull it through my desk, and comfortably lean back in my chair and draw. The cable of the new Intuos does not allow me to that. It only goes as far as the edge of my desk. A longer cord would be appreciated here. For those like me, there is a wireless kit available for the tablet. It is about $40 and allows one to “cut the cord.” Not a bad price for the accessory, but a longer cord would also be a cheaper option. (I did not have one fore review, so cannot comment on how it works.)

Overall, the new Intuos tablet is a winner. It has a beautiful new design, works great as a pen and touchpad, and is reasonably priced. Both sizes come packed with software and other special offers. The medium model I tested comes with Elements 11, Painter Lite, and more! Those two pieces of software alone almost cover the cost of the tablet. If you can’t afford the medium size, I highly suggest getting the small.

For more information visit the product page on the Wacom website.