For a while now Griffin and Crayola have been teaming up on iOS accessories from apps to cases to interactive drawing accessories. The Light Marker is one of these interactive accessories. It is a “marker” for the iPad that interacts with your iPad through the front facing camera and a specific Crayola app available for free in the App Store.

As I mentioned above the pen works with the front facing camera to make it work. It isn’t like other styluses that touch the screen of your iPad. Instead of drawing on the screen, you “float” the pen in front of the iPad aiming the light at the screen (hence the name “Light Marker.” It is hard to describe and hard to do at first. There is a definite learning curve for kids and adults. Once you get the hang of it, the pen works great and is a lot of fun. However, my five year old kept wanting to touch the screen with the pen and I had to continually show him where to keep the pen. If the pen is to close or too far from the iPad it will not work properly. I found about eighteen to twenty-four inches away from the screen works best.

In order for the pen to work you need the Crayola Light Marker app. The app has dot to dot games, a splatter paint game where you pop gallons full of paint, a hidden object game (the coolest of them all), a puzzle game, a drawing game, Â and another painting game called “Scene Starter.” To play the games you hold the pen in front of the iPad and move around and click the button on the pen to interact. Our favorite game was the hidden object game. In it the pen becomes a flashlight on the dark screen and you have to find the hidden object. This, of all the games in the app, gives the uniqueness to the pen. The other games are fairly standard that would be no different with your finger, although they are fun too. The splatter game is pretty cool too. You pick a stencil and pop balloons of color as they float by which splatter paint over the stencil. When you are finished the stencil is pulled back and you have a colorful stencil design from the splattered paint.

My one concern about buyingÂ the pen is how much use will it get. It has that cool factor, but when the novelty of using wears off will it be used much? Also, there will be that group of kids that get frustrated with it and not like it because it is too hard to figure out. My son loved it, but hasn’t asked about it since the day we tried it. An older kid might be more interested. 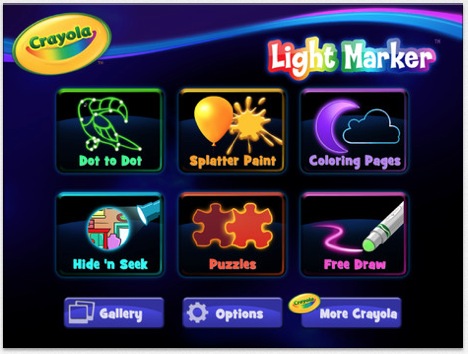 The pen comes with a battery and a little stand for your iPad. My full size iPad held fine in the stand and it makes playing the app with the pen a lot easier. This was a nice touch by Crayola and Griffin to include.

Overall the Crayola Light Marker is a lot of fun to use. At $29.99 it is a little pricey, but if you have a creative and artistic child this might be something to consider for them. They will definitely enjoy it, once they figure out how to use it. The question is how long will they use it and will you get your money’s worth.