Tonido offers an interesting way of accessing all of your Mac’s content from other computers to your iOS devices, for free. Does that make it a no-brainer for every Mac user? 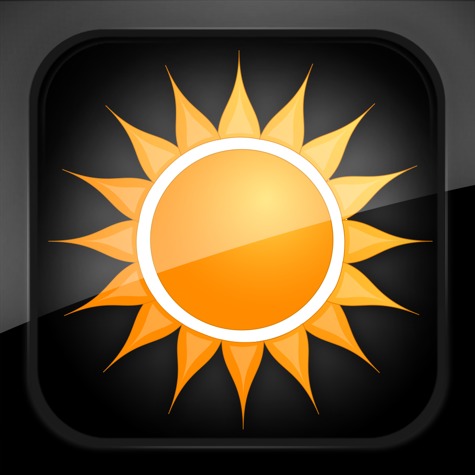 What do you think is more important, executing a large scale concept and enabling something to happen, or refining that execution of concept into something that is both remarkable and satisfying to use? I found myself pondering this question while reviewing Tonido, a remote access application for the Mac and iOS devices. It achieves something amazing, but while it hits the big marks there is certainly scope for a refinement in the way it works.

Tonido allows you to access the files on your Mac (or PC, for that matter) from any Internet connection. You install a free desktop application, create an ID on Tonido’s site, and then run the free universal iOS App. With the correct credentials, you can access the entire file system of the Mac in question over a network, and any file can be downloaded, uploaded or streamed to your device. The iOS application provides full local folder and file management, and can also pass files to other iOS apps using the “Open with…” command. 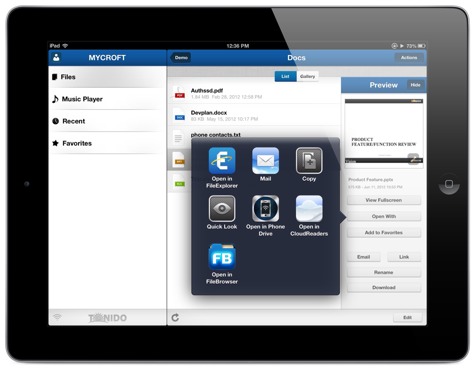 The use of the Tonido ID allows the software to handle IP address resolution transparently, without needing any sort of ISP and router configuration or third party networking service requirements. Tonido’s servers just negotiate connections – your files remain solely on your own devices, rather than being uploaded to Tonido, and encryption can be enabled if you wish. You can also access your files from a web browser on any other computer, and generate remote links to allow individuals to download specific files straight from your computer.

This in itself would be great enough, but there is more. I mentioned streaming – the app can replicate the Mac’s Quick Look function on your iOS device, allowing you to see files such as PDF and Word documents without downloading them. Even more usefully, video and audio will also stream over a network connection – and the Mac client can even transcode files that are not normally playable by iOS into a format that the Tonido player can display. During my testing I found it worked reasonably well – it knows when you are on your local network, and was mostly flawless in the home over WiFi. Over a 3G connection (or worse), I was always able to reach my Mac, and audio streaming remained OK – but sometimes video was defeated by a lack of bandwidth or network congestion. There are background conversion facilities to allow you to tweak your videos for best streaming performance as well. 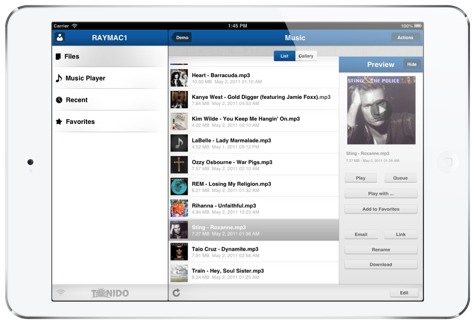 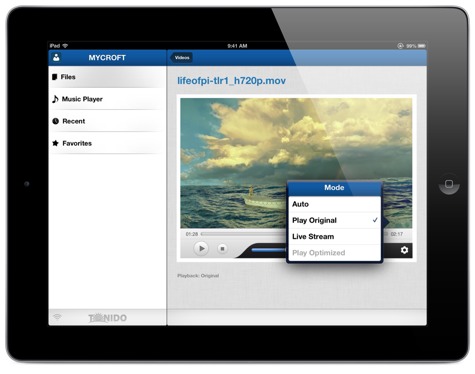 So with simple networking, two way file access, streaming audio and video, all at no cost for personal use – a wholehearted MyMac recommendation? Well, not quite.

The problems with Tonido come from its cross-platform nature. The computer-side application is available on Windows and Linux as well as for the Mac, and all three versions look the same. The iOS app works the same way as well, and is also available with a common look and feel on Android, Windows Phone, Kindle Fire and BlackBerry devices. While a common denominator approach to such apps is not necessarily a deal breaker, with Tonido there is a fair amount of unintuitive terminology and design at play, which makes the app frustrating.

For example, when configuring the application you need to enter your user ID as both a full web URL and a username. Failing to complete these mutually redundant fields returns an uninformative “could not connect” error. Also, creating audio playlists of songs is an arcane process, and for streaming videos there are a variety of obscure playback options available – compounded by the fact that any failure to stream video just gives you a blank screen with no feedback or error to indicate what the problem might be.

There is documentation – but it is fairly terse, and only available online as a web page, with nothing in the app itself. Worse, this web page renders in tiny text on an iPhone, making it a real pinch and scroll fest.

Despite these issues, Tonido can and does deliver much of the time – and given that the whole system is free for personal use I am prepared to put up with my quibbles, in the hope that they will be improved with time. Competing products such as PogoPlug or LogMeIn can provide the same feature set but charge fees of $20 and up, making Tonido great value (though as you might imagine, Tonido does have added functionality as paid options). Certainly if you are after a remote file access system for your Mac I’d recommend you try Tonido first.

MyMac Review Rating 7 out of 10