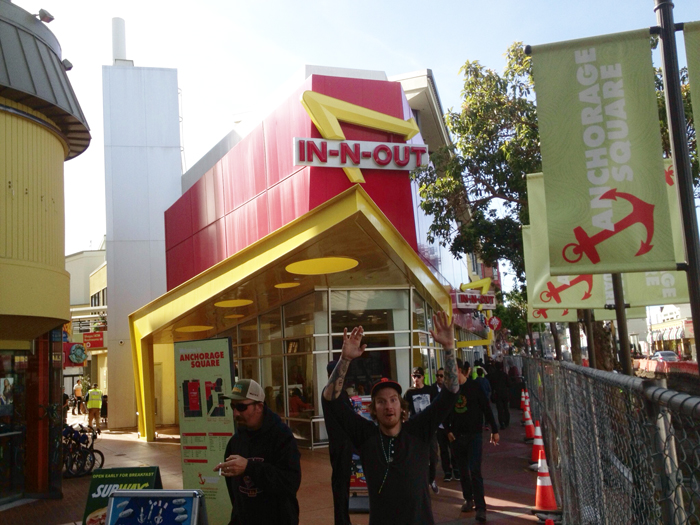 Everyone tired of hearing about my journey to San Francisco for the Macworld Expo yet? I know I’m tired of talking about it. So blaah, blah, blah long trip, snowy roads, attacked by a crazy feline, airport security, bumpy flight, taxicab, hotel. Are we good? Terrific. Let’s talk about something else. My craving for an In-and-Out burger instead.

I’ve been yakking about having gone to the Macworld Expo for the last seven years and having never been to one. Most people who HAVE had one say how good they are. On the east coast of the US, we have a similar burger experience from a chain called 5 Guys. Hand-made burger patties, cut in-store fries, and so on. I’ve eaten there many times and their burgers are very good. Much better than the big boys McDonalds and Burger Kings that you’ll find off nearly every Interstate exit. 5 Guys however lacks a certain something in their ambiance. It’s a grill, soda machine, tables and chairs (though the huge bags of in the shell peanuts to snack on while waiting for your food is a nice touch) with people behind the counter that diligently prepare your burger feast. 5 Guys also puts up copies of the many glowing reviews they have received over the years which seems a little self-serving and they encourage people to write on index cards whatever they want most of which seems to be saying how much they like 5 Guys. So no points for originality there either.

So what makes In-and-Out burger different? Certainly not the decor. The one I visited on Fisherman’s Wharf actually kind of looked like a McDonalds including the color scheme. Currently the streets are being torn up including the sewer lines which upon approaching the restaurant didn’t exactly entice my appetite. However once entering through the front door something changed. The smell of cooking burgers and fresh french fries is overwhelming and I could actually feel myself salivating and the long wait in line (it was near lunch time) made me feel hungrier than I really was. It wasn’t from a lack of staff that made the wait long, it was just the sheer mass of people craving well prepared yummy burgers. The wait staff was very friendly and from what I could see most of the people working there were enthusiastic, young, and smiling which isn’t something you see in most burger joints. 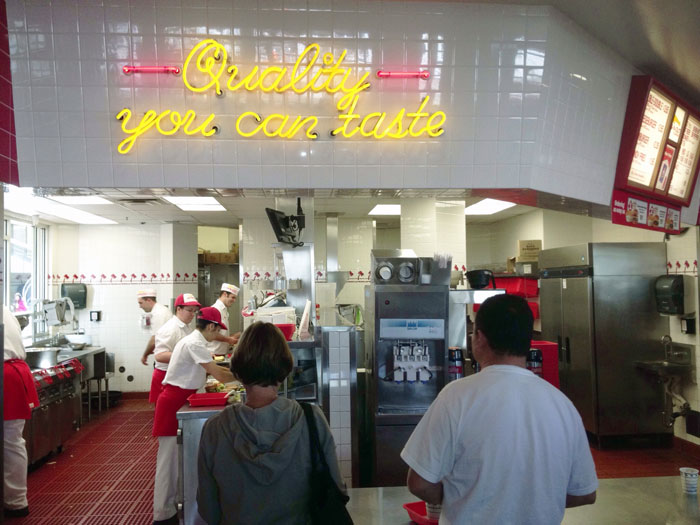 I had some help prior to my visit and a lot of suggestions on what to order. They have the usual single and double ham/cheeseburgers on the menu but there’s something else you can order as well. They actually have a secret menu (not so secret really as it’s on their website) which intrigued me. I ordered a double/double animal style burger. This is their regular double patty and 2 slices of cheese burger, but grilled in mustard with grilled onions and a few other garnishes. The mustard added a different type of flavor to the meat without overwhelming or replacing it. The meat itself was very tasty. Not so lean as to kill the flavor, but not too fatty either. A good mix of burger meat. The patties didn’t seem as large as the ones served by 5 Guys, but that isn’t a bad thing as 5 Guys burgers can be overwhelmingly meaty at the expense of the rest of the sandwich. The bun was nicely toasted without being burned and the lettuce and tomatoes tasted very fresh. The condiments also held up very well against the juicy burgers at least as long as it took for me to eat it…which wasn’t very long. 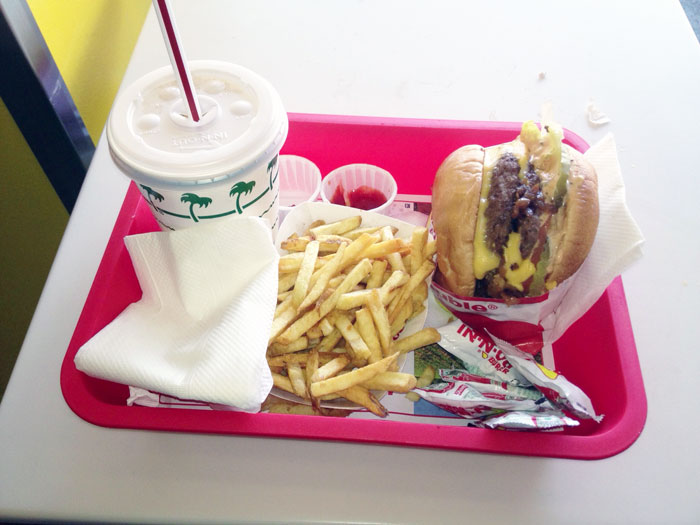 I ordered the fries well done which basically means they double cook them. They were flavorful and crispy on the outside but still had some potato on the inside as compared to say McDonalds fries which seem more like potato shells especially when over cooked (as most of them do). The only disappointment was my beverage also ordered off the secret menu which was a Root Beer float. The Root Beer had little taste as compared to the ice cream of the milkshake it’s made from (which in itself was very good).

My only other complaint was their lack of seating in this location. I didn’t want to go outside with the busted-up streets (and accompanying sewer smell) so I stood eating fries until someone took pity on me and gave me their seat.

In a direct comparison to 5 Guys I’d have to say that overall I liked In-and-Out Burger better. The burgers taste better and the condiments associated with the burger holds up really well. The fries were good (though 5 Guys are just as good…how much can you change basic french fries?), and the only thing not as great was the Root Beer Float which 5 Guys doesn’t even offer (nor milkshakes). One thing I like about 5 Guys that In-and-Out Burger doesn’t have is that I can get A-1 sauce which I suppose is just a matter of taste. I can’t wait to go to In-and-Out Burger again to try some of their different menu choices however the 4 X 4 burger (four patties/ 4 slices of cheese) won’t be one of them unless an instant heart attack somehow becomes a fashion choice.

MyMac review rating of 9 out of 10