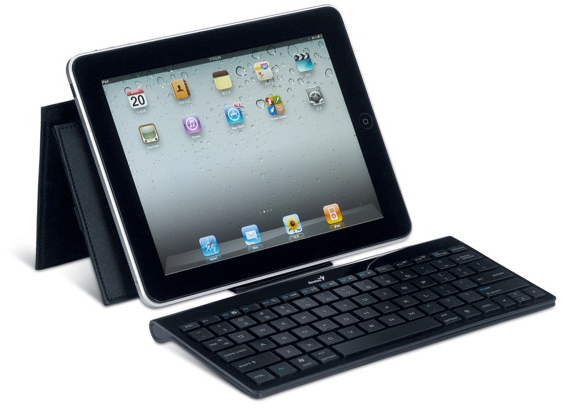 I was recently sent a LuxePad 9100 Bluetooth Keyboard by Genius to review. In a nutshell, if you’re going to use a physical keyboard with your iOS (or other) device, this is a decent unit. However, there are shortcomings, not necessarily of the hardware, that you should be aware of.

The LuxePad 9100 is about the size of a regular notebook keyboard, and the keys are laid out intelligently. I was able to use standard keyboard shortcuts and touch type immediately without having to spend time learning an unintuitive configuration, although I did often hit the right Shift key repeatedly when attempting to hit the tiny up arrow key. Standard PC and Mac keyboard shortcuts for highlight, copy, paste, and navigation shortcuts like next word, previous, etc., are all supported.

Typing on the LuxePad is so much more enjoyable than the on screen keyboard — it’s like comparing apples to Volkswagens. Gone are the annoying autocorrect fiascos and soft keyboard blunders, like my frequent inability to hit the Space bar, always getting an ‘m’ instead. iOS automatically detects the LuxePad and does not show you the on-screen keyboard when paired, so you don’t need to hide it from view, giving back all of your screen real estate.

While the LuxePad 9100 pairs quickly and easily with my iPad 2, leaving a Bluetooth device connected causes serious battery drain on my iPad, even more so than usual after upgrading to iOS 6. If you are a listener to the Pocket Sized Podcast, you know what a joke battery life can be these days, and having a Bluetooth device connected constantly makes it drain nearly twice as fast! You must be sure to turn off the keyboard (which will preserve both devices’ batteries) or disable Bluetooth on your iOS device when not in use. Failing to do so will suck your iPad batteries dry in a very short time. I do not know that this is a problem with the keyboard itself, but perhaps it could go to sleep after a minute or so of inactivity to preserve battery life. If it’s supposed to do that on its own, it doesn’t seem to.

One benefit of the LuxePad 9100’s apparent insomniac behavior is the fact that the keyboard was always responsive when I used it. I never had to tap the keys or re-connect it in settings during a session, thanks to it keeping the connection alive all the time, but I’d happily pay this small price to eek out every bit of battery life that I could.

Another complaint, again, not the fault of the keyboard, is that iOS is still primarily a touch-screen interface, even with a hardware keyboard connected. That means you still need to frequently tap the screen to switch between apps, pull down menus, or do most functions where a tap would be required. Genius does include keyboard shortcuts to go to the Home screen, Search screen, and audio controls, including Play, Pause, Next and Previous tracks, and volume controls. Still, the need to tap is just an annoyance. Messages is a great example, as, unlike on a  PC, when typing a message, I had to take my hands off the keyboard at the end of each message I wanted to send and tap the Send button, as pressing Enter simply added a new line to the message. I was unable to find a keyboard shortcut to streamline this process.

A final drawback is that, by toting the keyboard and its case/stand around, it and my iPad 2 now take up more space than my MacBook Air, power supply and cord not included. If you don’t have a MacBook Air, then this comparison is pointless, but for me, it makes a lot more sense to take a fully-functional PC with me than a tablet if I am doing anything resembling real work. If, however, you can accomplish all you want with an iPad, but will appreciate the ability to touch-type at close to normal speeds, then the Genius LuxePad 9100 is worth a look.