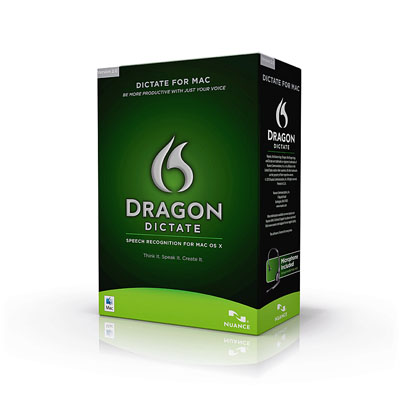 I learned how to type when I was a freshman in high school. Of course, that was on a manual typewriter. Now, decades later, Iâ€™m still typing and just as good and as fast as I did in high school. The only fly in the ointment is the fact that arthritis has raised its ugly head.

The way Iâ€™veÂ  learned to deal with it is to take breaks and when I have to, I just stop typing for a while. However, there are other options. Amongst those options is Nuanceâ€™s Dragon Dictate for the Mac. Dragon Dictate allows the user to speak what he or she would normally type.Â  This permits the user to continue to work without incurring any physical impact. Most Mac users who utilize an iPhone or iPad are more than likely familiar with the IOS versions of the application.

To use Dragon Dictate, you have to have an Intel based Mac, running OS 10.6 or better and a minimum of 2 GB of RAM. Now one does not just sit down and begin to dictate without first teaching Dragon Dictate to learn your individual voice. You do this by providing the software with a sample of your speech so that it learns what your voice sounds like and your way of pronouncing different words. To input your speech, you will need to utilize a USB microphone or by using an IOS device using the Dragon Remote Microphone app. For my tests, I utilized the USB microphone headset that came with the Dragon Dictate software. 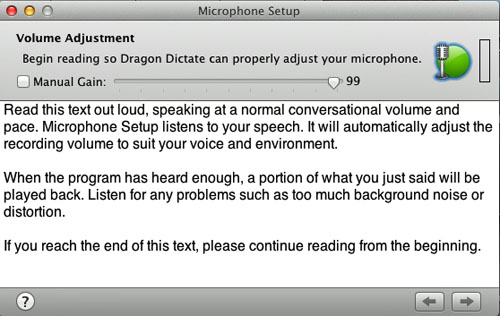 Setting up Dragon Dictate was not hard, nor was it long and cumbersome. Once I plugged in the USB microphone and selected it, I just followed the directions to insert the Dragon Dictate DVD, installed the software on my Mac, registered the software as required and followed the instructions on using the microphone. I then began creating my voice profile. Since I am the primary user, my profile was all that I needed but if other members of my family wanted to utilize Dragon Dictate, they too would need to create a profile. I was also able as the only user to install Dragon Dictate on my Macbook and copy my initial voice profile over to the Macbook and begin to utilize the software while on the road.

The Voice Profile itself only took me several minutes to read through the paragraph as provided by the software, providing a sound level and voice training for the system to utilize. As you are reading and the system is learning, the words you have read will then turn green in the dialog box. If you follow the directions, read the paragraph to include punctuation, you should be up and running in short order.

The really amazing aspect of Dragon Dictate is the ability to verbalize the command to â€œopenâ€ an application. A very good example is the capability while using Dragon Dictate to speak â€œOpen Mailâ€ and Apple Mail application opens. You can then speak â€œNew Messageâ€ and a new message opens, which you can then follow up by speaking your text and end by telling Dragon Dictate to Send Message. Please understand that you will still have to work with the system as Dragon Dictate does not understand a pause within a sentence so you would have to say â€œcommaâ€ or at the end of the sentence say â€œperiod.â€ There are still those times that you will still have to work with your hands to move a cursor to where you want it or to open an application, but overall the ability to utilize speech is an absolute pleasure. The ability to utilize both the application on the Mac and the IOS version, just in case an idea pops into your mind while on the road or not at your desk, makes working on a project or sending an email so much easier.

The more I used Dragon Dictate, the more I liked it. I was really amazed that there was very few items that caused me any issues other than the fact that while Dragon Dictate could handle just about any word I threw at it, there was only one word that Dragon Dictate had a problem with… my last name. It was basically a 50-50 chance that something else would appear on the screen rather than my name. If Dragon Dictate could properly spell â€œSoliloquyâ€, â€œSupercalifragilisticexpialidociousâ€ and â€œindomitableâ€ I figured that my last name would not be a problem. Now I followed the guidance provided both in the manual and in an on-line tutorial but for some reason, Dragon Dictate still had issues with the name. However, having lived my life with everyone messing up my last name, it was a small item as far as I was concerned.

Is the program 100% accurate at all times? No, to be honest. There are items that Dragon Dictate does have issues with when you are speaking. I would say arenâ€™t and got orange; I finally figured out I just needed to take my time. Yet I could say weâ€™ve and it appeared as it should. Itâ€™s a learning process for both the user and for the program.

I will tell you that Nuance does provide a web page with information on Dragon Dictate for Mac, that includes a User Manual, a workbook and other information and links. If you have questions or need further information on how to use the application, take the time to check this out. I have had more fun learning what Dragon Dictate can do by using it and by reading through the User Manual, plus going to Ask The Dictator (http://www.nuance.com/dragon/ask-the-dictator/index.htmwhere) or on YouTube where video lessons are readily available.

My recommendation for those who may have issues with typing, be they medical or otherwise, or for someone who does do a lot of typing, is to consider the purchase of Dragon Dictate. The ability to sit at your computer and dictate a document, an email or whatever it is that you wish to do, is a tool really worth considering.

All in all, I give Dragon Dictate for Mac a My Mac rating of 8 out of a possible 10.