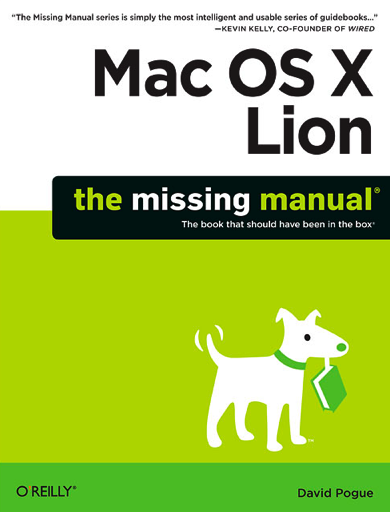 David Pogue’s latest “missing manual” has much in common with the many other “how-to” computer books he’s produced. Like the others, it is written in plain English, it’s readable, at times mildly entertaining, plus comprehensive and marginally useful to the novice user.

Pogue acknowledges at the outset that the Lion Missing Manual is intended primarily for the advanced beginner or intermediate user, but that the sidebars that complement each chapter will be useful even to someone completely new to the Mac OS. True enough, but a beginner would still be better off with a greatly scaled down version of the Missing Manual.

At 909 pages, the book is not so much a manual as it is a reference bible. You’ll reach for it when you want to know how to perform a specific task, such as creating multiple desktops or modifying the Launchpad preferences. In general, the more complex the issue you’re trying to resolve, the more likely it is that you’ll find either the solution or a strong clue buried in the 24-page index.

But the inverse is also true: If you want to do something simple, you may as well just Google your question and search the Internet. My favorite example is the oft-vilified Launchpad. By default, when Lion is installed, it snags all the apps it can find on your hard drive and drops an icon (or shortcut) for each one onto Launchpad. If you have a lot of applications on your computer, you can end up with four or more pages of icons in Launchpad. Overwhelming clutter.

Invariably, many of these will be applications you only use on very rare occasions. If you only use 10 apps on a regular basis, do you really want to clutter up the landscape with page after page of shortcuts? And if not, how do you get rid of those you don’t want to access through Launchpad? That’s just one of the answers missing from the missing manual. A Google search, however, shows that it can be found here.

But supposing you aren’t looking for a remedy to a problem that’s simply annoying. Suppose, for example, you want to learn about the Unix system, the engine that makes the whole operating system functional. You could buy any one of several hefty tomes to learn Unix, but the Missing Manual boils it down in one more or less readable chapter. Anybody who started off in the PC world will quickly get the shakes remembering the DOS command line (or Terminal’s version of it), but others will be ever so grateful to learn little Unix tricks that actually have a with practical value. For example, when a CD or DVD won’t eject and all else fails, open Terminal and type drutil eject and press Return.

If there is any real weakness in this Missing Manual it is mainly attributable to the nature of the beast.Â  Pogue and his staff explain processes very well but at times I found myself exasperated by reading the number of different methods that can be employed to achieve the same result. The two obvious alternatives are to click on an icon that serves as a shortcut to a command, or to enter a keystroke combination, but often there are four or five ways (at least) to get the same results, and Pogue feels obligated to include them all. Sometimes this is like adding too much sugar to a dessert. At some point it becomes overwhelming and unpalatable.

Finally, as I dipped here and there in this 900 page sea of words, I had to keep reminding myself that this particular sea will probably run dry in a year or two. I don’t know when Apple will replace Lion with the next best OS,Â  but we know it can’t be too far off. When it comes along, the indefatigable Pogue will undoubtedly be ready with his next 900-page tome to explain it, and certainly he’d be the first to explain that this is just another twist in an endless spiral of new information. Your IT Department may need all this, but the average user will have most of it more readily available by typing a plain English question in a Google search field.

The Lion Missing Manual is clear but not fancy. It provides good value for those who really want to get below the surface in Lion. Production values are modest, which is to say that all of the book’s images and text are gray scale or black and white. This is not a glossy paperback. It’s heavy enough as it is. Higher quality paper stock would make it even more unwieldy than it already is.