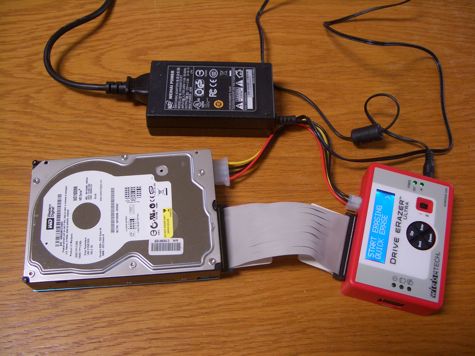 MyMac reviewed WiebeTech’s original Drive eRazer four years ago. This earlier model continues to work well here at Nemo’s MyMac Labs, but it has been discontinued. The new Ultra model adds functionality and versatility to a quest that is dear to every techie’s heart: I can’t wait to erase and reformat that annoying #$%^& hard drive.

When a hard drive is in active use in a working Macintosh, Apple’s included Disk Utility application can easily wipe and prepare it for subsequent software installation. What about when a Mac or Windows computer is dead, except for its hard drive that needs to be erased after removal from the case â€” for personal, business, academic, scientific, or forensic purposes? Enter Drive eRazer Ultra, center stage.

Ultra has more than double the functionality of the original eRazer, justifying the increased cost. Used in tandem with any of the four supplementary 1.8 and 2.5 inch adapters, Ultra can zap every Mac, PC, and iOS SATA and IDE/PATA internal drive you throw at it, erased to both Secure Erase and the U. S. Department of Defense (DOD) standards. Once a drive has been erased, Ultra can function as an external USB drive dock for installation prior to inserting into a subsequent case or computer or iDevice.

Here is the impressive spec sheet.

Here is the FAQ page.

(See far below for additional information on SSDs.)

Here is the 11-page PDF manual.

Spend plenty of time studying this thorough guide. For example: SSDs erased by DEU in any mode would be safe from casual data retrieval attempts.

CRU DataPort wants technicians worldwide to be able to use Ultra wherever and whenever required. Currently, US, UK, Euro, and Australia power plugs are available.

This is a new product, so you won’t have many other reviews of Ultra to help you decide whether to purchase it. If you own, manage, or work in a technical or repair department, Drive eRazer Ultra needs to be on the top of your must-have-pronto list. Once you have it on your bench you will use it nearly every day, and wonder how you lived without it, especially for its speed and efficiency.

Let’s take Drive eRazer Ultra for a spin. Remove contents from package. Affix metal safety plate to old 3.5 inch internal drive. Attach IDE ribbon adapter to Ultra and the internal drive from a former external backup unit. Plug in white power connectors to Ultra and drive. Connect two-part power cable to AC surge protector and side of Ultra. Switch eRazer from o to | to turn it on.

Blue LED display states: START ERASING QUICK ERASE > . I press the up and down arrows underneath the LED to learn about dock info, drive info, and settings. In REVIEW SETTINGS I decide which erase type to use. All these screens are shown in the PDF manual, FYI. I choose QUICK ERASE, because that is sufficient for this particular 3.5 inch IDE 160GB drive.

I press ENTER twice, observe ESTIMATING ERASE TIME on the display (which alone is worth the upgrade from the original eRazer), and wait until it reads ERASING: 2% 43M REMAINING. No jumpers, no brainer, no hassle, and no data â€” 43 minutes later!

Drive eRazer Ultra is silent and cool to the touch of its aluminum high-impact case. The hard drive hums and buzzes quietly, as it returns to the data womb. I notice a small four-page included printed Quick Start Guide that covers the basics, but is not as thorough as the aforementioned PDF manual.

No carrying case is included, and the embedded WEIHAI POWER segment that attaches to Ultra is too short and too flimsy. This product works perfectly as advertised with and without small-drive adapters, but for over $200 CRU-DataPort needs to use a more robust power segment and provide a sturdy tote bag or case.

Connecting my now empty and naked IDE drive via USB to my pre-Unibody MacBook Pro didn’t mount the drive on the Mac. Strange. I double checked all instructions from the company, and I had done everything correctly.

Knowing that USB ports on these older MacBook Pros sometimes don’t perform as well as ports on desktop models, I connected eRazer Ultra + drive + USB cable to my ancient lampshade iMac, and mounting was immediate. I then could use that old iMac to reformat the erased drive.

The USB port problem is rare, so don’t worry about it. All techies have several computers at hand!

Get an eRazer Ultra. It’s a solid solution to a never-ending problem.

Here is well-written, updated information from the company regarding using eRazer Ultra with SSDs:

Drive eRazer Ultra sends data to an SDD in the same way it sends to hard drives. Drive eRazer Ultra doesn’t know it’s talking to an SSD – which is really the point of SSDs, to mimic traditional spinning drives.

How SSDs handle erasure modes depends more on the SSD manufacturer than the Drive eRazer Ultra.

Why is erasure technically different for SSDs?

SSDs, by their very nature, go out of their way to not write over the same bit too many times, because flash memory can only be written to a limited number of times before it’s no longer usable. Because of this, there may be instances of the SSD firmware not committing a write in a literal hardware sense, and instead may simply reorganize bit allocation tables, use compression, and possibly other techniques.

Secure Erase is supposed to give confidence that the drive is erased. Â SSD manufacturers are supposed to know to implement Secure Erase without regard to any flash optimization, streamlining, or other techniques that may normally avoid writing over a bit. It’s up to the flash manufacturer, then, to implement the Secure Erase function correctly. The truth is that flash memory is easy to work with, compared to spinning platters, and so there are a large number of companies making SSDs, and some of those companies may not implement Secure Erase properly (according to our research). We trust the bigger brand names who have been making hard drives for years. But there are small, new companies who we’re less sure about.

Why this is all important?

It’s possible to pull memory flash chips off of SSDs and read them – completely bypassing the drive’s firmware. So if data is still on those chips, recovery may be possible. Keep in mind we’re talking about physical destruction and analysis of the SSD, not something you can do by connecting it to a computer in a normal way. We encourage security conscious customers to read about SSD erasure, and contact SSD manufacturers to learn if their product’s Secure Erase is trustworthy.

What we’re confident about!

SSDs are erased as far as the drive’s firmware is concerned. That means that if Drive eRazer erases an SSD, the drive is erased as far as the computer it connects to is concerned. Barring physical disassembly, the data is gone. Â We are cautiously skeptical at the ability to get any usable data off of an SSD after physical disassembly (a new set of problems is encountered at that point). If a customer can trust an SSD manufacturer’s Secure Erase, this is often the better option. If they don’t know, we would recommend another mode (such as single pass) instead of (or in addition to) Secure Erase

On a related note

We’re very impressed with the erasure security given by SSDs that are also SED (self encrypting drives). We tested SED SSDs from Seagate, and we know that an entire SED SSD drive of any size can be erased in less than a second by triggering Secure Erase Enhanced (supported by Drive eRazer Ultra). The drive’s firmware accomplishes this by destroying the strong encryption key and replacing it with a new one, reducing the data on the drive to gibberish.