If you have an iPhone, one of the past two releases of the iPod Touch, or an iPad 2 you have access to a camera. Depending on your iPhone, the camera is most likely better on the iPhone than you have on an iPod Touch or iPad. However, you are likely to encounter noise in some of your pictures even with the iPhone 4S. Noise can be described as pixelation in the picture which is often caused by poor lighting but can be caused for other reasons. The iPod Touch and iPad cameras will probably give you more noise than the iPhone due to the lower quality camera. In fact, I don’t remember taking a noiseless picture with the iPod Touch.

While there are many apps available that deal with noise and other picture problems, Lucky Clan (the developer of the great ArtStudio and Top Camera apps) has released Noise Master. Noise Master is an app that does one thing and it does it well. The app reduces, and often eliminates, noise in your photos. It does a great job and it is very easy to use.

To use Noise Master you open the app and import a picture from your photo library or take a photo. You than use the one and only slider to to reduce the noise. Sliding to the left applies the filter less while sliding to the right applies it more. There is also a button to see the original image. As I said, it could not be easier. You do have to be careful with over doing it. Too much of the filter can give a overdone look and the picture will look too soft and can even start losing details. If you apply the right amount of the filter you can turn a fair picture into a better one.

It is almost like the app is smoothing the picture. As a result, you do lose a little crispness in the photo. The better the camera the crisper the photo is and the better the result.

When I tested the app I wanted to get the noisiest photos I could so I used my iPod Touch in a very low lit setting. Below is an example. The far left is the original, followed by a touch up, followed by an extreme touch up. As you can see, if you apply the filter too much it can distort the picture, but this can be a cool effect too.Â It would be nice to see a more precise way to apply the filter, perhaps with a way to enter a percent or number instead of relying on how exact you can move the slider. 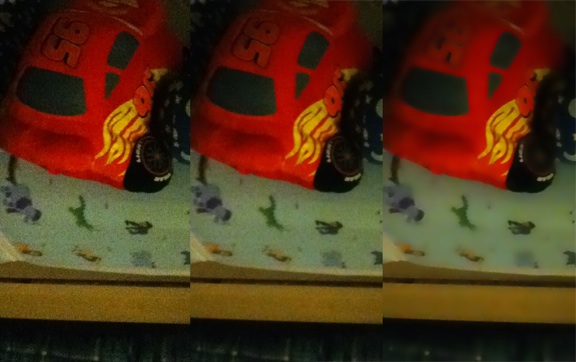 At $.99 the app is a steal and a must have for someone who regularly takes iOS photos. Plus, I forgot to mention it is a universal app. When the price goes up it will still be a great deal, but you might want an app that does more than one thing. Although having an app that does focus on one thing means it will do that one thing really good.