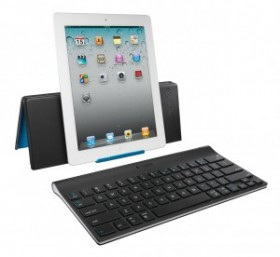 I love my iPad. I truly do and its insanely great form and function blended together in an all around awesomely inspirational touch-based interface makes using it a joy. Just one little quandary. I hate using the onscreen keyboard. Iâ€™m not the greatest typist in the world and when you combine that with no tactile feedback and the big, sausage-like (linkâ€¦not patty) fingers I have from the curse of bigness (trust me in that it is a curse. YOU try finding size 16 shoes sometime) means that I make mistakes and my progress is slooooooow. So I needed to think outside the Apple box and get something to make it more likeâ€¦a laptop. So why not just use a laptop instead? Because no laptop has the battery life of an iPad combined with the all the wonderful types of applications available for iOS. Seemed simple enough. There are plenty of keyboard and cases available for the iPad but finding justâ€¦the â€¦rightâ€¦one proved to be more difficult than I thought. It had to be elegant, useful, providing long life, and a way to interact with my iPad without bogging me down. And so began a quest! A quest unlike any other I had forged in my 39 years (OK, 51 years really but I like Jack Bennyâ€™s attitude toward aging) of life. I would cross streams! Climb mountains! Stand on the precipice of tall cliffs with jagged rocks below! Fight endless hordes of Visigoths who were hell-bent on my destruction!Â  Or, you know, just look online and maybe go to the mall.

Before I begin I should make a confession. I have become a wireless keyboard for the iPad junkie. I came to this conclusion when I recently purchased the Logitech Tablet Keyboard for the iPad. Sure ONE Bluetooth wireless keyboard hardly conveys an addiction, but I currently have threeâ€¦for one iPad. Think about that for a moment. I was SO obsessed with finding the right kind of keyboard that I can use with my iPad that I bought three of them. I loved the first two for a short amount of time and then started seeing major flaws in what they were. Not because they didnâ€™t connect to the iPad or that they lagged when typing (which almost every Bluetooth keyboard will do on occasion), but because their basic design made using the iPad without wanting the use of a keyboard awkward. Before I talk about what this review is for, let me explain what I mean. 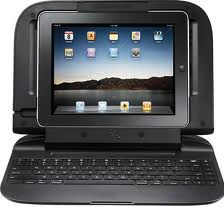 Keyboard 1 for the iPad was the Rocketfish Advanced (as compared to the rudimentary version I guess) Series iCapsule Keyboard. It was about $99 new at Best Buy though I see it Amazon for less than $50 now. Rocketfish apparently has the same problem that a lot of companies have which is marketing people that love to throw in extra words that Iâ€™m sure are meant to impress potential buyers. Which also apparently had some effect on me because I bought one. Itâ€™s a very solid unit made of hard plastic which adds considerable weight to the iPad (more than double) but also protects it extremely well. It essentially makes your iPad a laptop without a trackpad. The weight didnâ€™t bother me much, but I soon found that the layout did. The 30-pin connector was all but blocked and using the headphone jack almost always required removing it from the case. It did give you a full sized keyboard (nice) and was also rechargeable via USB (also nice). You could remove the iPad from the case and there was a slot that allowed for using it in either landscape or portrait mode. What finally put me off it was the blocked connectors and if I just wanted to use the iPad alone what the heck do I do with this huge piece of plastic? Needed a different solution. 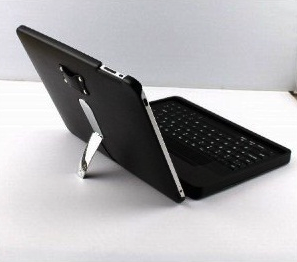 Keyboard 2 for the iPad was a Manotek iPad Bluetooth Keyboard Plus Snap On case for the Apple iPad 3G and WiFi models. No Iâ€™m not kidding, thatâ€™s the name of it. About $60 bucks from Amazon.Â  It looks like nearly every other iPad keyboard case with the big difference being a snap out metal piece on the back that supports the weight of the iPad. The keyboard is the also unfortunately typical rubbery style which I donâ€™t like, but that wasnâ€™t the biggest problem. The biggest problem was that while the iPad was in the case I could pretty much only use it in landscape mode AND if I wanted to use just as an iPad I had a big floppy piece of faux leather and membrane keyboard stuck behind the thing. This was not an optimal solution to problem at hand. I needed something else. Something different. I considered the ZAGG (now also Logitech) keyboard, but getting it and out is a bit of a chore and the metal case that holds the iPad in place, also surrounds the keyboard. Potential ouchies (yeah, I said ouchies. Iâ€™m 6 foot 6 inches tall. Go ahead and give me a hard time about it) as my hands and fingers brushed the hard edge. Visigoths aside, Iâ€™m not a big fan of ouchies. Then one day while shopping at a local big box retailer I saw something that looked like it might finally be the solution. The Logitech Tablet Keyboard for the iPad.

At first glance I wasnâ€™t really that impressed. A Bluetooth keyboard in a plastic case. What was the big deal? Then I looked closer. The case for the keyboard turns into a stand for the iPad. Hmm, a little more interesting. So with almost a resigned air believing this would end being yet another dead end for my search, I brought it home. 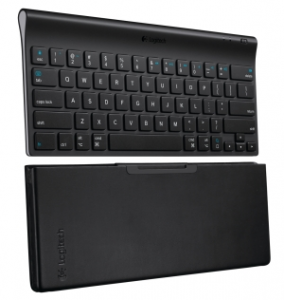 Once I removed it from its packaging, I found a nearly full sized keyboard with real keys. Not that spongy rubber stuff or the membrane type that I donâ€™t care for either, but something that looked like a real keyboard. It has shift keys on both sides, arrow keys, a caps lock key, media controls, and some other nice touches usually only found on real keyboards. The protective cover (magnetically closed when not needed) for it turns into a stand that will hold the iPad in either portrait or landscape mode without blocking any of the iPadâ€™s ports (turn it upside down if you want to have it in portrait mode and use the 30-pin connector). I donâ€™t have to remove anything or flop things around to just use my iPad as an iPad. It was light and easy to slip into the bag I use for my iPad and didnâ€™t take up much room. The stand will accommodate most of the iPad protective back covers Iâ€™ve seen with the possible exception of some of the really thick military grade ones. Thereâ€™s an on/off switch that is plainly marked (make sure you turn it off when not in use) and like most Bluetooth devices, was very easy to pair with my iPad. Overall, a well designed and thought out piece of equipment.

I do have criticisms though. One is that it uses AAA batteries for power. Four of them in fact, however Logitech to their credit does include them (pre-installed). You install them through a small black door on the back of the keyboard. Logitech claims 10 months of battery life through normal usage (whatever that means) though I have no way to verify that in the short amount of time Iâ€™ve had it. I would have much preferred it to be rechargeable, though thereâ€™s no reason I canâ€™t put in rechargeable AAA batteries when the first included set go out. My second criticism is the stand itself. It protects the keyboard quite nicely when not in use, but converting it into an iPad stand is unnecessarily difficult. You have to put two tabs through a designed slot and it feels flimsy like it could easily break. I am VERY careful with it while doing so as if this cover breaks, its capability to be an iPad stand would probably be over and then youâ€™re left with a very nice Bluetooth keyboard, but no way to easily use it with an iPad. Thereâ€™s no reason why with a little caution the Logitech Tablet Keyboard for the iPad couldnâ€™t be the only keyboard youâ€™ll ever need.

Anybody want to buy two lightly used but flawed in concept iPad keyboards?

One thought on “Logitech Tablet Keyboard for iPad”