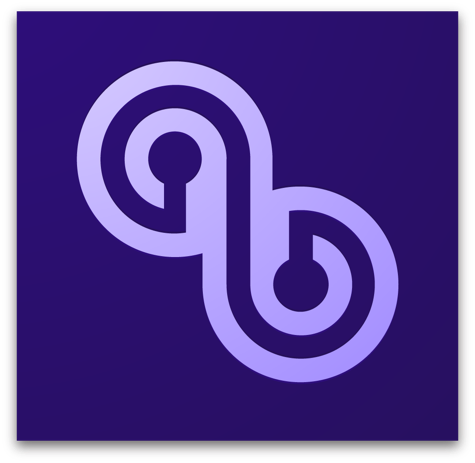 Adobe Carousel is a new paid subscription photo catalog, sharing, and editing service that works between a user’s Macintosh and iOS devices. For this first look Nemo Memo introduction, I tested Carousel on a pre-unibody MacBook Pro Core 2 Duo and an iPad 2.

Macintosh OS X 10.7 Lion is required. For best results, upgrade your iPad to the latest iOS. Both of the above are available from Apple’s App Store. Carousel downloads are free, and installations are effortless on both computer and iPad.

I first installed Adobe Carousel on my computer, launched it, and clicked on Getting Started. Then I logged in with my existing Adobe ID. You must create one if you don’t already have an Adobe ID.Â I then enrolled in a 30 day complimentary subscription, which MyMac highly recommends.

I clicked on Learn More, then on What Is Adobe Carousel, then on More About, and then on Help, to learn as much about Carousel as possible.

Next I installed the iOS version of Adobe Carousel onto the iPad 2. All the interface screens are identical from iPad to Macintosh. Adobe has done a nice job with consistency of the user experience. 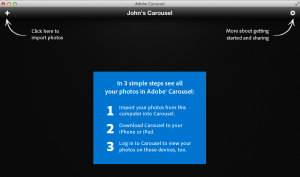 Back on the MacBook Pro, I clicked on the plus sign upper left to import photos into Carousel. I navigated to a folder of images I had placed on my Desktop, and then I clicked Import.

Thumbnail images of my chosen photos, all of them, from the source folder appeared almost instantly in my John’s Carousel black window, organized in tiers by date the photos were taken. A few seconds later the same photos appeared in the same presentation on the iPad. 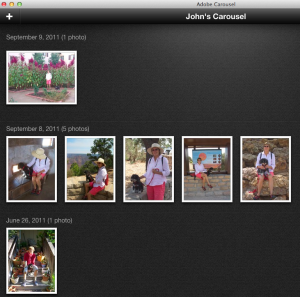 I double clicked on an image thumbnail to open a photo. Several buttons appeared upper right in the Adobe Carousel interface. I added a star to the first photo. 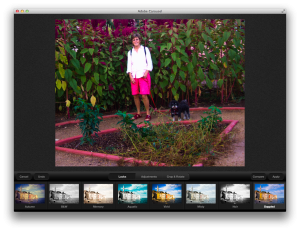 I clicked on a little plus/minus symbol to open up the LooksÂ sampler of pre-set enhancements. This is where all the editing takes place, using Looks, Adjustments, and Crop & Rotate, all underneath the active image being edited. Clicking on Compare provides a handy before/after glimpse of how the latest edit looks relative to how it had been. Clicking on Apply locks in the edit, and Undo removes the edit. 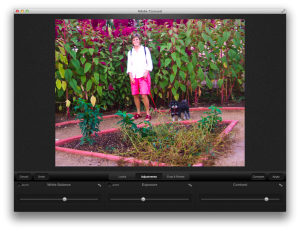 You will spend most of your editing time in Adjustments and Crop & Rotate. Both of these editing areas have multiple ways of improving or ruining your precious photos, so take your time exploring within them. 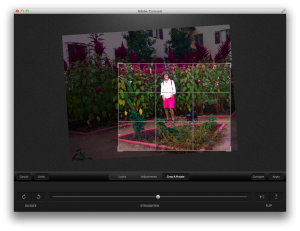 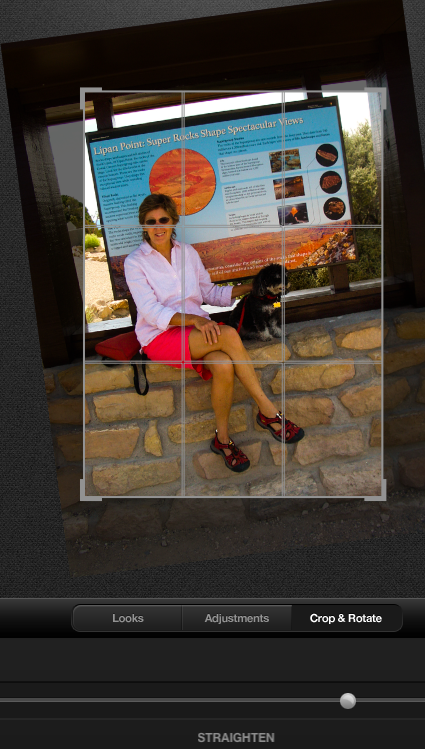 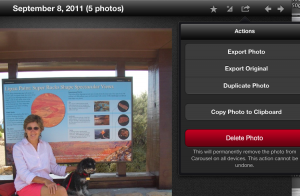 I switched back and forth several times between Mac and iPad. The user experience is so similar that I quickly became familiar with Adobe Carousel on both devices. For example, the different preset Looks are viewed horizontally by swiping sideways on the iPad, and by mousing or swiping sideways using Apple’s Mighty Mouse or Magic Mouse.

There does not appear to be an Undo possible once a photo edit has been applied. I will check with Adobe and update this article, as appropriate.

â€œBecause Adobe Carousel editing is nondestructive, you can always revert to your original photo. Follow these steps to undo photo edits:

1. On your Mac, double-click any photo youâ€™ve edited to see it in Loupe View, and click the icon to enter Develop mode. Then right-click or Ctrl-click the photo and choose Revert to Original.

2. On your iDevice, tap any photo youâ€™ve edited to see it in Loupe View, and tap the Develop button to enter Develop mode. Then tap and hold the photo and choose Revert to Original.â€

Native display color balance and presence differs between MacBook Pro (and every computer) and iPad. For professionals and prosumers this may be a concern, but for Adobe’s intended Carousel customer base this will be of limited inconvenience, relative the magic of multi-device image sharing.

MyMac will have future coverage of Adobe Carousel. For now, it is easy to recommend the 30 day free trial to help you decide if the monthly or annual payment plans are worthwhile.

One thought on “Adobe Carousel – A First Look
Nemo Memo”