Dreamweaver (reviewed elsewhere on MyMac.com) is probably the most respected web design program on both the Mac and Windows platforms. It’s an application that’s respected for its versatility and fluid interaction with web technologies such as Flash, but at the same time it’s more than a bit feared because of its complexity and the steep learning curve necessary to make the application pay for itself. But once you understand the application and come to terms with its idiosyncrasies, Dreamweaver CS 5.5 is the sort of application that revolutionises the way you get work done. The split screen interface for example let’s you edit code on one side of the screen while also reviewing or modifying the finished web page on the other. 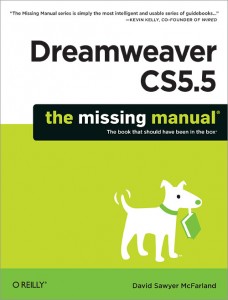 Unfortunately, for those coming to Dreamweaver for the first time, learning how to use the application can be a challenge. The interface is very complicated, with dozens of palettes and even more menu bar items and options.Â  There isn’t a detailed user manual as such, and Adobe largely expects users to either access the built-in help files, or else search the (generally quite good) online support files and forums. This is where Dreamweaver CS 5.5: The Missing Manual comes in.

As you’d expect from a book from the Missing Manual series, the depth and breadth of the material covered is staggering. Excluding the contents and index pages there’s a whopping 1152 pages of Dreamweaver goodness in this sucker, as well as the now standard ‘missing CD’ of online resources available at the Missing Manual website. The text is divided up into six main sections, the first of which is the only one really aimed at relative newcomers to the application. Across 309 pages it goes through the Dreamweaver interface, how Dreamweaver creates and manages web sites, and how to add the key types of web page content including text, links, graphics and tables. Author David Sawyer McFarland tackles all of these in a logical sequence, and while the book doesn’t have the same sparkling, often humorous prose exhibited by some of the other Missing Manual authors, McFarland writes well and clearly explains what’s going on each step of the way.

It’s worth mentioning that this first section of the book isn’t dumbed down in any way, and isn’t a primer for those who’ve never designed a web site before. Rather, this section is more about learning the Dreamweaver language if you’ve never used the application before (or haven’t used one of the more recent versions, i.e., CS 4 or CS 5). McFarland is essentially taking the time to show readers where all the buttons, options and menus they’re looking for are located.

Part Two kicks into high gear by discussing the nuts-and-bolts of advanced web site design. Starting off with three chapters tackling how to use cascading style sheets, McFarland then looks at how to edit HTML code directly in the book’s eleventh chapter, and finishes things off with a chapter on designing sites for mobile devices like cellphones and tablets. These chapters are very much for pro users, and do assume a reasonable level of familiarity with the underlying concepts and technology.

Forms, Flash and other types of interactive and multimedia content are covered in the four chapters that make up the third part of the book. One of the new tools Adobe is promoting is Spry, a technology that makes it easier to add interactive Javascript widgets of various kinds. As McFarland points out, Spry doesn’t make a web page better, but it does add the sort of eye candy web users expect these days, without the web designer having to spend time hand-crafting the HTML or Javascript code necessary to provide them. Tabbed panels, for example, are very popular and provide an intuitive way to arrange web pages on a site that allows users to navigate between them quickly and logically. Chapter 14 has a nice tutorial that shows users how to use Spry to create tabbed panels and format them in various ways. There are various other Spry tricks revealed in this chapter as well, including tooltips, accordions and sortable tables. Dreamweaver also comes with a whole slew of other ‘actions’, Javascript-based tricks and widgets that make web pages more interactive and dynamic, and these are covered in the final chapter in this part of the book.

The fourth part of the book turns away from web design and focuses on site management. This is one of the aspects where Dreamweaver shines, because unlike many other web site design programs that have their own document formats and only export the HTML-based web pages after the editing is done, Dreamweaver is able to import, edit, and manage existing web pages without any problems at all. There’s a shortish chapter on testing web pages and validation, but on the whole this is mostly straightforward stuff looking at the various options and settings Dreamweaver users will need to keep their sites up and running.

Part Five contains four chapters of material that doesn’t belong anywhere else. McFarland begins with two Dreamweaver tools that speed up web design, Snippets and Libraries. Then there’s a chapter on templates, followed by a surprisingly detailed and useful chapter on how to use the find-and-replace feature. The final chapter in this section covers customisation tips, specifically user-configured keyboard shortcuts and the Dreamweaver plug-ins known as Extensions.

The final six chapters span two hundred pages and describe the ‘dynamic’ side of Dreamweaver as a tool for creating web sites that other users can change or interact with, such as catalogues, databases and online stores. McFarland gets things started with a brief review of the various server models around which dynamic sites can be built. Given that this book is about a web site authoring package rather than, say, MySQL, the author does assume a reasonable degree of familiarity with this sort of thing, or at least a willingness to do some further reading from other books if necessary. Nonetheless, the tutorials presented are clear and useful, and by the end of them the basics of dynamic web site design should at least be apparent. Finally, there’s a chapter on XML that rounds out McFarland’s look at Dreamweaver.

Having outlined what’s covered in the book, the question now is whether it’s worth it’s fairly hefty cover price. On the plus side, ‘Dreamweaver CS5.5: The Missing Manual’ is thorough and covers most aspects of the program in sufficient depth to be useful. McFarland writes well, and the order of chapters makes good sense, with a logical progression in both complexity and the amount McFarland assumes the reader will already know and understand. The first five chapters fully live up to the Missing Manual moniker, offering up precisely the sort of information Dreamweaver users will want alongside the keyboard while finding their way around the application. The sixth chapter is a bit less free-standing; though an excellent way to find out how Dreamweaver can be used to create dynamic sites, users will inevitably need one or more additional books on web applications, databasing and security to really make some headway here.

Any negatives? None of significance. The writing style is dry, as has been mentioned before, but McFarland clearly knows what he’s talking about so this isn’t as bothersome as it might be. Some of the illustrations are a bit small and fuzzy, but not so badly the details can’t be seen. Bottom line, a good book on an important application, and highly recommended; MyMac.com rating, an easy 5/5.

One thought on “Dreamweaver CS5.5: The Missing Manual
Review”