When I heard about the Color Studio HD earlier this year I was really interested. A â€œpenâ€ that you can use with the iPad in a coloring app. It sounded great and I couldnâ€™t wait to try it out. Well, recently Griffin sent me a sample unit and I got to satisfy my curiosity. Is it as great as it seemed? Read on to find out.

First, a little more about the Color Studio HD. The Color Studio HD consists of two parts. First there is an iPad app which is free to download from the App Store. The app consists of animated coloring pages. Second, and the main part, is the drawing pen. The pen looks like an oversized Crayola marker which runs on a AA battery. The tip is rubber and the bottom is the on/off switch. It is like a battery powered stylus that makes a humming sound when on. The concept is that you use the pen to color the animated pages in the app.

Â The app itself has two coloring modes. The first is free hand, where you color like you would with a real crayon or marker. The second is what I refer to as â€œFill Mode.â€ This is when you pick a color, tap the area you want to color and it fills with that color. 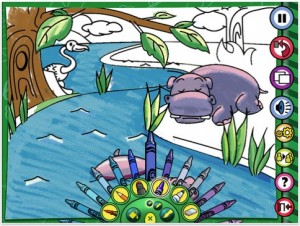 You might be thinking â€œWhy canâ€™t I just get the app and use my finger?â€ You could, but most of the pages will not work unless they are unlocked with the pen. After unlocking you are free to use you finger or pen.

As I said, the concept sounded really cool and I couldnâ€™t wait to try it. Unfortunately, the pen does not work as well as I had hoped. It was very difficult to color with. It has to be pushed down very hard for the coloring to work. On my first generation iPad I had to close all running apps for freehand mode to get the best results. With apps running the coloring would lag behind the pen.

In â€œFill Modeâ€ the pen performed much better. In this mode you push the pen down and once detected the area fills in. It still required a good amount of pressure, but it worked better than freehand mode.

Of course, the Color Studio HD is designed primarily for kids so I let my three year old try it out. He loves coloring apps on the iPad and was really excited when I showed this to him. He could barely get freehand mode to work. He just could not apply enough pressure to the pen. In â€œFill Modeâ€ he was able to apply enough pressure and was more successful. However, it has been several days since he tried the pen out and he has had no interest in using it since (probably because it was so difficult).

I did try to use the app in other coloring apps. While I still had to apply the same amount of pressure, it did work.

Needless to say the Color Studio HD has been a disappointment. It is a great concept, but it just doesnâ€™t succeed and I cannot recommend it.

Note: As I said, I used this on a first generation iPad. I would imagine the lagging issues I had would be gone with the faster processor of the iPad 2, but I donâ€™t know that a faster processor would deliver a more responsive pen with less pressure. However, the iPad 2 is not a requirement of the device.