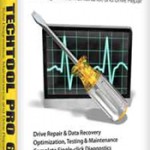 MicroMat’s TechTool Pro has been one of the leaders in Macintosh disk diagnosis and repair for many years. At one time, TechTool was even marketed by Apple as a part of AppleCare. It clearly is one of the disk maintenance and repair heavy hitters, with its main competition being ProSoft’s Drive Genius, and Alsoft’s Disk Warrior.

TechTool Pro 6 (TTP6 from now on) has an impressive feature list. Aside from maintaining and repairing your kitchen sink, it has a suite of diagnostic tests, some of which you may run often, and some you may never run.

The Weeks Division of MyMac Labs spent quite a few hours putting TechTool Pro 6 through its paces. Read on to find out how well it performs.

But first let’s glance at some of TTP6’s features:

â€¢ Memory tests to make sure your RAM is working properly. RAM rarely goes bad, but this will help you find out if you have a RAM problem.

â€¢ Video memory test to see that your Mac’s video card on onboard memory is working properly. This is not one test you’ll need to run often!

â€¢ Surface scan for bad blocks. Over time, hard drives may have blocks go bad. Bad blocks can be replaced with spare blocks from your free space pool.

â€¢ Volume structures checks the state of your disk directory. This is a critical test, and one that you should run more than any other TechTool Pro test.

â€¢ Volume Cloning allows you to make a complete bootable duplicate, or disk image of your drive.

â€¢ Optimization of both files and volumes. File optimization takes files that may be fragmented between thousand of blocks on your hard drive and writes them into one contiguous file. Volume optimization does this as well, but also writes all the files on your drive into one long sequence, thus maximizing your amount of contiguous free space. File and volume optimization will produce some improvement in read speed. But be advised that OS X already does defragmentation of files larger than 20 MB, so any speedup won’t be as apparent as it was during the Goode Olden Tymes of Mac OS 9 and before.

â€¢ Data recovery is a prime feature of TTP6. It can create regular backups of your disk directory, which makes it far easier to recover deleted files. Having a directory backup reduces the need to have TTP6 do a time-consuming scan of the entire disk if you’re searching for a file you mistakenly trashed. This is not a panacea; if the file has been overwritten by another file, you are flat out of luck.

All these test can be run in sequence by using the Check Computer option. Have a good book or a couple of MyMac podcasts ready, as some of the tests take time, especially the surface scan and file structures test. Even a plain-vanilla Mac OS X installation has over 100,000 files, so full disks can have several hundred thousand files that need to be examined one by one.

All these tests can be performed by TTP6 running from your boot drive. But TTP and all other disk repair applications (even Apple’s Disk Utility) cannot repair the same drive from which it is running. To fix a drive, it has to be unmounted (ejected so it’s not visible in the Finder), and you can’t unmount the disk your Mac is running on. This is where TTP6’s eDrive feature proves to be a standout.

Most disk repair applications require you to either to boot off their DVD, or to boot of another drive with their application installed. In contrast, TTP6 has the ability to create a small new partition on your drive without losing any data. This partition contains a full copy of TTP6, as well as Safari, Activity Monitor, Console, and System Preferences.

Once you use TTP6 to create the eDrive, you can boot from it if you’ve been having crashes, and suspect problems, or just wish to be able to repair your disk if necessary. Just boot your Mac and hold down the Option key before you hear the startup chime. A list of bootable drives/partitions will appear, and choose eDrive. Your machine will boot normally using the minimal eDrive system. Once up, you’ll be staring at an eye-hurting, garish yellow desktop festooned with eDrive icons. You may find sunglasses are needed to reduce eyestrain; you’ve been warned.

If you had the foresight to buy and install TTP6 before your Mac exploded, take the time to run the Check Computer test suite. You paid good money for the ability to make backups of disk directories, and I highly recommend turning this feature on.

Whether you boot TTP6 from its DVD, from the eDrive, or from another bootable disk, the action centers around the TTP6 Dashboard. 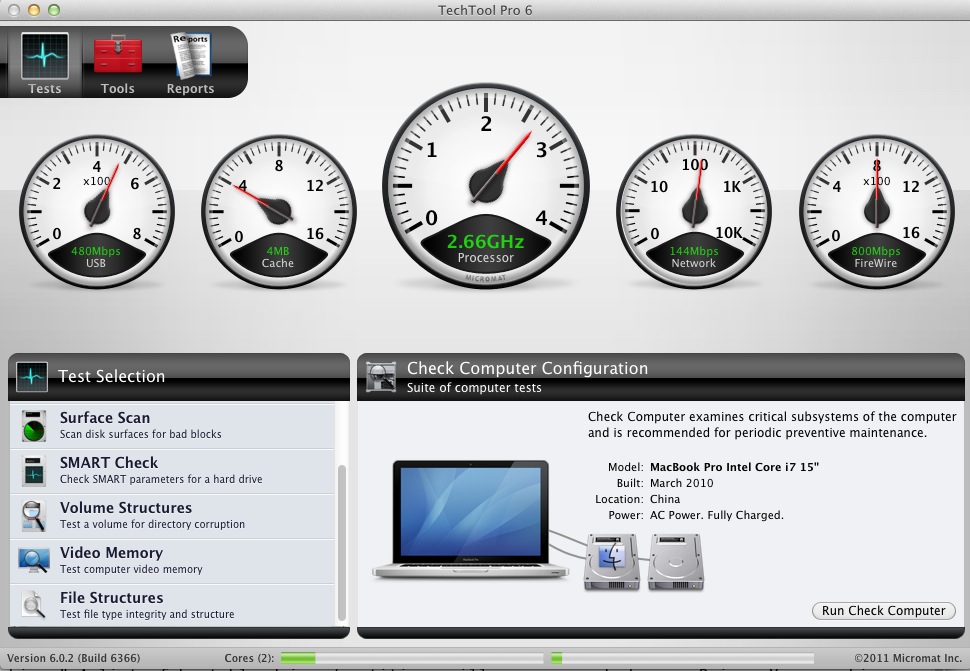 You choose every tool and test from this central location. The Dashboard window is rather large, but this allows for better legibility and ease of locating the various functions. You’ll never need to delve deep into submenus buried deep within contextual menu popups.

We conducted our testing of TTP6 on a 15″ mid-2010 MacBook Pro running OS X 10.6.8. As the dashboard shows, it has 8 GB of RAM, a 2.66 GHz CPU. It does not immediately show that I have added an 240 GB OWC Mercury Extreme solid state drive (SSD), which functions as my boot drive. If you have ever contemplated adding a SSD, let me simply say adding one is a life-changing experience. The phrase “screamingly fast” fails to describe comparisons with a normal laptop 2.5″ hard drive.

As I preached above, I first ran the Check Computer Suite. All tests showed normal operation, the only exception being the File Structures test reported a few JPG files as corrupted. However, but they opened normally. I’m not sure what criteria TTP6 uses to determine when a file is corrupt, but since I had only three, I was not worried.

As soon as the Computer Check was wrapped up, I set TTP6 to turn on Directory Backup. This as well as other features are controlled via a System Preference. 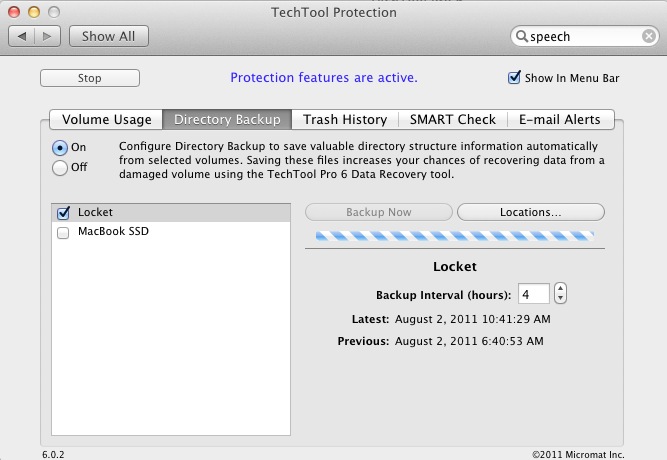 I then activated Trash History, setting the History to go back five days.

When your Mac is running normally, Tech Tool does its work simply and quietly in the background. If you have disk hardware problems, you can get SMART test reports emailed to you. The disk location of files you Trash are squirreled away in the Trash history. If you have Volume Usage ON, and your disk is filling up, TTP6 will let you know.

But what happens when bad things hit the fan? Can Tech Tool Pro 6 save your bacon?

While I’m deeply in love with my OWC Mercury Extreme SSD that’s mounted where the MacBook Pro’s optical drive once resided, it has been a bit… twitchy. Given that I flog my Mac hard, running up to 20 applications at a time, and many of them RAM and CPU intensive (VMWare Fusion), or old PowerPC applications (TCalc), I have my share of times when the Mac burps.

I pulled out Alsoft’s Disk Warrior. It fixed the directory both times when TTP6 and Disk Utility failed. But Disk Warrior is a one-trick pony, as it focuses on fixing directory trouble. It doesn’t do 1/10th of the functions that TechTool Pro 6 does. Disk Warrior won’t be a bit of help if you need to recover a trashed file. But when push comes to shove, my experience is that it can fix some directory damage that TTP6 just can’t handle.

To test TTP6’s ability to recover files, I simply trashed a number of unneeded files, and carried on with work, creating and saving new files to various folders on the SSD. After two days, I chose Data Recovery and Trash History.

Choose the file(s) you want to recover, and click Restore. TTP6 will remind you to NOT save the files to the same volume from where they were trashed, if possible. You are also warned that if you used Secure Empty Trash the restored file(s) will not be valid. Sometimes, files are just gone for good.

TTP6 then creates a folder called TechTool Pro 6 Recovered Files. Inside is another folder named with the date and time of the restore. Inside that folder is the object of your desire; the resurrected file(s) you mistakenly trashed. See if the file opens normally; if it does, praise MicroMat’s engineers and your lucky stars.

Since this review is running long, I’ll address a few other features quickly.

Volume and file optimization on the stock Apple 500GB hard drive went normally. If you have an SSD, don’t use either feature. The reason is explained in good detail in the Knowledge Base section of the MicroMat web site.

I did not have a spare drive large enough to to test the Volume Cloning feature. Nor did I try the Secure Delete feature. Neither of these two features are exotic, and I’d be very surprised if they did not operate normally. Features like these, or features like Audio monitoring, are nice to have, but they’re not the reason to spend $99 for TTP6. In my opinion, the heart of TTP6 is its Volume Recovery and Data Recovery features.

Conclusion
TechTool Pro 6 is a very full-featured disk maintenance suite. It’ll report virtually everything you’ll ever need or want to know about your hardware and disk health. It can alert you to trouble before trouble rears its ugly head. You can recover trashed files, and rebuild damaged disk directories. The eDrive eliminates the need to carry around the TTP6 DVD.

While TTP6 sailed through the vast majority of tasks we set it to, it did fail twice to fix a broken directory. Alsoft’s Disk Warrior was able to fix those two problems. In the best of all possible worlds, Mac users would own both TechTool Pro and Disk Warrior. Does this mean that you don’t purchase TTP6 by itself? Not at all, TTP6 is a far better all-around value than Disk Warrior.

One thought on “TechTool Pro 6
Review”