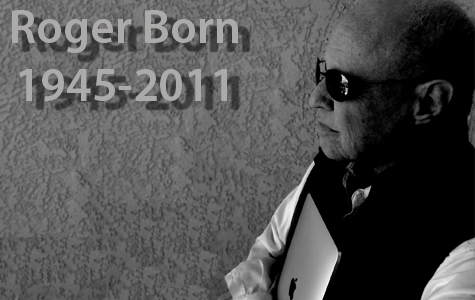 Part of the letter read: “On a person note: it has been, and continues to be, a great honor for me to both know you and provide the means to share your words with the world. No one knows how long we have on this small blue and white planet of ours, but as long as I live, your words will be available to anyone who wants to see/read them. Of that, you have my word. And, as always, my friendship.“

The letter was to Roger Born. It accompanied a brand-new iPad some of Roger’s closest online friends had purchased for him a year ago. Roger, at that time, had his battle with cancer take a bad turn. None of us knew how long he had left, but with mounting medical bills, and his wife Connie the sole source of income, we knew the chances of Roger being able to buy an iPad were slim. And who more deserved an iPad than one of the kindest, gentlest men I have ever known? In fact, Roger predicted the product more than two year prior, when he wrote in the comments section on an article at MyMac.com:

It is called iPadd. It is an ultra-thin tablet, about 8 inches, measured diagonally, and it works like an iPod Touch. The iPadd is designed to fit the niche between the iPod and the MacBook, and is priced between them as well. We’ve all seen them before, on any Star Trek episode.

If you want one, you will have to get in line behind me. =)

And that was Roger. Predicting the future, albeit not perfectly, close enough for horseshoes and hand grandees.

On Friday, after a long day of work and driving over three hours back from Chicago, I found an email from Roger’s son, David Born, in my inbox. It read:

Roger Born (my dad) Passed in peace this morning with my mom by his side. I know the forums meant a lot to him and he was so grateful for his iPad. I will be finishing up his books to publish soon and wanted you guys to know.

Crushing sadness. The world is indeed a less joyful place without Roger in it, as any who has known him can attest.

I first “met” Roger when Beth Lock, a long time MyMac writer, sent him my way via an article submission for the then “MyMac Magazine”. Roger had found some of Beth’s writings online, and they became fast friends. Roger was no slouch as a writer himself, and in fact would go on to become one of our most prolific and popular writers in the 2000’s. From Apple related articles to creative writing, few could match either his output of content, or his creative genius. And yes, I used the term genius, and I don’t do that lightly. Roger was just that. Not only did he think outside the box, for Roger, there was no box.

While we didn’t agree on everything, I never put conditions on what Roger could write about. He saved his more religious writings for his own website, RogerBorn.com, and mainly stayed the course at MyMac with his tech articles, reviews, and creative writing. But that was not enough for Roger, and his faith and religious views needed more of an outlet.

While battling cancer, Roger had seen many sad stories from the staff at MyMac in his eleven years here. And not once did he waver in his desire to comfort and help others, either through deeds or words. Not even when his own health, and indeed his very life, was at risk did he show anything but compassion and friendship to others he had never even met in person.

I am fortunate to have met Roger in person on three separate occasions, all of which took place in San Francisco during the Macworld Expo’s. The first, in 2000, was the only one in which Roger seemed completely healthy and able to walk the showroom floor. He had an aura about him that made everyone around him feel good. Just one of those guys people like, without knowing why, immediately upon meeting him. Maybe it was his easy smile, the warmth of his handshake, or the honestly in his eyes. Whatever it was, you knew when Roger was there, and the world felt a little better for it.

A few of the MyMac writers wanted to chime in here as well.

Rich Lefko:
Though I never met Roger we used to communicate through email.
Roger would send me the stories he was writing and ask my opinion.
The first time he sent me something I sent him a reply and said “Why me, who am I and what do I know?”
He wrote back that he thought I was a good writer and he just wanted my opinion.
That went on for a while. Roger had quite an imagination and as I read some of things he would send me, it almost seemed to me that he wished that some of things he wrote could be true.
I knew he was sick, but he never really spoke about it, except to acknowledge that each day was a wonderful thing. A lesson I wish I could take to heart and embrace as Roger did.

It’s funny how you meet people nowadays in the cyber world. You can make friendships that ten years ago simply were not possible.
I will miss Roger’s emails and our online conversations. The world has lost a decent man who, it seemed to me, harbored no ill will towards anyone or anything.

Roger’s mind inhabited the intersection of technology, religion, science fiction, and humor. He was serious when he was being funny, which was most of the time. He had far-flung ideas that made perfect sense. His philosophy was infused with a Christianity that found a comfortable home within his existence.

Most of us knew Roger best through his writing. He wasn’t as much of a conversationalist as he was a thinker and writer. Roger was very expressive in his personal and tech prose. No one wrote better, or with more vitality.

He didn’t want his published writings to be filtered through an editor, even a benign one. Roger wanted his collections of words to be like a slowly moving river whose course could be altered a little farther downstream. He reserved the opportunity to update stories and articles when new information became available.

Recently he adopted an alternate identity, often called Roger1, as a character and pseudonym. Roger1 was very prolific, freeing the actual Roger to distance himself from any obstacles to publishing. Roger1 wrote and was the protagonist in a book-length sci-fi multi-chapter essay with a rambling story line that was probably influenced by the chemotherapy he was experiencing.

Roger could write quickly and he could write in large quantities of words, but he was always lucid and focused. He was comfortable creating original pieces, and with aggregating bunches of comments by others into coherent multi-voice threads.

For over ten years many of us enjoyed knowing Roger through his profuse email messages and posted stories. He averaged a hundred email communications each year, in sickness and in health, to his MyMac pals, on an endless range of subjects. Messages from Roger were always treasured.

He was warm-hearted in his words, which isn’t easy to do with consistency. He made friends and kept them. Roger was the genuine article, the real deal, the one whose words will stop but whose personality will live on as a gift to all of us.
Carmel Glover:
The world has lost a treasure in Roger Born and his passing affects me deeply. He was the dearest, kindest and most generous of men. His Christian faith was not just a belief, but an enduring way of life. ‘Love one another’ ran through the core of his being. My personal experience of this came a number of years ago when my family was undergoing very difficult times. Roger offered to send me $1000. Roger himself had been out of work for some time and had just begun a new job. The $1000 would have come out of his first pay. I did not take up the offer for I knew his own family needed it as much as I, but this generosity of spirit from one on the other side of the world whom I had never met was a great support to me.

I’m not sure exactly when I first encountered Roger … some time in early 2000 perhaps. He has been a steady influence in my life ever since. I shall miss him greatly.

Elisa Pacelli:
I’m still relatively new with MyMac, about 1 1/2 years. Roger was one of the first to welcome me to the MyMac family. He ALWAYS had a pleasant comment for all the writers, no matter what the topic being discussed on our internal mailing list.

One of my son’s graduated a few weeks ago with his masters degree in education. Of course being the proud Mom, I posted a picture of him in his cap and gown. Roger sent his congratulations and support, while expressing his admiration for the profession and for Connie (his wife), saying, “Connie loves teaching and she excels at it.” Always a kind word.

Roger would end his emails with, “Love, Roger.” That says it all.

He will definitely be missed.

Finally, I want to send out my own personal condolences to his family. His wife Connie was very kind to keep us informed on Roger’s condition over the last year, and it is to her I am sure Roger is the most missed. You had a great man, Connie, and I know he loved you and the children very much.

One of the last emails I received from Roger, about a month ago.
From Roger himself:

Tim
From four week stay in hospital w successful gastric bypass.Â Product of last stage cancer.Â I trust my Father for a little more time here to care for my wife.Â And to remain with all of you.Â Share this as you see fit.