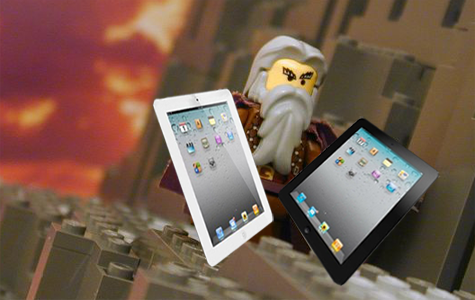 It’s no secret that I like Apple products. The only computers in our house are Macs, my wife and I both have iPhones, and I was in line to buy an iPad 2 the day it was released.

I don’t consider myself an unthinking Apple fanboy, however. Sometimes Apple products have problems. Sometimes Apple wants to protect me more than I want them to. And I will admit, as much as I love my iPad now, when I first tried my Dad’s original iPad, I was slightly underwhelmed. I didn’t need one right away.

Therefore, I found myself getting a little annoyed recently when, after mentioning something about an iPad game to some co-workers, I found myself being called an Apple fanboy who throws my money at Apple, and being told that the iPad is an overpriced piece of junk. As the rant went on and on, I started feeling like this was the most intense tablet bashing since Moses tossed the ten commandments down the mountain in anger.

I don’t mind people having different views and liking different things than I do. I’d hate a world where we all thought the same things and had identical tastes. I do take exception to being told that just because I make different purchasing decisions than someone else that I am stupid and careless with my money, and that I clearly have no taste.

One of my co-worker’s main rants was that tablets are redundant. His assertion was that his Android phone and his laptop were all he needed. Clearly anyone who preferred to use a tablet instead of a phone or laptop for certain things was off their rocker.

I lost interest in the conversation pretty quickly. It’s not my job to tell others what to like, and I can understand why not everyone sees what use a tablet is. But it did get me thinking about why my iPad seems more useful to me for certain things than either my iPhone or my laptop.

Right now I am writing this article on my iPad using an all called iA Writer. The nice thing about writing on the iPad is that it focuses my mind wonderfully, much more so than writing on the laptop.

It’s purely psychological, but having nothing on the screen but the virtual keyboard and my text in a large, monospaced font really does help the words flow in a way that more than makes up for the fact that typing on the iPad is a sorry imitation of gliding my fingers across the MacBook Pro’s wonderful keyboard. There are full screen word processing apps for the Mac that also help to remove distractions, but for some reason the iPad naturally does this so well that there’s no comparison for me.

Writing aside, there are several other more mainstream activities that are just much more enjoyable to me on the iPad than on other form factor devices. And when I think about it, part of what it does well with those activities is also what it does well for writing. It helps focus the attention and personalize the experience somehow.

Reading is a joy on the iPad compared to either a laptop or a phone. The iPad is my much preferred gaming device. Surfing the web? iPad, please. It just feels easier and more natural. And the iPad is my new Netflix consumption device for those times I don’t have access to our Apple TV and Sony LCD TV, either because I’m not home or because another family member has a different viewing preference at that time.

The iPad has replaced my laptop for all but the most computing intensive activities that I need to do. I still need the Mac for photo editing in Aperture, for video editing and exporting for video from my DSLR, and of course for recording and producing my podcast, but for almost everything else, the iPad really is my choice of computing device. Oh, I did do my taxes on the Mac. No valid alternative on the iPad for that chore yet.

I think one reason a tablet works better than a laptop or desktop computer for reading, web surfing, and for watching video is that a computer separates you from it by shoving a keyboard between you and the screen. In doing so, it makes the computer an action device. The keyboard and mouse are meant for DOING things, and they makes it hard to mentally relax and consume rather than wanting to click and type and move things around. Again, the tablet form factor helps focus you and remove distractions.

Granted, iPads are not cheap. Mine was $700.00. One of the things my angry co-worker kept mentioning was price, and that game consoles were cheaper. I replied that yes, for everything that I do on the iPad, there is something cheaper that does that same activity. Sometimes the iPad is better at that thing, sometimes not. But the iPad does many things, and does them all from acceptably well to extremely well.

The one thing about an iPad that no laptop, phone, e-reader, or game console can match is how great it is to hand off to a young child for them to play their games on, read books on, or even just hold and watch video with.

My daughter knows how to use the laptop, but it’s so much easier and more fun for her to use the iPad. It’s lighter. It generates less heat. The battery lasts forever by comparison. And while I initially figured she would continue to prefer the iPhone for its convenient one-hand size, she likes the big screen of the iPad a lot.

My wife hasn’t really warmed up to using an iPad instead of a laptop yet, but the truth is that for most families, it’s a top notch family device. It’s light, it’s fun, it does many things well, the battery lasts a long time, and it is cheaper than any laptop that I would care to own. My angry co-worker doesn’t have a family, and a lot of his argument was based on the faulty premise that everyone is like him. I’m not, and don’t want to be, frankly.

The iPad has changed how I read, browse the web, get news, interact on social networks, watch movies, and more than anything, play games. It’s something you can’t really wrap your head around until you’ve tried it and then it just clicks, and you’ll find yourself enjoying those things it does so well more than you ever did on your phone, laptop, or gaming console.