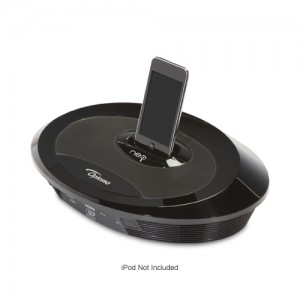 Two kinds of computer users need a projector: those who make group presentations, and those who want to listen to or view media with friends and family.

If you belong to one of those groups, Optoma’s Neo-i iPod/iPhone Dock Projector might be the right gadget for you. The Weeks Division of MyMac Labs gave the Neo-i a workout, and here’s what we found.

The Neo-i is a shiny, black saucer-shaped unit approximately 13″ x 9″ x 3″. It’s all plastic, but it has enough heft to avoid feeling cheap. The top has an iPod/iPhone dock connector. Thankfully, Optoma includes several adapters to fit various types of iPods and iPhone. But if you’re an iPad owner, you need to buy an optional iPad adapter. If you need an HDMI cable, that’ll set you back a few more dollars.

The back of the saucer has VGA and HDMI ports, as well as the usual plug for the power adapter. A very tiny (I had a hard time spotting it) On-Off switch lives on the back panel as well. Directly above the back panel is a very cool LCD control panel that illuminates when you touch it. You can control almost every aspect of media playback and Neo-i system settings from the LCD panel. But you’ll rarely use it, as the included remote works better, and is much more convenient.

Playing back media from your iPod/iPhone is just a matter of placing the iPod in the dock connector, powering up the Neo-i, choosing iPod/iPhone from the Source menu, and using the iPod/iPhone controls to commence playback. No external cable or connection to a Mac or a PC is required.

The Neo-i is a projector, so I tested it by watching Walt Mossberg interview Steve Jobs during the 2010 All Things Digital presentation.

As with any projector, the farther the projector is from the wall or screen you’re projecting onto, the bigger the image. Of course, the further away from the screen, the dimmer the image. I experimented with different distances, and found the image pleasantly bright until the Neo-i was roughly 10-12 feet from the white wall that served as a screen. This was in a dim, but not dark, living room in the middle of the day. At 10 feet, the projected image is 70 inches wide and 39 inches high. I found the best balance of brightness versus size was when the Neo-i was about 6-7 feet from the wall.

Sound quality from the Neo-i’s speakers is good, but not great. Given the small size, Optoma does a creditable job getting decent sound outy of the Neo-i. They’re substantially better than the built in speakers on my early 2010 MacBook Pro, as they can produce much more volume, and have more presence. But they’re a bit boomy, with exaggerated bass. The extra volume is needed when you’re trying to fill a room. The Neo-i won’t be loud enough in a large conference room, but it should be satisfactory for an audience of a dozen or so in a medium-sized room.

The Neo-i does have a cooling fan for the projection lamp that will be noticeable, but I did not find it objectionably loud.

The Neo-i can live a double life as a computer projection device. In spite of the “iPod/iPhone Dock Projector” moniker, the Neo-i performs perfectly well for displaying your computer’s screen. Why Optoma hides this ability is a mystery!

I connected the Neo-i to my MacBook Air using a Moshi Mini Displayport-HDMI adapter and a stock HDMI cable. After the usual 30 seconds of fiddling with the Displays preference panel, the Mac recognized the Neo-i, and I turned on display mirroring, as well as redirected the Mac’s sound output to the Neo-i’s speaker.

You’re now able to project whatever is on your Mac’s screen using the Neo-i: presentations, movies, spreadsheets, or whatever you desire. Movie projection worked well, and the sound quality is much better than the built-in speakers.

The Neo-i works well for both computer and iPod/iPhone video projection. What’s not to like?

The main objection is the price. A list price of $449 is expensive. Granted, good projectors are not cheap, but by the time you buy a HDMI cable, you’ll be spending close to half a grand for a Neo-i. The quality of the unit is very good: The Neo-i-i uses the exact same light engine and optics as the the Optoma’s PK301 projector, Optoma’s top of the line, palm-sized Pico projector which sells for $399. With the Neo-i, you get the dock connector and stereo sound for the extra money. The Neo-i is available for quite a bit less if you shop around on-line, but it’ll never be cheap. That kind of price pushes the Neo-i waaaay out of the impulse buying price range. I strongly suspect the typical Neo-i buyer will be a small company that uses it in-house, or an road warrior employee who needs to make presentations to small groups on the road. Then again, if you’ve spent big money on equipping your home theatre to incorporate your computers, the extra dollars for the Neo-i won’t be a hardship, and you’ll gain much flexibility. If you’ve got the scratch, this may be the projector for you.

Conclusion. The Optoma Neo-i projector is a well-built, small projector that does a good job projecting video in small to medium sized rooms. Audio quality is good, if a bit too bassy. It’s easy to use, using either the built in controls or the included remote. Itâ€™s expensive, but if you’ve got the bucks, it may be the tool you need.

MyMac.com review rating 7 out of 10