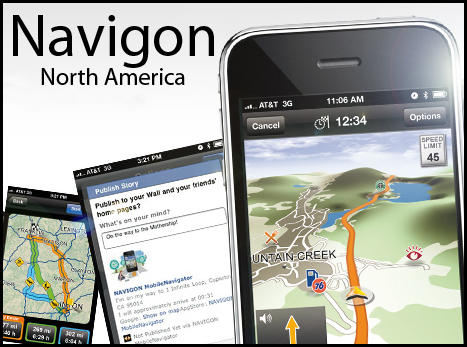 I have been using NAVIGON MobileNavigator North America for the last couple weeks. NAVIGON NA is a GPS app for Apple’s iPhone. Unlike the built in Google Maps app, Navigon provides turn-by-turn directions, similar to Google Maps on Android devices, or TomTom.

The first thing I noticed about NAVIGON NA is that the app isÂ 1.6GB in size – by far the largest iPhone app I’ve ever installed. This is because all of its map data is preloaded into your system and, unlike Google Maps, it does not require an active Internet connection to navigate. This is especially useful in areas where there is poor or no cellular connection, like many parts of my home state of Vermont. The fact that all of the nav data is on the device also cuts down radio/FM interference when in a non-3G area if you use an FM iPod adapter, such as my aftermarket Harmon Kardon drive+play.

The user interface is fairly intuitive, normally requiring you to enter addresses part by part. For instance, if you want to find a coffee shop, you could choose to search for a POI (point of interest) from the home screen, then a category, e.g., “Restaurants,” an a subcategory, e.g., “coffee shops,” and then find “Breaking Grounds.” Unfortunately, my coffee shop did not actually show up in NAVIGON’s database, but there is also a Google interface (when you do have an active data connection) as well. Similarly, searching for a location by street address starts with the state, then the city, then the street, then finally the street number. I found this interface to be intuitive, but somewhat clunky at times, and would haveÂ prefered the ability to just enter a street address, e.g., 245 Main Street, Bethel, VT instead of State, City, Street, Number.

NAVIGON auto-adjusts routes seamlessly when you miss a turn, suggesting alternative routes on the fly within a few seconds of missing a turn. It also displays posted speed limit wherever you are, and optionally alerts you when you exceed it by a certain amount. I was not able to determine exactly what percentage or the number of miles per hour by which you need to exceed the speed limit to trigger its audible alert of “CAUTION,” but I did find it useful at times.

Another benefit over the standard Google Maps application is that NAVIGON supports rotating the screen 90 degrees (into “landscape mode”), if you prefer that view. NAVIGON also supports 2D and 3D modes, as opposed to Google Maps on the iPhone.

As for navigating to points of interest, I was disappointed to find that NAVIGON took me to the wrong location two out of the first three times that I used it, getting me within about a mile of my destination before informing me that I had arrived. It never failed to accurately navigate me to a street address, but its POI navigation obviously has some flaws.

One feature that I did not understand was NAVIGON’s “simulation mode,” which you can use when the GPS signal is weak. The reason I did not appreciate it was because every time I used simulation mode, it always assumed I was within very close proximity of my destination. For example, if I tried to find a store in the next town over, it would assume I was already in said next town, as opposed to the location where it last detected me, or one of my own specification.

I was unable to review the mounting hardware which NAVIGON was supposed to send me to review, as they either never sent it or I never received it.

In summary, NAVIGON NA is a useful application if you require turn-by-turn directions. NAVIGON NA is available as a universal app for iPhone, iPod Touch, and iPad in the iTunes App Store for $59.99.