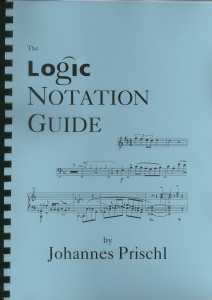 Apple’s advanced Digital Audio Workstation, Logic, actually began life as software written by C-Lab, Emagic’s forerunner, to enable musicians to use the computer for conventional music notation. Indeed, it was originally called ‘Creator‘, then ‘Notator Logic‘ and now, of course, ‘Logic‘. Along with Logic‘s ‘Environment’ (an immensely powerful way to have elements in the music-making process link together), Logic‘s Score Editor is perhaps the least understood and generally most underused component of the software.

Johannes Prischl, who’s based in Vienna, has been intimately involved with Notator/Logic in general – and the notation component in particular – Â since 1988. Indeed, he wrote early documentation for Emagic’s notation components. He also wrote a separate book, “The Logic Notation Guide” (LNG), which extends and supports the relevant documentation which users of Logic get with the software from Apple. The LNG is sufficiently detailed, thorough and useful to warrant evaluation in its own right. It could also be said, in fact, to be essential reading for anyone who wants to use the Score Editor seriously. It will help them enormously.

The LNG is a comb-bound softcover book with over 200 pages of closely-packed (yet never unreadable) guidance on making the most of Logic‘s Score Editor. Strictly-speaking, its substance, examples and concepts apply to the last major version of the software, Logic 8. The book bears a copyright notice of 1998; the screenshots are from a pre-OS X version of Logic; and there are references to the now defunct Windows versions.Yet – as most Logic users know – the Score Editor has acquired something of a Cinderella status, has been somewhat neglected in recent revisions and has several shortcomings that it is to be hoped will be addressed in the next major release. This means that this “LNG” is still 99% relevant to those wanting to use Logic‘s score editing functionality. What’s more, the active and responsive, friendly and painstaking support that Prischl extends to his book’s users makes “The Logic Notation Guide” the best resource of its kind on Logic‘s Score Editor.

It’s divided into no fewer than 19 substantial chapters with a two-page alphabetical index. Those who buy the book also get access to downloadable files which can be used to work through LNG’s examples, and which contain updates to the text. This is – in short – enough of a package to provide you with almost everything you’re ever likely to need to know about the Score Editor and make the most of its powerful functionality.

Chapters do lead you through the process of notating music from a very practical point of view. This the Apple manual does not. They assume some familiarity with the conventions of musical notation. But the pace of the LNG is measured, appropriately detailed and highly approachable. The language of the book is expert without sounding aloof. It relies on (justified) authority and precision, not on coaxing. Some of the material is complex. Prischl sails through it all and gently brings his readers with him.

The LNG is a book written from a musical perspective, rather than a technical one. And rightly so: priority is given to what the musician wants to do; only then to how the software enables them to do it. The LNG is not another dry tour through the Score Editor’s functionality. That’s the approach which the Apple manual (with which it helps to be at least reasonably familiar) tends to take. Prischl’s in depth knowledge of that functionality, though, is impressive. Throughout the book, he draws in tips, tricks, workarounds, wrinkles and ruses from (and ultimately for) those in the know. This approach adds to the book’s significant appeal. Given the advanced nature of Logic, there are frequent occasions when the author extends his coverage into quite advanced topicsâ€¦ ossia bars, changes to stem length and muted folders and sequences. These are all dealt with equally expertly; in common with all the other material and topics in the book,

Prischl accurately cross-references other relevant and/or supporting treatment.This cross-referencing and extremely tight yet flexible organization of the material is not easy to achieve: Logic is renowned for supporting multiple ways to achieve resultsâ€¦ key shortcuts, conventional menus, context-sensitive menus, preferences and so on. Yet Prischl’s book manages to stay on top of all variations. This makes it as useful a reference tool as it is clever set of tutorials. Indeed, the comb-binding comes into its own as you start to rely more and more on the book as you work – it’s easy to lay flat and even review single pages as needed.

The author’s intention is in part that you begin with the most important, fundamental, concepts (understanding View Modes, Display Levels and Instrument Sets is essential; these topic are covered in the first chapter) and progress in what is really a very sane and sensible way through the book until you are familiar with leadsheets, the niceties of layout, some special situations and score exporting from 150 pages later onwards. Along the way, you’ll learn techniques for all levels of editing, managing note length and rhythm/time and key signatures, independent symbols, text, parts and such markings as trills, tremolo and arpeggio etc.

What makes “The Logic Notation Guide” such a valuable resource, though, is that these topics – self-contained though they may well be – are dealt with skillfully and in great, transparent detail, which constantly acknowledges their many interlocking contexts. For example, notes are all of: scoreable entities, MIDI events and audio objects. To read Prischl’s explanations of the many ways in which Logic can represent a note as an isolated component yet one which can be manipulated in those other contexts is more completely to understand how to make Logic do exactly what you want.

The book is liberally illustrated (on almost every page) with clear, well-sized, screenshots, menus, tables, score examples and relevant lists etc. There is plenty of white space, intelligent use of crossheads, consistent typographical convention and summaries, call-out boxes, lists of instructions, outcomes and steps to take etc. The book, for all its origins outside one of the major publishers (which must account for its rather high price), has a most professional feel to it.

In short, if you use, or want to start using, the Score Editor of most versions of Logic (including 9), Johannes Prischl’s “The Logic Notation Guide” is a must. It cannot be recommended too strongly.

Cons: perhaps a little overpriced, not yet completely updated for Logic 9, though still 99% relevant