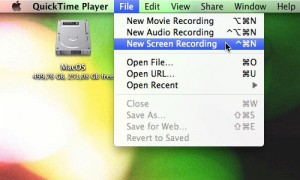 Creating screencasts with free tools was, a short while ago, almost impossible. The necessary optimizations an application needs in order to record the screen properly were either not made or bound to a specific web site. In itself nothing bad there, but tools werenâ€™t very flexible either. Using free software still is something where one needs to keep an eye open (performance-wise). The field, however, became much more diverse recently.Since we have Snow Leopard some things have changed in the market. It seems as if screen recording tools are becoming rather easy to develop and therefore are more attractive to write. The best thing: Apple gives us everything needed with the new(er) OS version. With Snow Leopard QuickTime became more polished. Lost some weight (unfortunately), but also got a couple of new features, such as screen recording. If users are not convinced by an Apple product here are some other tools with similar functions to the built-in QuickTime X:

With QuickTime X Apple gave us a good and free starting position. Recording itself is a snap. Start QuickTime X, go to File New Screen Recording or alternatively press the keyboard shortcut âŒƒâŒ˜N, and a new icon will appear at the top right telling that the screen is being recorded. QuickTime always records the entire screen, which is problematic, especially for beginners.

My recommendation here would be to mind the target audience. Should the screencast go on a web page? Then it might be useful to consider switching the screenâ€™s resolution to a more web-friendly format like 1024×768. HD recordings donâ€™t look very nice once crammed into a 400-pixel-wide YouTube player. As far as I can tell 1024 by 768 has the advantage of still looking pretty good once scaled down to 400 pixels, because the buttons, menus and text arenâ€™t teeny-weeny. To switch the resolution open up System Preferences and then Displays. Switch the resolution to the desired format and the display will adapt. (Secret tip: Iâ€™ve created a special screencasting user account that has this resolution and a much cleaner desktop and file system. How to create a new user account.) Making the screen size the same as the recording size has the big advantage that YouTube viewers will later see exactly the same youâ€™ve seen while recording. Thereâ€™s no â€œwindow falling out of the sideâ€ of the recording.

Lastly some best-practice tips to save from annoyances:

This was a brief introduction into the world of screencasting. Feel free to leave comments with your personal approaches and questions.