iPad sales are phenomenal so it should come as no surprise that everywhere you look there’s another iPad accessory. Apple reported that in the quarter that ended on Christmas Day 2010, it sold 7.3 million iPads. That’s just one quarter. Sales of that magnitude have spawned a fertile and highly competitive accessories industry. I recently dipped one toe into the accessories pond and found that quality and usefulness ran the gamut from good to downright chintzy. Here are a few examples of both:

The Moshi Concerti is one of the nicest of the accessories. It’s a stylish iPad case that is made from a hybrid silicone/microfiber fabric, but it looks and feels like suede. I handed it to my wife as she was about to leave on a two week trip. She found it functional in most respects but with limitations.

The Concerti opens like a book. The right side has a rubber frame that accommodates the iPad with a snug and secure fit. The frame holding the iPad has openings for all cable interfaces and buttons. When open, the left side of the case has two ridges that allow the user to easily prop up the iPad in its horizontal position. The ridges are stiff enough to make the iPad feel secure if it’s sitting on a desk or the seatback table on an airplane, but it’s far less stable if it’s sitting on your lap. 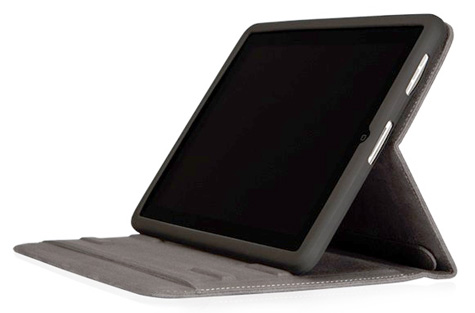 The left side of the case also has an integrated hand pocket which is particularly useful if you turn the iPad to its vertical position. The case cannot be used vertically without being held or supported by something from behind. The Concerti has a detachable lanyard that you can slip over your wrist.The company claims this provides added security but that seemed like an illusion. If a thief is going to snatch your iPad, I doubt he or she will be discouraged by this elegant little lanyard dangling from your wrist.

The Concerti looks good and feel substantial. It provides a degree of shock and scratch protection for your investment. The iPad seems secure in its rubber frame, but would feel far more secure if the case could be closed with a zipper or a tight snap. Still, I wouldn’t hesitate to recommend it. The Concerti comes in what Moshi calls falcon gray and Sahara beige. 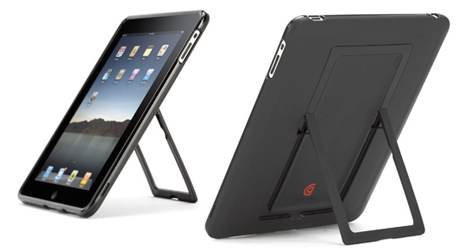 The Griffin Studio Stand is basically a piece of hard plastic with a fold-out stand. The iPad snaps into the stand, which has openings for all cables and buttons. The hard plastic shell will certainly keep the back of your iPad from getting scratched, but that’s the best that can be said for this product. The fold out stand is flimsy. One of its tiny plastic supports snapped off in the first week of use. I’ve used many Griffin products over the years and some are still among my favorites, but this is one I couldÂ  easily do without.

Does the world need yet another charger for the iPad, iPhone, and iPod? Griffen Technology would undoubtedly say “yes.” The PowerDuo, which enables the user to charge his devices either in an electrical outlet or in a car’s 12-volt receptacle, is one of the more recent entries in this already crowded field. They all do essentially the same thing. You plug an adaptor into your iPad or other device and connect the USB end to the PowerBlock, then plug the PowerBlock into a wall outlet. Or you can follow the same steps with the 12 volt charger.

The AC adapter prongs fold into the unit so you can carry it in your pocket without poking yourself. The Power Duo makes for a sleek package and you can find it on the web for less than the $39.00 listed on Griffin’s website.

As many people with toddlers already know, the technology that enables kids to watch movies or play games on a long drive can help preserve the peace for long periods of time. For the record, I’m not endorsing this practice as a model of good parenting. But if you want to keep kids or adults happy from going nuts in the backseat of your car, the Cinema Seat makes it convenient.

The iPad slips into the Cinema Seat’s frame, which has a strap on its back that you secure to the headrest on either the driver’s or passenger’s headrest. A toddler in a carseat can easily watch a movie or TV program on the iPad in the enclosure. There’s also a small mesh pocket on the back of the Cinema Seat for accessories. On my late model Honda Civic, the strap barely fits around the posts on the headrest. A strap an inch or two longer would have made connecting the Cinema Seat a lot more convenient.