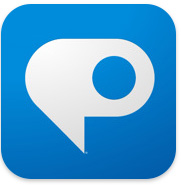 Adobe Photoshop has been the de facto photography/image editing program for many years. However, for many people, Photoshop is either too expensive, too great of a learning curve, too overwhelming, or any combination of the above. Sometimes, all a photo needs to go from good to great is a little tweaking. Adobe heard the cries, and has developed Adobe Photoshop Express, an app that lets users edit and share images quickly and easily. 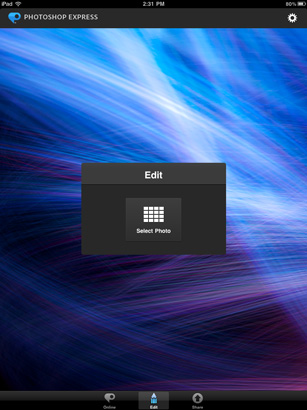 Adobe Photoshop Express is very easy to use. The opening screen invites users to edit a photo, though you could go directly online to your Photoshop Library or choose a photo to share. Most likely you’ll want to edit. After the photo is selected four icons appear at the bottom of the screen. Tap those icons to crop or straighten the photo, change the saturation, exposure, or tint. Add effects and borders. All with a swipe of a finger. No need to fuss with levels and graphs; adjust options by dragging your finger across the screen until you’re pleased with the result. Multiple undos and redos let you experiment with different effects. 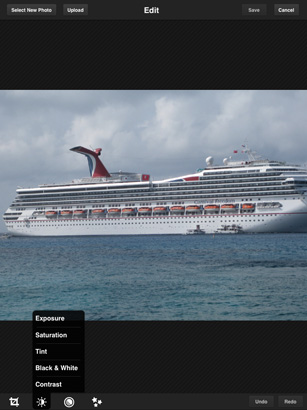 Look at the pictures below. On the left is a picture of a cruise ship taken on a cloudy day. After changing the exposure and saturation of the picture, then adding a vibrant effect, the picture on the right now pops with the bright blue ocean I remember, and the ship looks more like the cruise ship I know and love. Granted it’s not a perfect photo, but I only spent a minute or two playing. Plus, Adobe Photoshop Express uses non-destructive editing, so any change I make is made on a copy of the photo. My original is always intact. 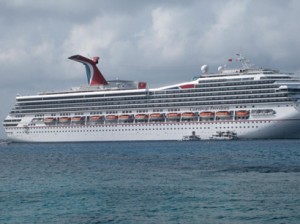 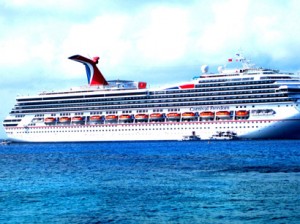 Using Adobe Photoshop Express is rather intuitive, but if you’d like a preview of what it can do, check out the tutorials Adobe made for the iPhone/iPod touch and iPad. These videos were made before the iOS update to 4.0, so some features look a little different, but they get the point across.

Once your photo is edited, you can post it to Facebook or upload it to your free online Adobe Photoshop Express library, where you can organize, edit, and share photos. The online editor has a few additional editing tools not available on the iOS devices, including red-eye and touchup, both of which would be welcome additions to the app version.

Photos can be saved into albums from the iOS devices, but the albums, as far as I can tell, can only be created online. Any photo uploaded from the iOS device would go into the main library. The user could then go to the web site at a later time to place those photos into albums. A minor inconvenience, yet I would like to see the ability to create albums from the devices added to a future update. Not everyone will want to use the web site.

Adobe Photoshop Express won’t replace Photoshop if you’re a hard-core photographer, but for the average user like me, it’s made editing and sharing my precious photos fun and easy.