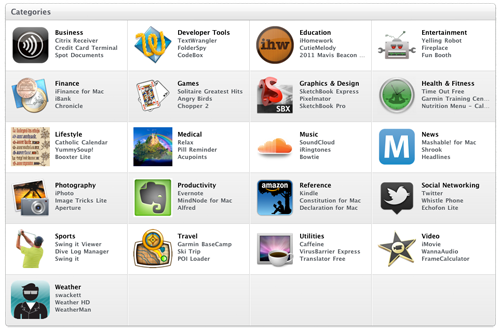 Anyway, a few years ago, even before the actual launch of the iTunes App Store, I was spouting on the MyMac Podcast that there should be something similar for Macintosh application. And here were are, January 2011, and we finally have it! The App Store!

(And, hey, I know everyone is calling it the Mac App Store, but it’s official name seems to be App Store. I’m just saying.)

So far, it appears that the App Store is off to a roaring start. Already a few million Macintosh Apps have been downloaded, and the thing just launched! Imagine when we get some REALLY great applications on there! Oh, sure, there are some already, but not nearly enough for the App Store to replace my ordering from Amazon or directly from a developer. (Hello, Adobe, Microsoft, Rogue Amoeba, and a bunch of others I can’t think of right now.) That’s not to degrade the excellent software and companies who are pioneering the App Store, but I want it all there.

There are some major concerns by developers about getting on the App Store. For one, it’s a buy once, install on all your computers. While I would love to only buy one copy of a piece of software, and install it on all my machines, many license agreements forbid it. (Try running Adobe Photoshop with the same serial number on more than one computer on the same network to see what I mean.)*

Also, it’s tied to your Apple ID, meaning you can go buy an iTunes gift card, and use it on the App Store to buy all your Mac applications! YEAH, BABY!

There also, at least initially, seems to be a problem with large file sizes. For the first half-day, Lego Harry Potter Years 1-4 was available to buy and download from the App Store, but was pulled shortly thereafter. Was it because it came in at just under seven gigabytes? According to Edwin at Feral Interactive, they suspected originally that it was due to the file size. (On a side note, Feral is going so far as to tell people who purchased the game, but was unable to download it, to email them your receipt and they would allow you to download it from their site. Nice!)

My initial impression of the App Store? It’s great. Just what I was hoping for when I made my prediction a few years ago. Better, even! But as great as it is, for it to really be the end all of buying Macintosh applications, Apple needs to relax on some of the types of applications they will allow on it, much like they did with the iTunes App Store.

One last thing, and while I am a huge advocate to developers (especially the smaller ones) they REALLY need to figure out pricing. GraphicsConverter is one of my favorite applications, and I have used it for years. But $38.99 on the App Store? Really? You are just killing a HUGE segment of potential buyers from buying your program! A far better price would be $14.99, a price point which would sell ten times better than the almost $40 it costs right now.

One thought on “The (Mac) App Store
Finally!”