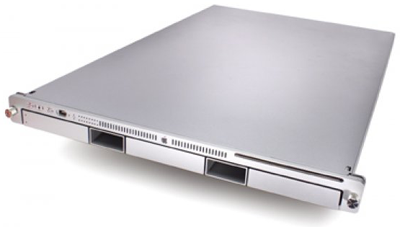 While listening to the MyMac.com podcast #320, a few points came to mindâ€¦

The recent news that Apple has killed the Xserve product line came as no huge surprise to me. Apple has always had a love-hate relationship with the enterprise. I can remember back in the late 80s to early 90s, Apple maintained large offices in strategic cities around the US, and probably around the world, with swarms of sales and technical consultants. They often held closed-door NDA (non-disclosure agreement) meetings to let their enterprise customers know what was coming down the pike so they could start making budget plans (I remember these meetings well, from my former life as a corporate drone). Well, by the mid-90s that was all gone, and the formerly tight relationship Apple had with their enterprise customers went bye-bye.

When I read about the introduction of the Xserve line, I was very impressed, as was the computing community. This was strong, solid, well-designed hardware that was often used by Linux and Unix users who replaced MacOS X Server with their own preferred *nix brand of operating system. This was just about the time that the needs of videographers, still photographers, and other content creators, for bigger and bigger storage solutions, were growing by leaps and bounds. There was a definite need for relatively inexpensive, easy to maintain servers, storage area networks, and similar devices, which was fulfilled by the Xserve line.

Then, a couple of years ago, the Fiber-based stuff and their RAID lines went away. Last week, Apple announced the end of the road for Xserve, and at the same time, probably spelled the end of formal enterprise support completely at Apple, who seems so enamored with their neat little handheld devices these days. Maybe it makes some sense when you take a 10,000 foot view of the situation.

While the Xserve line was probably profitable enough, the actual dollar contribution to Appleâ€™s bottom line was so small that it may have required asterisks in the quarterly financial reports to note income from that line of products.

In my view, what this seems to mean is that Apple really could care less about the traditional desktop graphics professional market. I can almost hear Steve Jobs pontificating on how â€œprint is soooo 90s.â€ Apple’s answer to the end of the Xserve was to tell their customers to buy lots of Mac Pros and MacOS X Server-running Mac minis. Rather impractical for a big data center in terms of sheer space for the Mac Pros and just a joke for the Mac minis (which, mind you, do make excellent fileservers and mailservers for a small office, but not for folks with multi-terabyte appetites, such as those in any media trade). The rationale is pretty simple: the market for print-related graphics design is rapidly-dwindling, and Apple can no longer justify supporting a hardware platform that has so few significant sales. Magazines, big and small, are falling by the wayside almost on a daily basis, not to mention the continual suffering of the newspaper industry (that much of their suffering was brought on by themselves is fodder for a future rant). Marketing experts have determined how much cheaper it is to reach their targeted audiences online, and not affix pigments suspended in volatile organic chemicals to highly-processed dead trees and send those via the archaic global postal system. The USPS is asking for another postage increase, as they are losing money by the bucketfuls, thanks to email and cheaper package delivery services (FedEx, UPS, etc.).

Today, most users of Apple products are focused on the smaller “i” devices, lower quality video intended for distribution via YouTube, and certainly not print or high quality audio/video media. Listen to someone of my advanced years (in my 50s) talk about audiophile and videophile quality. The current generation of GenXâ€™ers, GenYâ€™ers, etc., could care less about audiophile/videophile quality. The huge sales of all of these (mostly) crappy-sounding iPod audio accessories are a clear indicator. Users want portability, and of course want the ability to view or listen to their content whenever and wherever, on whatever device they happen to be holding at that immediate point in time. Not a bad idea in principle, but still lacking in practiceâ€¦

College level graphic design programs are geared nearly 100% toward online technologies. Professors are actually telling their students not to dirty their hands with that nasty old print technology, lest they be considered to be nasty and old themselves. One of my friends found this out when she tried to find someone at a local college outside of Cleveland, to help her with some page layout chores for a newsletter that she and I collaborated on. The moment the students found out it was for print work, they turned her down flatâ€”remember, these are starving college students! Imagine! They would rather starve than work on print projects! Ah, the idealism of youth. I really want to be there to see when stark reality crushes their dreams, but maybe thatâ€™s just the cynic in me. But I digressâ€¦

Back in the dark days when I toiled away in the corporate world, on several occasions, I had to train graphic designers from top advertising and design agencies how to design for print! So many of them just thought of print as a giant laser or inkjet printer and had no concept of print as a craft and a trade. They didnâ€™t understand how to get print to â€œbleedâ€ to the edge of a page, the concept of process vs. spot color, pagination, binding, and, and, andâ€¦ They just had no idea. I guess it was better that I trained them how to do it than have to fix their files before a printer accepted the job–on deadline, of course.

Visit your friendly neighborhood bookstore these days and wander over to the computer books section. Iâ€™ll waitâ€¦ First, youâ€™ll note that these sections are now easily half the size they were a year or two ago (donâ€™t get me started on Barnes & Nobleâ€™s experiment with eliminating CD sales from stores entirelyâ€”something being test marketed here in S. Florida at one area retail store). Then look in the graphics software section. Not too long ago, you could count on seeing at least two full shelves of books on print-oriented software titles like Quark Xpress, InDesign, PageMaker, FrameMaker, Illustrator, CorelDraw, and others. Today, those same shelves are filled with books on Photoshop (sometimes two or three shelves just for Photoshop books), Dreamweaver, and lots of other online design-related books. On my last visit, I counted two books specifically written for InDesign, and another three or four titles covering the Adobe Creative Suite.

So, after that rant, here are a few questions (and maybe some answers):

A. Probably nothing directly from Apple, at least not in the immediate future. The best that traditional Xserve customers can hope for is that Apple will license their server technology to select makers of â€œblade serversâ€ and permit their server operating system to run on virtual machines, just the way the big boys do with various iterations and configurations of Windows Server. The odds are not good. Apple loves to control things to death, and theyâ€™ve already licensed their OS once before with mixed results.

Q. Whoâ€™s going to be designing the next generation of print media?

A. Good question. Iâ€™m sure there are still some great design schools out there that take a more balanced approach to the various kinds of media on which content can be distributed–print being just one of those. If not, itâ€™s going to be old farts like me, as well as some of my good (and sometimes graying) friends who were raised in the print world (hi Barrie, Wendy, Jason, Heidi, Jack, Julie, etc.!).

One thought on “The Death of the Xserve, and the Ailing Traditional Media”