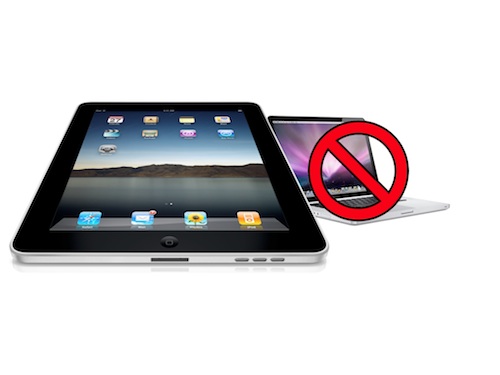 I recently had the good fortune to attend this yearâ€™s annual STANYS (Science Teachers Association of New York State) Conference in Rochester, NY. Think of it as a Macworld Conference, except for science teachers. Itâ€™s always a great way to network with colleagues you usually only speak to online and to get new ideas to spark student interest in the sciences.

In the past, many teachers have brought a laptop of some sort with them to access e-mail, take notes during sessions and access the Internet. For the past several years, the number of people bringing laptops with them to the conference has grown noticeably larger â€” until this year.

I thought Iâ€™d look cutting-edge bringing my iPad with me into my seminars. Boy, was I mistaken, because instead of standing out, I was one of many who had the same idea. As a writer for MyMac.com, I usually take notice of what types of gear people people around me are using. In nearly every seminar I attended over a four day period, several people took out their iPads as if it were a normal part of their routine. I purposefully looked for laptops, and aside from presenters, I saw only one laptop during the entire four day conference.

To me, this was striking. Perhaps it was just the dynamics of the group of one thousand or so science teachers in attendance at the conference, but I perceived it as a real turning point in how people are utilizing laptops. To be honest, I brought my MacBook Pro with me to the conference and it stayed in my bag for the entire trip.

As a first iteration of an Apple product, Iâ€™d think many people would shy away from the iPad, but thatâ€™s definitely not the case. For a short three to five day trip, an iPad suits my needs perfectly. I can check my e-mail from both home and work, and since most hotels provide WiFi access, I can also look at the websites presenters talk about on the fly. During my down time, I can be entertained with movies, games, podcasts and music.

The iPad is by no means at the point where heavy writing and content creation is an easy feat, but for these short trips it works out perfectly. And based upon what I saw at the STANYS Conference, itâ€™s doing the same thing for many others at the expense of laptops. The iPad is more portable and less likely to break than a laptop as well, making carrying one around a convention center all day long less cumbersome. Anyone who has carried a laptop bag around all day can attest to the fatigued shoulders they cause.

Donâ€™t get me wrong, because I feel there is a definite need for my MacBook Pro and other laptops. In fact, Iâ€™d love one of the new eleven-inch MacBook Airs. They are amazing pieces of technology. But I also think that for future trips and conferences, Iâ€™m going to save some space when packing and just bring my iPad. Itâ€™s proving to meet the needs of travelers and professionals in a big way, and thatâ€™s something of which the rest of us should take notice.