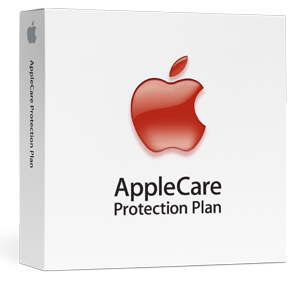 One of the joys of buying consumer electronics is having to decide whether or not to purchase a warranty for your shiny new toy. Most warranties are fairly limited, expensive, and generally worth thinking about carefully before deciding to purchase. But not so with AppleCare. AppleCare is a no brainer. If you’re considering buying an Apple product, and you’re not planning on getting AppleCare, then Lucy, you have some ‘splainin to do.

Apple’s web site shows AppleCare options for Mac and Apple display, iPod and Apple TV, iPhone, and iPad. What might not be obvious is that if you purchase AppleCare for your Mac, it will also cover things other than the Mac and an external Apple display, such as a Time Capsule or Airport Extreme. I’m not sure how Apple handles it if there’s any question about the other device being purchased at a different date than the Mac, but I have firsthand experience that they will honor it.

I was one of the miserable people who purchased one of the first generation 1GB Time Capsules. While great in concept, it was less so in execution. I experienced constant network drop outs under heavy network traffic, such as two computers backing up to the Time Capsule over WiFi at the same time, and other situations like having to reset the device and reconfigure it to get networking back online again. It also had short WiFi range, much shorter than any Linksys or Netgear router that I had used previously. It was the only Apple device I’ve ever owned that could make me furious on a routine basis.

After one episode of network activity loss requiring a full reset to restore, I took it in to the Genius Bar at the Apple store. My hope was that they could find a way to test the wireless under load, but unfortunately there was really no pratical way for them to do so. So they sent me home, very unhappy and disappointed in my AppleCare experience. Then, months later, the power supply in the Time Capsule died. I took it back to the Genius Bar, they attempted to power it up, and then they gave me a new 2nd generation Time Capsule with dual antennas, better range, and no networking drop outs or nightmares. It’s just worked, and flawlessly so, ever since. Months of frustration were worth it in the end â€” this version of the Time Capsule is so superior to the original. It’s what the Time Capsule should have been initially, and thanks to Apple Care, it didn’t cost me another $300.00 for a proper networking experience.

My second trip to the Genius Bar with thoughts of Apple Care dancing in my head came after I carelessly dropped my iPhone 3GS on the concrete just outside of work. I had my work badge on a lanyard around my neck, and my headphones snaked through the lanyard to the iPhone in my pocket. I reached into my pocket to pull out the iPhone, the headphone cables snagged on the badge, and the iPhone flew out of my hand and popped loose from the headphones and hit the ground. Fortunately, everything seemed to work fine, and there was only a minor scratch on one of the bottom corners. But the impact introduced a bunch of dust under the screen. I had already been living with a couple minor spots of dust, but this was really noticeable, and very, VERY annoying. The girl at the genius bar took one look at it, and replaced the screen on the spot courtesy of Apple, thanks to my AppleCare.

As if that weren’t enough wonder from the Genius Bar and AppleCare, not a month after the iPhone incident, my Macbook Pro suddenly became unable to power on. Pressing the power button would generate a whir from the fans, a noise that sounded like the hard drive trying to start up, and then power would immediately die. I swapped in a different battery to make sure it wasn’t causing some problem that kept the Mac from powering up whether plugged in or not, and then scheduled an appointment for the Genius Bar again. This time, the same girl who replaced my iPhone screen examined the computer, remarked what great condition it was in (it’s an early 2008 Macbook Pro), and sent it in for system board replacement. A few days later, my Mac was back and I was in business. The repair would have cost $800 if not for AppleCare. It paid for itself twice over with that repair.

So far AppleCare has paid for itself several times over. The replacement Time Capsule and the Macbook Pro repair both came from the same $350 AppleCare coverage purchased for the MacBook Pro. The system board replacement was worth $800, and the Time Capsule I have currently costs $299. That’s $1099 worth of product that I would have had to pay for myself, for the $350 cost of an AppleCare Protection Plan. And the customer service that goes along with that is, generally speaking, top notch. There are the occasional bad experiences for people, but they are the exception rather than the norm. Thinking back to support that I’ve used in the past for Dell and Gateway indicate to me that PC buyers might not typically be so fortunate.

3 thoughts on “AppleCares, and so should you!”