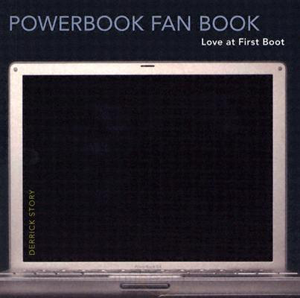 Published in 2004, the oddly-titled â€˜PowerBook Fan Bookâ€™ isnâ€™t about the fans inside PowerBooks, or about the people who rave about PowerBooks in the way that others are keen on Manchester United. The â€˜PowerBook Fan Bookâ€™ isÂ actually an alternative to the user guide that came with Appleâ€™s PowerBook series of computers, and tells the reader about these machines, what they need to work well, and how to get the most from them.

Of course, in some ways this is ancient history. Apple sold their last PowerBook in 2006, and since then the high-end of their portable Mac line has been filled with the MacBook Pro series of computers. But a review of the â€˜PowerBook Fan Bookâ€™Â isnâ€™t completely pointless. Some of whatâ€™s included in this book holds as true for the MacBook Pro series as it did for the PowerBooks, but really, the value of this book nowadays is that it’s simply a neat collectable.

The introduction accurately describes the â€œApple lustâ€ many of us feel when we unpack our new computers. Whether that’s because Apple’s marketing department is amazingly effective, or the natural reaction of discerning users to top-quality quality design is difficult to say, but whatever it is, author Derrick Story describes it rather well.

Chapter two is essentially about keeping a PowerBook nice and shiny, and so covers things like cases, keyboard protectors and screen cleaners. After that the second chapter describes the various system settings needed to get the most from a PowerBook in terms of battery life, network connectivity and so on. Chapter 3 is mostly focused on personal information management from Â the perspective of mobile professionals; iCal, Address Book and Bluetooth cellphones feature strongly here.

The coverage of iPhoto and iMove inÂ Chapter 4 is pretty lightweight, but does make the point that portable Macs are natural companions for anyone recording or creating digital media on the go. The fifth and final chapter is very good fun, reviewing all the bolt-on goodies available to the PowerBook user, from media readers through to laptop coolers. Many of these products are useful today, and work just as well with MacBook Pros as they did with PowerBooks.

For all the content though, thereâ€™s no escaping the fact this book was written more than six years ago. So this really is a book to be purchased and enjoyed for sentimental rather than practical reasons.Â The â€˜PowerBook Fan Bookâ€™Â is beautifully put together and illustrated with colour throughout. Itâ€™s the same size and shape as the â€˜iPod Fan Bookâ€™, and taken together the two books make a great snapshot of Apple history circa 2005.