Are you the type of person who loves to share travel photos and details with friends and family? If so, Trip Journal may be for youâ€”with a few caveats.

Trip Journal is an app that lets you document and share your travel adventures with family and friends through social networking sites including Facebook, Twitter, Flickr, Google Earth, and Picasa. Users can upload photos, notes, and routes in real time, or when the trip is completed. 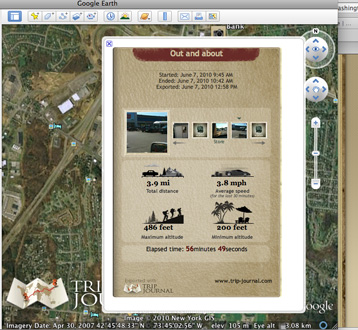 Trip Journal can be a bit confusing at first, so I highly recommend playing with it before you use it on a real trip. For an iPhone app there’s a lot to it. Click on the buttons and see where it brings you. Some features you’ll need to read up on in the app’s Help file, located on Trip Journal’s home screen.

Each trip contains waypoints, which hold the notes, photos, and GPS locations of your trip. Think of each waypoint as a box that stores all the data you recorded for that one stop. For example, if you were driving from New York City to Washington, DC, your first waypoint could be leaving your home, the next waypoint might be stopping along the Jersey Shore, the third arriving in Washington, DC, followed by waypoints of all the sights you visit in the city. 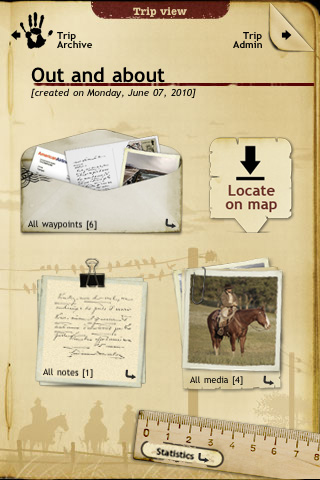 As you make your journey, your route is traced by GPS, and tracked on a map by a red line within Trip Journal.When you look at the map, click on the paper clip in the upper right corner. A drop down will give you information on where you were, the date of the visit, and the altitude, longitude, and latitude of the location. For additional statistics of the trip, go back to the home page of the trip and click the Statistics icon, located on the ruler at the bottom of the screen. 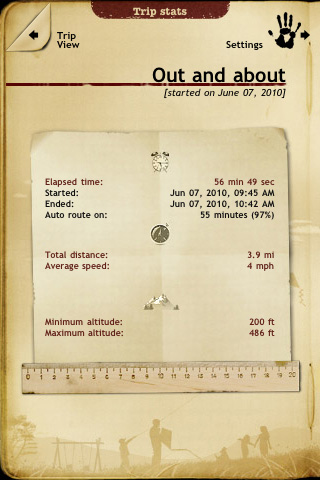 I discovered this app in late March, 2010, while browsing the iTunes Store. It looked interesting, so I downloaded it, knowing I had an upcoming trip in April. I couldn’t take advantage of all the features because I would be out of the country, and did not want to incur international rates, but I was able to get a good idea of how the app worked. Exporting photos to Flickr worked seamlessly, as did uploading my route to Facebook. I was using version 4 of Trip Journal.

In May I upgraded to version 5. And the troubles began.

On Sunday, June 6, I went to New York City for the day. This time I could really test Trip Journal. I took pictures at each waypoint. The pictures saved to my phone, but did not attach themselves to my trip. What the heck is going on? I kept thinking to myself. All day long I took pictures, just like I did on my trip in April. And all day long the pictures did not appear in my trip. The notes aspect worked, as did creating waypoints and route tracking. But for me, the best part of a trip are the photos.

Turns out I wasn’t alone with my photo problem. The very day I went to New York City, Trip Journal was updated to version 5.1. One of the bug fixes included the ability to add photos to waypoints. That made me feel better!

The other issue I found is not with Trip Journal itself, but with the lack of multi tasking with iPhone OS3. In order to track a route, the app must be open at all times. Currently, that would be quite difficult, if not impossible. Now that Apple has released the iPhone OS4 update which includes multitasking, Trip Journal developers are working to build a new version of Trip Journal that will be able to track routes as intended.

I created a few localized trips, just to test the Facebook and Flickr exporting features with version 5.1. It was very hit and miss, until the version 5.2 update. Now it works as describedâ€”except for the video exporting. Listed on the Trip Journal web site, under the June 17, 2010 release notes is the following: “And to make Trip Journal even better, weâ€™ve added an option to upload videos from Trip Journal to Facebook and Flickr.” Where is that option? I searched all over the app and couldn’t find it. The User Guide mentions the ability to export a video directly to YouTube. Once again, where is that option?

Trip Journal was awarded the #1 Travel Application by Google, and received a $100,000 prize from Google for innovative concept and design in December, 2009. It’s a perfect way to record traveling, biking, hiking, or even walking/running routes. For a small amount of money, and a little bit of time to learn the app, Trip Journal is worth a download. Once the bugs are ironed out, Trip Journal could be a killer app.