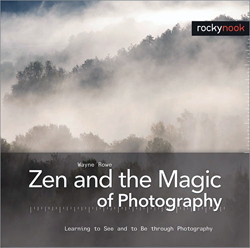 What is the difference between a snapshot and a great photo? What creates that electricity, that energy, that je ne sais quoi, in which all serious photographers are trying to capture with their images?

In this diminutive volume, Wayne Rowe has defined for us what we must all strive for when making great images. That is the Zen of the moment. The here and now. Created by what is termed Sartori, or sudden enlightenment, Zen is the capturing of that most important element in the image-making process. Allowing the image to define that point in time as the quintessential moment. The moment of Zen.

To point up the exact opposite of the message of this book, take note around you during your daily rounds and see the people who are talking on the phone or texting someone with little regard as to where they are, who is there with them, or what is going on around them. We witness this phenomenon every day.

As far as timing is concerned, this little book, Zen and the Magic of Photography, is more important than ever. It’s almost as if author Wayne Rowe has seized the moment at just the right time in history. It can encourage us to be made aware that we can lose ourselves in the past and future, while giving up the present.

The relationship between still photography and film is, according to our author, inextricably linked. As author Rowe points out in examples of several iconic movies, scenes played by great method actors Marlon Brando in "On the Waterfront", and James Dean in "Rebel Without a Cause", are graphic examples of an artist being in the here and now (Zen). These great actors become part of the scene as though they were actually living the experience in real life, therefore the scene becomes greater than that which was written and directed. Our author has included several scene shots along with explanations of why the scenes work as well as they do. For you film buffs out there, you will be enchanted. For photographers these scenes will create a checklist for you to put up against your own work for comparison and study.

The idea about filming great scenes goes for iconic images created by still photographers who put themselves wholly into the scene they are photographing, looking for enlightenment (Satori). Taking note of small, sometimes mundane, details in the scene along with the larger picture can create moments of Satori, which in turn, creates an image that is greater than the sum of its parts. Our author has included several iconic images with explanations and examples of how and why these images achieve the status they deserve.

The last several pages of the book are dedicated to the author’s own images in full page and half page presentations. He invites you to find the Satori and Zen in his work. Wayne Rowe is definitely an excellent photographer as his images attest. His love of photography and recognition of the Zen in this art form are what have driven him to share with us his discovery and understanding of this phenomenon he calls the Zen and the Magic of Photography.

There are many lessons to be learned from this book. The main message is to be yourself, be in the moment, and be true to what you see and especially feel about the images you take. Good advice from a great photographer is something that should never be taken lightly. Will this book help you create better images? We believe it will. Try it and see. What have you to lose?