My First Concert with an iPhone
by Elisa Pacelli

On March 11, 2010, Billy Joel and Elton John’s Face2Face tour finally landed in my area after two health-related postponements. We had seen this tour in 2003, but this time it was just a little different:

This year I had an iPhone.

I’ve been to many, many concerts. At some I used a plain old vanilla cell phone to call my kids who couldn’t make it. I’d hold the phone up so they could hear some of the music, but they usually hung up quickly because the sound was so distorted they couldn’t hear very well. Before cell phones, you justâ€”gasp!â€”told someone about the concert the next day.

We got to our seats about 45 minutes before the start of the show. I took pictures of the arena filling up, and immediately uploaded them to Facebook. Instant feedback arrived from friends who knew we would be at the show. During the performance I took more pictures, which appeared on Facebook a minute or two later. I used the video function on the camera to record a few minutes of Elton John performing “Funeral For A Friend/Love Lies Bleeding,” and Billy Joel singing “Scenes From An Italian Restaurant.” When a song was played that I didn’t care for, I checked my mail, Twitter feed and Facebook. And, being the total geek I am, after 10PM EST I looked up who was sent home on American Idol.

The next day, after syncing my phone to my computer, I sent the videos to one of my sons through Dropbox. He’ll be able to relive the concert again and again.

A note about photo and video quality on the iPhone: the clarity of the pictures and/or video depends on the surrounding conditions, as it would with any camera. The first photo looks pretty good; it was brightly lit in the arena and was taken from our second level seats before the show started . 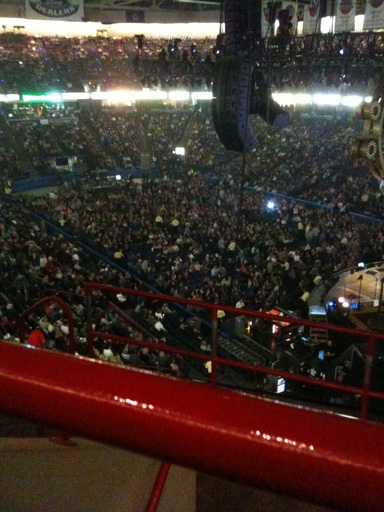 In the second photo, it’s more difficult to see the performers due to the multiple lights and my distance from the stage. I know Elton John is playing piano under the far right white light only because I was there! 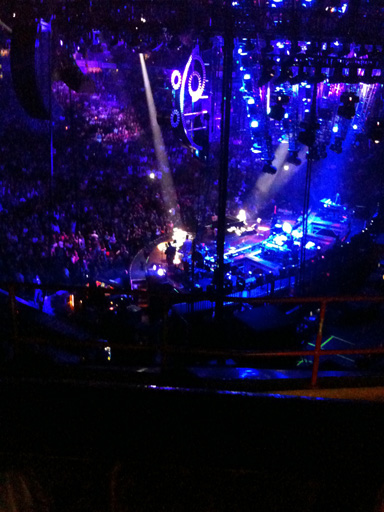 The videos suffered from the same problems as the photos: lighting and distance from the stage. For my personal use, the videos are great, and are a nice memory of the show.

I love my iPhone. I’ve owned it for less than a year, and I wonder how I ever lived without it?

By the way, the concert was fabulous! Billy Joel and Elton John sound just as good now as they did in the 1970’s.