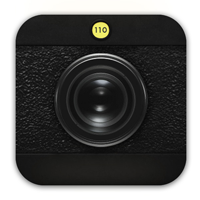 “DIGITAL PHOTOGRAPHY NEVER LOOKED SO ANALOG!”
As a long-time photographer, I have found that, in these days of digital cameras, computers and pixel pushing in Photoshop, I often reminisce about the good old days of cheap film, smelly darkroom chemicals and quirky cameras! Back then, if I took pictures with a Polaroid, a Kodak Instamatic 126 or a cheap-o plastic “toy” camera, like a Diana or the Russian Holga, I would obsess about their unpredictable results: soft focus around the edges caused by cheap plastic optics or even light-leaks which would clearly mar the final images with unwanted white streaks.

Then there were different kinds of film to try. Some better than others. Some grainier than others. A few of the color films suffered color shifts one way or another. Others were more contrasty. Many of the photos were not properly processed and printed, which resulted in colors fading. I have boxes of old photos taken in the 60s and 70s which have shifted or faded so much, never mind they were taken with crappy cameras, that the subjects photographed are practically unrecognizable. 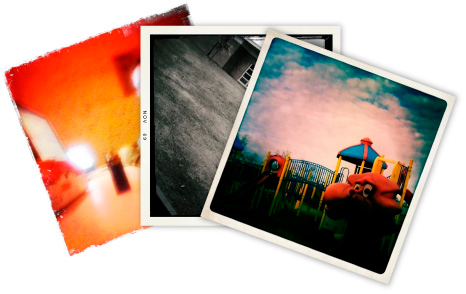 And yet, there is something magical about these – now gems – of another era. I love images that sport a retro look. In fact, there are thousands of photo enthusiasts who still pursue this kind of photography with old cameras. A great example is the Diana plastic camera. All you have to do is search on Flickr to find a vibrant community of Diana fans. However, as I talk about in this review, that retro look can be faithfully reproduced digitally either with camera-resident software, or when processing with a photo editor, like Adobe Photoshop. 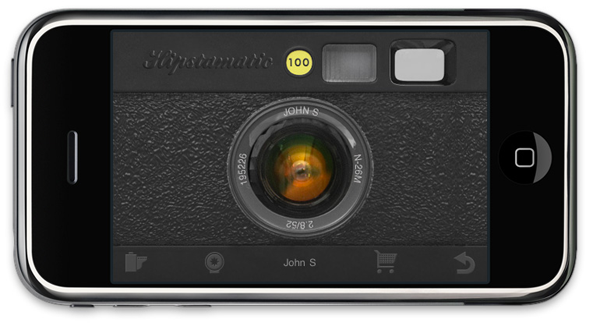 Now, with the iPhone camera we can recreate the experience of using an old analog camera as faithfully as possible for that highly sought-after retro look. There are several apps that do this, but the one that I have been using heavily and love for this purpose is the $1.99 app called Hipstamatic by Synthetic Infatuation LLC. The developer uses a clever way to designate the version of the software. The first version was the Hipstamatic 100 (as in camera Model 100). This was followed by the 110, and now, the current version is the Hipstamatic 150 which includes quite a few improvements, new features and new capabilities. This is turning out to be one of my very favorite photography apps on my iPhone 3GS.

Basically, Hipstamatic allows you to mix-and-match combinations of retro lenses, films, flash and photo borders/edges. But the truly unique feature of this app is the user experience. Hipstamatic’s user interface makes it look like you are actually handling a real-life, limited edition, $8.25 Hipstamatic 100 camera that was developed by Bruce and Winston Dorbowski of Merrill, Wisconsin. Only 157 were produced back in 1982. Production stopped abruptly due to the unfortunate demise of the young brothers caused by a car accident. The Hipstamatic 100 camera was born out of a love of the Kodak Instamatic and a desire to make it something even children could afford on a small allowance. Ultimately, the goal was to produce a camera that mimicked a plastic Russian camera that had disappeared from the scene. Bruce Dorbowski once said, "It doesn’t matter if the photos aren’t prefect. As long as people are capturing memories, I will be happy." If you’d like to read more about the interesting history of this camera, visit www.hipstamatic.com.

When you pick up your iPhone and run Hipstamatic, what comes up on the screen is a replica of the original camera. You can interchange lenses, each with their own unique “look and feel.” As of this writing there are six lenses to choose from. You can switch the lens by simply swiping across the front of the camera to view your choices and make your selection. 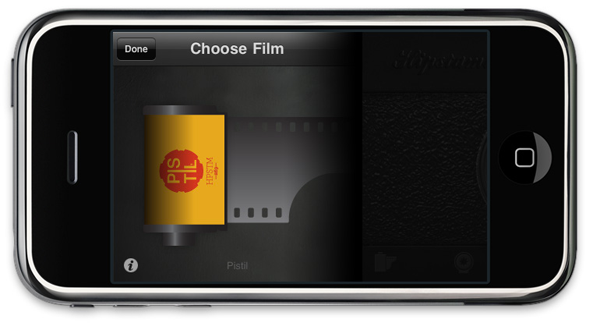 From the “front” of the camera, you can also choose which type of film you want to shoot with. Right now there are eight film types. These films do not represent actual films brands or types that exist now or have existed, but each have their own characteristics which are described on screen and on the developer’s website.

From the front, you can also choose from six type of flash units and color gels that are virtually connected to the camera’s hot shoe. The use of the flash is optional, and activated via a switch on the “back” of the camera.

When you purchase the app, it comes with a default set of 3 lenses, 3 films, and 2 flash units that you can choose any combination of. If you’re like me and can’t get enough of this, you can mod out your camera at the “HipstaMart.” Through the magic of in-app purchasing, you can browse the aisles of the HipstaMart to find new lenses, flashes, gel packs, and films for your Hipstamatic. You purchase $.99 “HipstaPaks” which are bundles of lenses, flashes or films. As of this writing, there are four HipstaPaks available, and you must purchase these via the Hipstamatic app.

Back to the app! When ready to shoot, the camera “flips around” to show you the back. There, you see a shutter release, a viewfinder, and the flash on/off switch. The viewfinder is a small square because the resulting “print” is a square image with border and all, just like the ones we used to get back from the drug store in the olden days. But the viewfinder is very small – like a postage stamp – adding to the whole realistic retro feel of this camera app. 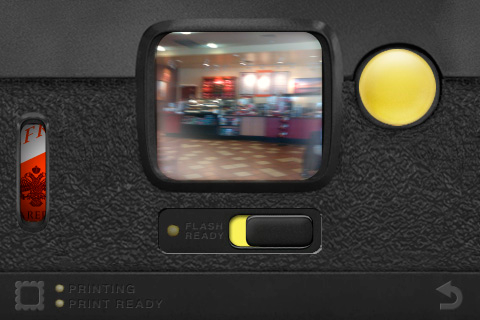 When activating the optional flash with an on/off slider switch, a short flash whine sound is heard, indicating a charging flash. The flash function provides random effects to the photo, including hot-spots and overexposed flash effects. Nice, and oh-so retro!

After taking the shot by pressing on the large yellow shutter release button, a series of three red lights activate sequentially to indicate the processing of the image, then a yellow light followed by a green light means that you can view the “print” that the camera processed (think of Polaroid). 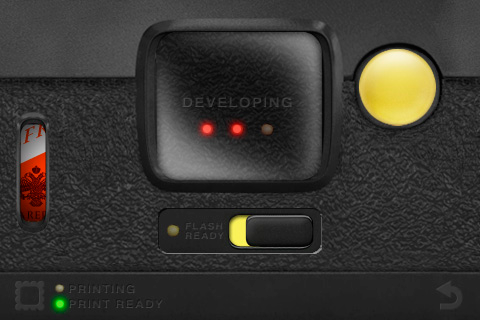 All the images are automatically stored in your Camera Roll on your iPhone, but the app also keeps them within it a “recent prints” library, giving you a thumbnail catalog of all images you have taken with your Hipstamatic camera, until you clear out the library. But the full-size images produced by the camera are kept in your Camera Roll along with your other photos. 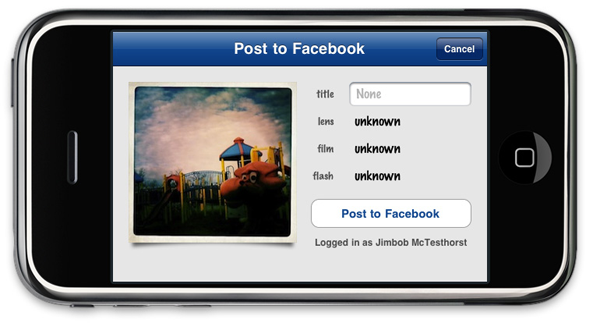 Hipstamatic offers you ample opportunities to share your retro images via the interwebs, and there is great community support as well. From within the camera’s thumbnail library, you can share photos directly via Facebook, Flickr or email. Also from within the app’s library, you can access information regarding very active online monthly photo contests available for photos taken with Hipstamatic. For example, as I write this review, there is a contest going on through Mar. 19, 2010. The theme of this contest is “Overindulgence.” (I think I’ll take a self portrait of me overindulging in iPhone camera apps!) You can view the entries directly on the Hipstamatic website. An upcoming contest called “Faceless Portraits” will commence on March 19. If you want to enter your Hipstamatic photos into the contests, you can do this directly from within the app! The developers of Hipstamatic, as well as other camera app developers, are to be commended for this kind of educational and competition support they provide to their users.

As for the app’s settings, there are a few available via System Settings. One setting allows you to save your images in a higher resolution, but of course it take a bit more time to process – about 10 seconds versus 5 seconds. The high-resolution version is 1536 x 1536 pixels for the 3GS and 1200 x 1200 pixels for the first gen and 3G. The low-resolution version is 525 x 525 pixels. By the way, the standard iPhone 3GS image resolution is 2048 x 1536 pixels.

Another setting that you can enable is the ability to randomize the combinations of film, lens and flash types by shaking the iPhone. You know, there are so many combinations of film, lens, flash, and border types that my head spins just thinking about them all! Fortunately, you can view many of the possibilities by going to the website. Also – and this is very helpful – while perusing your thumbnail library of images from within the Hipstamatic app, if you come across a “look” that you really like, there is a button you tap to set your camera to match those particular settings (film, lens, etc). I would like to see a future version of Hipstamatic offer this functionality through a number of presets that you can store and select from.

The website, www.hipstamaticapp.com, is very nicely designed with plenty of background and historical information for the Hipastamatic community. They provide news and support via email, Twitter and Facebook. They also provide a downloadable 36-page Owner’s Manual in PDF format. Additionally, the developer has posted a vide up on Vimeo at www.vimeo.com/8092535

Finally, since Hipstamatic is strictly a camera app, and does not work with existing photo library images, it is not compatible with the current camera-less iPod Touch. However, on the support page at the developer website, there is an indication that this is in the works. I would like to see this feature included sooner than later. As much fun as it is to shoot with this virtual analog camera, I would really like the capability of processing existing images with the retro effects that Hipstamatic offers.

In conclusion, of all the retro camera emulation apps that are available for the iPhone, this one is my favorite one, hands-down! It’s a smart app, it’s a lot of fun, and it looks good, too. If you check my blog at www.SandroCuccia.com, you will see many examples of images I’ve taken with Hipstamatic for my “Project365,” an ambitious undertaking where I take a picture a day for a whole year in an effort to tune my “Photographer’s Eye.” It’s kind of ironic, because I teach people how to take nice, sharp, award-winning photos, yet when using these retro analog cameras, we revel in the “bad photography” look that they produce. Composition may be perfect, but the irregular effects (or, more accurately, image defects) are quite endearing!

I rate Hipstamatic (version 150) a nine out of ten stars for a solid, fun, and flawless app with an appealing user interface and with wonderful resulting images to add to my library. The one big item for the wish list is the capability to work on existing Photo Library images (and the eventual compatibility with the iPod ).