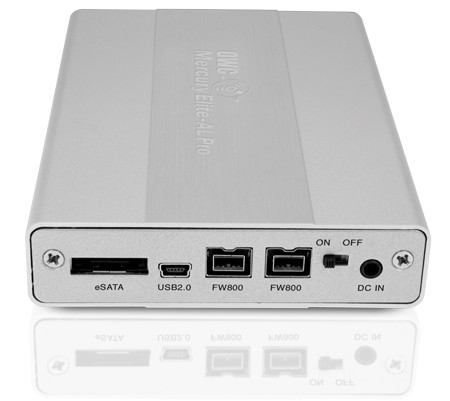 When we last tuned in, Other World Computing had recently introduced a portable SSDÂ (solid state drive) hard drive. Our review concluded it was screamingly fast, but pricey, and perhaps not the idealÂ solution for portable use.

The Weeks Division of MyMac Labs has been using one extensively for over a month. InÂ short, we love it.

The Elite-AL case is tough, as it’s made of a nicely brushed aluminum. The metal isÂ thick enough so it won’t flex or squeeze, as some cheap metal cases will. It’sÂ fairly small, but not tiny.

The front has a grille for cooling that’s backlit with a very cool-looking purple light.Â In use, the drive was dead silent.

The name of the game for this drive is Speed (with a capital S), so it sports twoÂ FireWire 800 ports for easy daisy-chaining, and an eSATA port. A USB 2 port isÂ included, even though USB 2 is not as fast as FireWire 800 or eSATA. The drive mechanism itself is a Seagate Momentus 7200.4

We don’t have an eSATA card on the Lab’s Mac Pro, so all our testing was done usingÂ FireWire 800.

The drive came pre-formatted for Intel Macs, and that’s a nice touch. Most resellersÂ target the PC market, and Mac users often have to reformat/repartition the drive toÂ the GUID format. Since OWC/MacSales targets the Mac market, all their drives comeÂ set for immediate Macintosh usage.

The drive comes with plenty of cables: FireWire 800, USB 2, and for people who’sÂ computers don’t have a FireWire 800 port, a FireWire 800 to FireWire 400 cable.Â There’s no need to buy anything to use this drive! 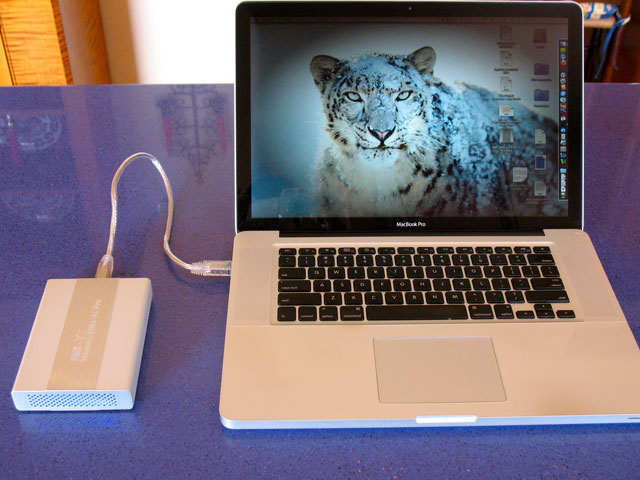 The unit is bus-powered, so there’s no external power unit. The only exception isÂ that use of the eSATA interface requires an optional $7.99 external AC adapter, orÂ plugging in a FireWire cable to power the drive, as the eSATA cable does not provideÂ power from the computer to the drive.

So, just how fast is the Mercury Elite-AL?

Eschewing the use of dedicated testing application, we used our 2.66 gHz Mac Pro forÂ real-world testing. While the Mac Pro was busy OCRing several large PDF files usingÂ DevonThink Pro, with Apple Mail, and Safari running as well, we copied a number ofÂ large files from the internal 160 GB Intel X-25M solid state drive to the MercuryÂ Elite. Our Mac Pro’s internal Intel SSD can push data out at an exceptionally speedyÂ pace, so it was just a matter of how fast could the Mercury write it down.

One such file was a 7.25 GB ZIP file. We watched the copy speed using OS X’sÂ Activity monitor. It took 20 seconds to copy the first gigabyte, 35 seconds to copyÂ two, 53 seconds to copy three, and the whole 7.25 gigabytes took 2:05. Most of theÂ time Activity Monitor showed a write speed of 65-68 MB/seconds, with spikes up to 70Â MB/second, and droops down to 35 MB/second.

Transfer rates for copies from a late 2008 2.8 gHz 15″ MacBook Pro with a stock Apple 320 GB drive were slower. Several large file copies averaged 30 MB/seconds, reflecting the fact that the MacBook Pro’s internal 2.5″ drive cannot read data anywhere near as fast as the Mac Pro’s Intel X-25M SSD. The Mercury Elite can write data as fast as it can be sent over the FireWire cable. OWC’s data sheet lists a theoretical FireWire 800 maximum transfer rate of 100 MB/sec, but I don’t have any way of verifying that claim.

Clearly, with a 7200 RPM mechanism andÂ FireWire 800, the Mercury Elite is a very speedy drive.

While the drive itself is what you’re after, OWC throws in a a tasty collection ofÂ OS X freeware and shareware, as well as a full version of ProSoft Engineering’s DataÂ Backup, a highly capable commercial backup application. Intech HD SpeedTools is alsoÂ included. OWC warrants the whole shooting match for three years, so you’re getting aÂ lot for your dollar.

Conclusion. The 320GB version of the Mercury Elite-AL is a fast drive in a greatÂ case. A three year warranty and the inclusion of a useful software collection makes this an even better buy.