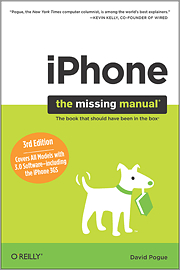 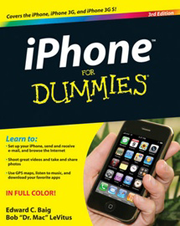 It’s no mystery to anyone who has ever used an iPhone that part of the reason it revolutionized the cell phone industry was its amazing ease of use. Apple knows about user experience and ease of use. It’s what they do. When it came to creating a phone, they threw out everything we knew about mobile phone interface design and literally created a product so simple that a three year old child can take it and be happily playing games on it after just a few minutes of demonstration. I know this because I often have to borrow my iPhone from my daughter, and she’s become extremely adept at switching programs and learning what types of inputs each new game requires.

Given this incredible ease of use, it might seem like an unnecessary expense for the average user to purchase any books about the iPhone. Still, there is more to the iPhone than meets the eye, and both iPhone: The Missing Manual, 3rd edition and iPhone For Dummies, 3rd edition do an excellent job at bringing those aspects of the iPhone to light.

I’ve had an iPhone since the 3GS was released in the United States on June 19th of this year, so I’ve had a lot of time to play with it and explore all the features and applications. Still, I found to my delight that I did learn new things about my iPhone by reading these two books. I received and read iPhone: The Missing Manual first, so I had a few more eye opener moments with it than I did with iPhone For Dummies. However, if I had read just iPhone For Dummies, or if I’d read it first, that book would have equally provided those revelations.

For example, I didn’t know about immediately dumping a call to voicemail by quickly tapping the Sleep button twice. I’ve never merged calls or held a phone conference, so it was interesting to read about that feature. Somehow, to my eternal shame, I’d never noticed that in the Photos application, clicking on the button that takes you to the sharing options, you’re also offered the ability to select multiple photos, which greatly eases deletion of several photos. Finally, I did not know until I read it in iPhone: The Missing Manual that a single tap on the screen with both fingers in the Google Maps application would zoom the map back out. What a cool feature, and I wouldn’t have known about it had I not read at least one of these books!

If you are someone who feels they could benefit from having a good iPhone book, maybe you’re wondering whether to choose iPhone: The Missing Manual, 3rd edition or iPhone For Dummies, 3rd edition. After reading both of these books cover to cover, I think no matter which of these two books you choose, you’ll learn a lot and have fun at the same time.

David Pogue’s books are famous for their sense of humor, and iPhone: The Missing Manual, 3rd edition, is no exception. It’s fun and lighthearted, and you don’t realize just how much information is packed into the book until you start flipping back through sections you’ve read to get an overall picture of the book in your mind.

Similarly, iPhone For Dummies, 3rd edition, is written in a humorous tone, with lots of little puns, sometimes humorous or fun tips, and generally a fun attitude. I like humor in books that teach technology, if it’s done appropriately, and it definitely is done right in both of these books. I would score both books even for sense of fun and enjoyment in reading.

Printing conventions used in a book also greatly affect readability. This includes things like fonts, sidebar style, and how tips are emphasized. I personally enjoy the printing style of The Missing Manual series more than that of the Dummies books. I find the fonts used and the methods of setting apart tip sections easier on the eyes, and this makes it easier for me to absorb the information being presented.

This is not a knock on the iPhone For Dummies, 3rd edition book per se, as it follows the conventions used in all of the books in the For Dummies series. It is distinct and easily recognizable, but I find it somewhat distracting. For this reason, I personally found The Missing Manual book to be more relaxing to read than the For Dummies book, but this definitely falls under personal preference. Your experience may vary considerably depending on your own visual tastes.

The iPhone has a lot of uses. iPod. Phone. Internet device. Pocket computer. Game machine. Both books cover in detail all of the core functions of the iPhone in detail. There are a couple places where it feels like The Missing Manual book goes into slightly greater detail, and it’s no surprise since it does have over a hundred more pages than the Dummies book.

For example, in their respective sections on the phone part of the iPhone, The Missing Manual goes into greater detail on conference calling, and it points out that a single tap on the Sleep button will stop the phone ring from playing through the speaker while letting the phone still ring for the caller (giving you time to answer but not annoying everyone around you in the meantime). However, when comparing the two books, it never felt like the iPhone For Dummies book was short of information. Everything you need to know is covered.

The main difference is that in the iPhone For Dummies book, there are more sections of the book where the humor is pushed aside for a second and the writing becomes very efficient and to the point. The Dummies books are known for being concise so as to not overwhelm the reader with information, and iPhone For Dummies, 3rd edition, feels very much like a typical For Dummies book in this regard.

Regardless of which of the two books you read, you’re going to get a solid handle on the fundamentals. Both cover the iPhone’s physical aspects, using the phone, the virtual keyboard, the iPod functions, email, Safari, general settings, apps, the app store, syncing, texting, the camera, and more.

When evaluating these books, probably the best way for me to recommend the best book would be to consider the potential recipient. Does the person reading the book want and/or need more detail? Or do they want a solid book filled with what they need to know, but slightly briefer and quicker to read? It really comes down to that when considering which of these books I would recommend over the other. Both books really do provide all the information a new iPhone owner needs and probably wants, and both do so in a very user friendly manner that avoids confusing the reader or causing him or her to miss anything important. The iPhone: The Missing Manual book does provide a little bit more in the way of talking about pros and cons of various features, and workarounds. It’s definitely useful and appreciated material, but it does make for a lengthier read. I know a few people who would probably prefer the slightly terser approach of iPhone For Dummies.

If I were to choose just one of these books for myself, my slight preference would be for iPhone: The Missing Manual, 3rd edition. My reasons for this are that I do prefer the visual style of The Missing Manual series over that of the For Dummies series, as well as enjoying the small bit of extra information on most topics. Again, it’s subjective. But as far as covering what is really important for an iPhone owner to know about their cherished device, they’re both great books. All of the authors involved are knowledgeable, enjoyable writers, and they cover the material clearly, accurately, and efficiently. I wouldn’t hesitate to recommend either one of these books to an existing iPhone user who wants to find out what they missed along the way, or to a new iPhone user who wants to know everything about their phone from the start.

MyMac.com Review Rating for iPhone: The Missing Manual, 3rd edition: 10 out of 10

MyMac.com Review Rating for iPhone For Dummies, 3rd edition: 9 out of 10

One thought on “iPhone: The Missing Manual, 3rd edition, and iPhone For Dummies, 3rd edition
Reviews”