It seems like most people just use the Apple earbuds that come with their iPods, but if you’re mowing your lawn you can’t hear your music. If you’re running, the earbuds won’t stay in your ears. Thus the need to buy in-ear earbuds.

ifrogz sells an extensive line of earbuds and headphones, some of which have built-in mics like the Reflex and Timbre reviewed here. 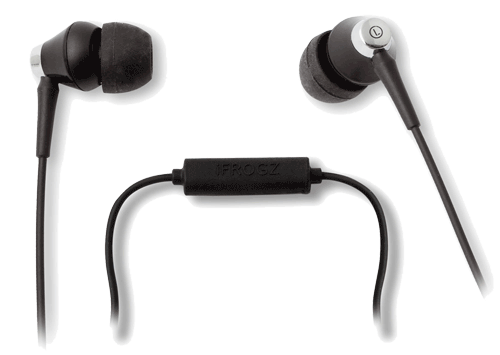 I’ve only used one set of in-ear earbuds prior to this (I have to admit, I’m not a big audiophile), so I was very surprised at how different these two were. One assumption I had is that all in-ear earbuds act like earplugs and keep sound out. Not true, as I discovered with the Reflex in-ear earbuds.

The speaker chamber of the Reflex is a little smaller than the Timbre. This results in a couple things: The sound compared to the Timbre earbuds (and even the Apple Earphones with Remote and Mic that came with my iPod touch) is kind of tinny and the larger gap between the outer part of the ear-fit piece and the speaker chamber means that you can’t hear the music when you’re mowing. This was an issue with all 3 sizes of the ear-fit piece. Not blocking out surrounding sounds isn’t necessarily a bad thing. If you’re a jogger you want to be able to hear things like cars that could pose a danger. 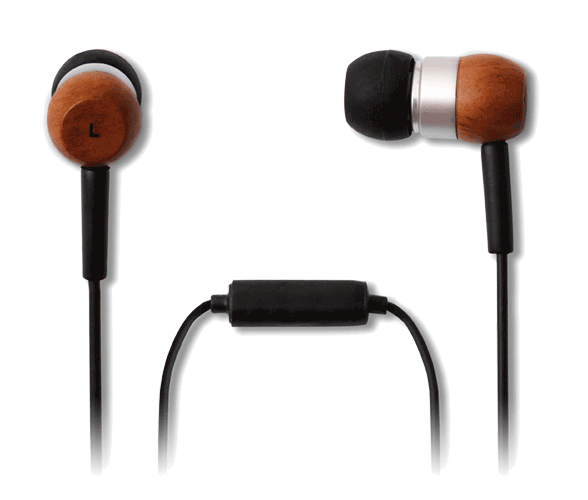 The Timbre, with its unique wood speaker chamber, has a much richer sound without being as bass heavy as the in-ear earbuds I am accustomed to. The wood and the larger opening into the ear I think are what accounts for the better sound since statistically (as listed on the boxes, only the sensitivity rating is different) the two sets of earbuds are identical. The only negative thing I have to say about the Timbre is that I’m a bit nervous about how durable it may be. When removing them from my ears, the small tube that the wire passes through tends to pull out of the wood speaker chamber on the right side. It doesn’t happen on the left side, so I’m guessing that trait is peculiar to the particular pair I have. The Timbre passed the lawn mower test with the smallest ear-fit pieces, but not the medium & large ones. A version of the Timbre without the mic is available for $39.99.

Both sets of earbuds come with 3 different sized ear-fit pieces and a built in microphone. Your mileage may vary with the ear-fit pieces, of course, based on the shape of your ears. The microphone works well with the iPod touch. Recipients said Skype calls were clear. As a bonus, the microphone also works with Macs that support a stereo headset with a built in microphone. Skype call tests were good here too, but I also discovered that the Timbre and Reflex mics (as well as the Apple Earphones with Remote and Mic) are not of good enough quality for podcasting.

Something I stumbled across a couple weeks ago is the fact that the mic also is a clickable button. It’s not mentioned on the box or the web site, and I only discovered it out of the habit of using the buttons on my Apple earbuds. What it did for me was unpredictable, but most of the time it did nothing. Sometimes it changed the volume, sometimes it did a play or pause. An anonymous inquiry to ifrogz support found them unsure about what it should do. They suggested searching the web and that the button would work however it was supposed to with the particular device it was connected to. Since the button doesn’t seem to officially exist, and in case my iPod touch doesn’t support it, I can’t really hold this against the product but they should have been able to tell me how it should work with my iPod touch. Some competitors have earbuds with a 3 button remote and mic just like the Apple Earphones with Remote and Mic, which I don’t believe Apple licensed until after these ifrogz products were introduced. That would be a real nice feature in a future version.

ifrogz EarPollution Reflex Earbuds with Mic 6 out of 10
Pros – Compact, multiple ear-fit piece options, decent mic.
Cons – Not quite as much bass as I like (and I don’t like bass heavy sound).

ifrogz EarPollution Timbre Earbuds with Mic 8 out of 10
Pros – Rich sound, multiple ear-fit piece options, decent mic.
Cons – Not sure about their durability.

One thought on “ifrogz EarPollution Reflex and Timbre Earbuds – Review”