An iPhone has a tough life. Getting shoved into someone’s front pockets all the time, getting tossed around on tabletops, sliding into and out of docks, and suffering the indignity of sweaty hands during intense game play are all going to take a toll on a sensitive piece of equipment. I threw chance to the wind and for a long time, I was a MyMac’er who rolled with his iPhone exposed and naked, susceptible to all the abuses of world around i 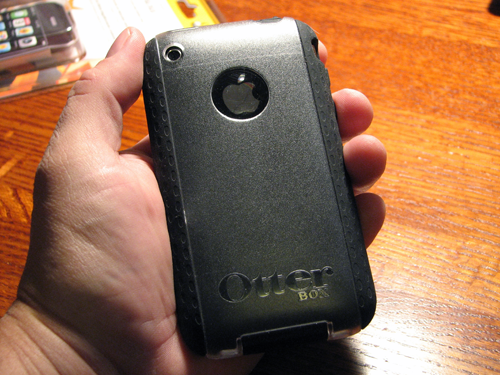 You can guess what happened next. I was surprised one morning to see a small hairline crack in the back case of my iPhone, running about a half inch up the center of the case from the dock connector. Distraught and angry with myself for my carelessness, I sought a solution to this dilemma. I certainly didn’t want the crack getting any larger, especially with another seven months to go before I could upgrade to a 3GS! I knew right then a decent case was in order for me.

Otterbox has a reputation for building cases that are just plain tough. When I saw the company had just released a new line of Commuter cases, I thought they would be worth a try – and I wasn’t disappointed.

Both styles of Commuter cases consist of two parts; an inner, soft silicone cover, which goes on easily, and an outer, hard-plastic shell that requires a bit more effort to get on the phone. That extra effort is worth it, though. The TL has a clear hard-plastic strip that runs up the center of the back of the iPhone, protecting even the Apple logo that is visible through a round opening in the silicone inner liner. The TL leaves the silicone liner exposed on the sides of the iPhone, giving it a “cushiony” texture when hefted.

The Commuter has a more substantial hard-plastic outer shell, protecting even the sides of the iPhone. The Commuter leaves the Apple logo exposed, though. The hard-plastic also seems a bit slipperier as well, but not enough to make me worry about dropping my device. Both cases have a truly solid feel and and slim design that keeps with the elegance of the iPhone. They fit well in the hand, and I felt assured my iPhone was protected without any bulkiness. 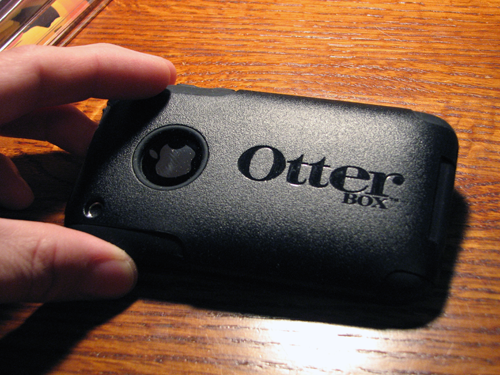 When trying out the Commuter cases, I liked that nearly all openings are protected in some manner. The headphone jack and dock connector opening are covered by hinged silicone flaps. This is a design element that is often overlooked by case makers. If you’ve ever had to take an iPod or iPhone to the Genius Bar at an Apple Store, you know that one of the first things the Genius does as a diagnostic test is to whip out an illuminated magnifier to check the water exposure strips in the dock connector and headphone jack. If the strip has turned pink, they won’t honor your warranty because the device has been exposed to water.

A case with coverings for these openings could prove invaluable should anything go wrong with your iPhone. Unfortunately, the flap makes it impossible to dock your iPhone. Connecting your USB cable to the phone takes some getting used to, which is a pain. It’s a “Catch-22” situation; you want the protection for your iPhone, but you would also like to easily dock your phone. Unfortunately, a compromise needs to be made somewhere, and I’d rather make mine to protect my investment. 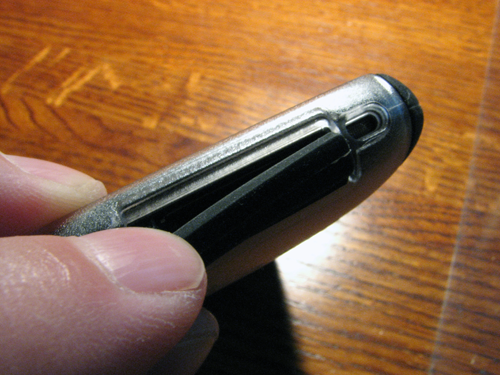 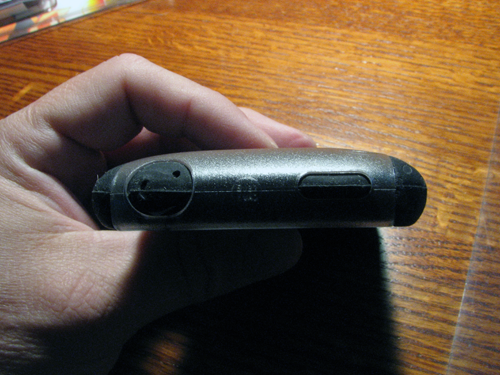 In the past, I owned a SwitchEasy Rebel Serpent case that had a small silicone protective piece that slid into the dock connector, but wasn’t attached to the case. While the snakelike design of the Serpent looked cool, within weeks that little piece fell out, lost forever. This left the bottom strip of the Serpent’s silicone rubber sliding all over the place, because the now missing insert no longer stabilized it. Contacting SwitchEasy three times over four months resulted in frustration because they refused to replace or sell the part. This isn’t an issue for Otterbox’s Commuter cases.

The Commuters are supplied with a clear protective film for the glass front of your iPhone. The film goes on easily and is nearly invisible. There is no interference with the capacitance of the touch screen. After two weeks of heavy use, there are no visible bubbles or any edges peeling up, as is the case with nearly every screen protector I’ve ever used on an iPod or iPhone. That might seem minor, but it demonstrates attention to detail on the part of Otterbox – a very Apple-like quality.

When shopping for a phone case, one concern may regard its functionality. Will it interfere with the normal operation of your iPhone? The Commuter series answers this concern by providing protective coverings for all buttons, except for the mute switch. The silicone inner liner allows for easy depressing of the buttons, especially the volume controls.

Overall, I’d say that either Commuter or the TL would suit just about anyone’s needs. My 10-year-old son, Sam, likes the Commuter TL best. Anyone looking for a slightly less-expensive, more colorful case should choose this model. My initial fears that the softer sides of the case can let more dust and lint from your pockets get into the case, but I am pleasantly surprised that after four days of heavy use shows almost no dirt/pocket lint behind the phone. My personal tastes favor the slightly more expensive, classier-looking Commuter. I like black cases, and the more substantial plastic shell make me feel like my phone has even more protection. The sides are held more firmly in place by the Commuter as well – a fact I am concerned about because of the cracked back on my iPhone.

I plan to continue to use the Otterbox Commuter case on my own iPhone. Despite an inability to dock the phone, I feel that the great looks and superior protection are worth the concession. I highly recommend the Commuter series to anyone looking for a decent case from a company that, in my opinion, is just as committed to quality as Apple itself.