In the world of digital photography, there is life after death. Which is to say that if you’ve reformatted your memory card and erased all the photos stored on it, you can usually bring them back in just a few minutes using one of several software programs designed to do just that. More than once I’ve reformatted a camera’s card only to discover that I really wanted a couple of the images I had deleted. Until recently, I thought that gone meant gone. Two programs, Klix from JoeSoft, a division of Prosoft Engineering, and CardRescue from WinRecovery Software, proved me wrong.

Both programs will recover photos from any card reader or digital camera and all types of memory cards. Both are simple to use, but CardRescue has a major flaw that may drive you crazy if your card has a lot of images on it. When it recovers images, its preview window will only show you six photos at a time. You place a checkmark in the box under those you want to recover and move on to the next six. My memory card had approximately 300 photos on it, which would have required a lot of time, not to mention patience. 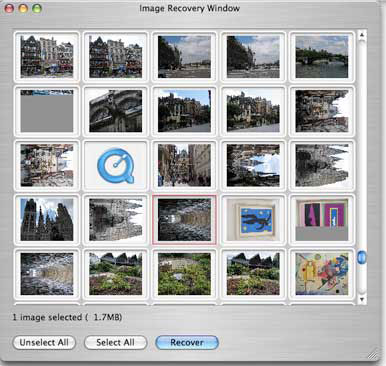 Up to a point, CardRescue and Klix are pretty much the same. The big difference is that once Klix has identified your recoverable photo files, you will see every one of them in your preview window. Here’s how Klix works:

You start by plugging your digital camera into a USB port, or by removing the memory card from your camera and inserting it into a card reader. Then you launch the program. Klix will quickly recognize your card and offer you three options: Erase Card, Format Card, or Start.

Clicking on Start will launch the scan and recovery process and open an Image Recovery Window. If you have 300 or more photos on the card, go do something that will divert your attention for three or four minutes.

Once the photos have been recovered, all of them will appear as thumbnails in the Image Recovery Window. You can then click on Select All or Unselect All. But if you only want to recover three or four photos, you can also select individual images by holding down the Command button and clicking once on the mouse. Repeat that process for each photo you want to recover. The program then brings up the Finder window and you can select a folder where you want to store the recovered photos, or create a new folder.

There is one caveat that applies to all image recovery software.There are times when they can’t recover some photos. Here’s why: When you reformat your camera’s memory card, your photos aren’t actually sent to NeverNever Land, even though most cameras warn you that you’re about to lose everything. The erased images are, in a manner of speaking, set aside in a parallel universe where you can’t see them anymore, but they’re really still there. That is, until they’re overwritten.

For most users, there is only a slender possibility of over-writing those old image files.1GB and 2GB Memory cards are capable of recording so many photos â€” 500-1,000 is not unusual â€” that it’s pretty unlikely most consumers will reformat a card and then shoot 700 or 1,000 more and overwrite everything that was on the card.

The good news is that it doesn’t matter how many times you reformat your memory card. If you haven’t overwritten all the old files, you can still recover the images.

Card Rescue has a couple of features that you won’t find in Klix. While it’s scanning your memory card, it shows you how long it will take to complete the task. When it’s done, it will bring up a list of the file names, rather than the images itself. Since digital camera file names are basically useless, I didn’t find that useful. Nevertheless, the program was reliable and fast, and if only it brought up more than six recovered photos at a time I would have recommended it. 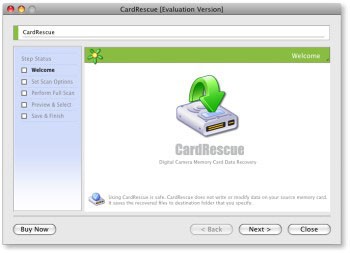 Unless you shoot only a handful of frames on any outing, I’d buy Klix.

Klix MyMac Review Rating: 9 out of 10

CardRescue MyMac Review Rating: 5 out of 10