California, like many other states, recently enacted a â€œhands freeâ€ law when using cell phones while driving. It is now illegal to hold a cell phone in your hand while talking on the phone and driving. (Note to some drivers, hands free does not mean you can still hold the phone in front of your face instead of near your ear and talk on speaker phone! It means â€œhands freeâ€!) Sure, you can look like a Star Trek character and wear one of those silly little Bluetooth earpieces in your ear, but I have never liked them. Personally, I do not find them very comfortable, and I have tried about 30 different ones. And they seem to always break after a few months, they easily get lost, either people have trouble hearing me, or I cannot hear them well, and they constantly need recharging after just a few hours. Even my expensive Jawbone broke twice! And using the speakerphone built into the phone is not a good option unless you want to yell a lot, they are just not meant for car driving. But there is another option, try a Bluetooth hand free speakerphone kit. 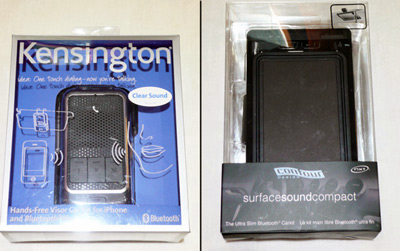 I tried two different units, both of which were similar in operation. Basically, you pair them with your Bluetooth phone much like you would a Bluetooth headset, and then clip them to your visor. Then, when a call comes in, you press a button, answer the call, and carry on your conversation. Since the unit sits on the visor, the microphone is right in front of your face, so the caller hears you well, Additionally, the speaker is also close to you, so the caller is also easier to hear over all the road noise. 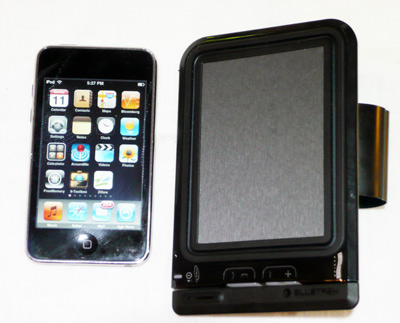 The first of these units is sold by Contour, and is called the â€œsurface sound compact.â€ This is a good looking unit that sits flat on the visor, and measures in at 5.51″ x 3.7″ x 0.51″ and weighs just over 4 ounces. To turn it on, you lift a small arm on the right side that also contains the microphone, moving it closer to you as well for better sound pickup. The unit beeps until it finds your cell phone and pairs, and then a female voice says â€œHandset Connectedâ€ to let you know that everything is ready. Very simple. 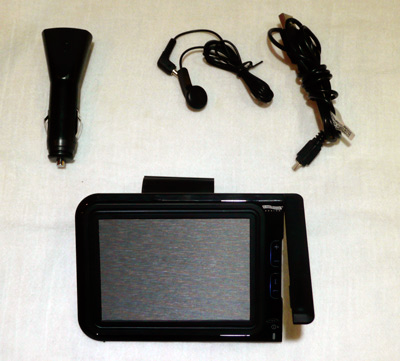 The speaker is a high tech, large, flat panel design, and produces great sound from the incoming call. The unit uses an internal digital signal processor to improve sound and eliminate echoes, and gets about 15 hours of talk time on a single charge, or 21 hours of standby time, MUCH better than a headset. For privacy, a small earphone is included, which can be plugged into the side of the unit, turning off the external speaker. There are only two rocker buttons on this unit, a volume up/down and an answer/hang-up along the right edge. They become accessible when the microphone arm is lifted, but I found them still hard to reach while driving. Charging of the internal battery is accomplished using the included USB cable, which can be plugged into the included USB cigarette lighter adapter, or a USB port on your computer. The battery is not removable, so you are either charging in your car or next to your computer. 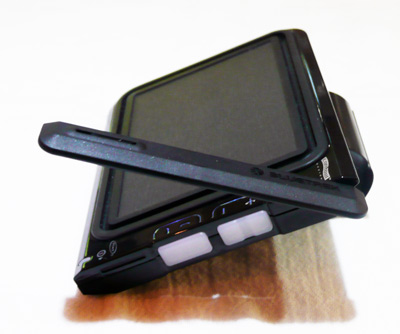 While overall call sound quality was fairly good, it did tend to pick up a lot of background noise in my tests. While I liked the beeping sound it made while trying to connect to the cell phone, this unit tended to drop the Bluetooth connection every few minutes, and then immediately try to reconnect. Each time it would do this, it would start beeping again. After about 30 minutes of this over and over, I ended turning the unit off, quite tied of the beeping at that point. I hoped my unit was defective, because this was very annoying, and Contour agreed to replace it. Unfortunately, after finally receiving a replacement unit, the new unit failed to pair with my phone at all, so I could not test it. Quality control obviously seems to be an issue here. 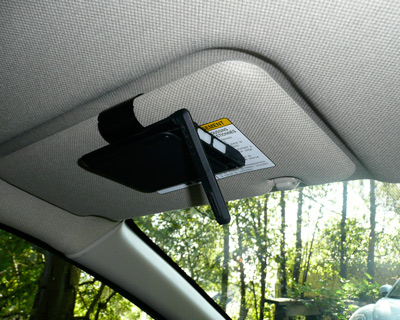 I like the looks and sound of this unit a lot, but if my two samples are typical of the quality control, there is a serious problem here. In addition, Contour only markets the unit which is actually built by Bluetrek, and the two companies had differing opinions on just who should handle my technical issue. Not good. 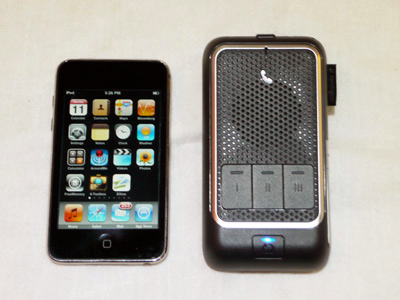 The second unit I tested was from Kensington, and is called the â€œHands-Free Visor Car Kit for iPhone.â€ Donâ€™t let the name throw you, as it can be used with any Bluetooth phone. While at first glance this unit does not look as slim and sleek as the Contour, it is actually a bit smaller in length and width, and only a fraction of an inch thicker at 4.68â€ x 2.4â€ x 0.63â€ also at about 4 ounces. That said, it is nowhere near as stylish as the Contour unit, looking more like a small little box with holes in it. Style is not its strong point. 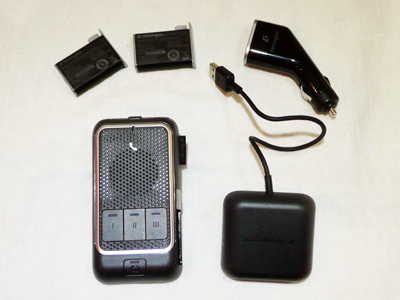 This unit turns on with small button on the side, and offers a two-tone beep to tell you that it has found your phone and paired. Unlike the Contour, this unit has more controls and options, but also looks a bit more cluttered with the extra buttons. I liked that the volume was easily changed by a physical slider control along the top, much easier to reach, read, and use while driving than a toggle button. There are also three large â€œspeed dialâ€ button on the face of the unit, but they are a bit strange to set. First, you must receive a call from the number you want to save, and while the call is in progress, press and hold one of the three buttons to save the incoming call. If successful, a blue LED will light and the number will be stored. To use a speed dial, you simply press one of the three buttons and the unit will connect the call. To answer an incoming call, or hang up, you simply press the small phone icon just above the speaker. If the incoming call happens to be from one of your stored favorites, the blue LED in that button will also flash. Not exactly caller ID, but good for those three common numbers. There are two other LEDs on the front to tell you of the status the battery, power, paring status, and call status. 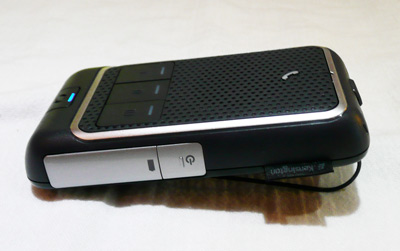 A few other features make this unit especially nice. First off, it comes with two removable, rechargeable batteries as well as an external battery charger, a USB charging cable, and a USB cigarette lighter adapter. This allows the charging of one battery while the other is in use. Talk time is around 10 hours on a full charge per battery, much less than the Contour unit, but batteries are easily swappable by quickly popping them out on the side and sliding in the new one, so that is actually 20 hours combined. This unit also allows it to be paired with more than one phone. To change users, and thus which phone it pairs with, just press the small button at the bottom of the unit. This is especially great for people who share a car, as either person can easily use it when they drive. 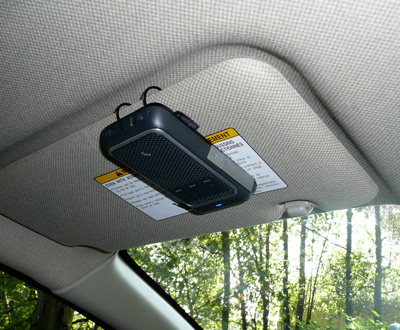 To test sound quality, I drove across a long bridge during non-rush hour. I drove the bridge twice, and phoned my answering machine at home to record a message from each device, then listened to the quality when I got home. I also called a few friends, twice! Sound quality on the Kensington unit was excellent. Background and road noise was all but eliminated from my voice, and the callers were fairly easy to hear as well. Output volume was lower on the Kensington than the Contour, but not significantly. In several test calls, the Kensington outgoing (my voice) sound quality was significantly better for the other end, even with Contour’s DSP technology. However, the large flat speaker of the Contour had much better incoming sound quality, and was easier to hear callers in a noisy car.

Side by side, both these units worked much better than any of the Bluetooth headphones I have used in my opinion, and callers said I sounded better and clearer on most calls with both units. Of course, unlike a headset, you cannot wear these everywhere you go, but maybe that is a good thing! They also both worked well sitting on a small conference table and on my desk as a conference phone. While the Kensington is $20 more expensive than the Contour, it seemed a rather small price to pay given its extra features, better sound quality, and what appears to be better Bluetooth reliability as well. And I especially liked the ability to pair with two phones. But in either case, both of these were an excellent alternative to wearing the little Star Trek thing in my ear, and let me stay legal as well.

Pros:
Hands Free in the car with nothing stuck in my ear.
Easy to use, and longer batter life over a headset.
Makes a better conference/speaker phone than phone’s built-in system.