Rocstor has been designing and manufacturing secure encrypted/unencrypted data storage solutions since 2000. You can find a broad listing of products on their website.

The AR is a very well constructed RAID enclosure with a minimalist design. All of the ports are on the back and the rest of the unit is a brushed aluminum enclosure that is quite appealing to the eye. When it is sitting on your desk, I’d bet others would ask you, “What is that?” 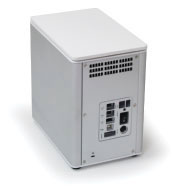 The acronym RAID stands for “Redundant Array of Inexpensive Disks” or “Redundant Array of Independent Disks.” Take your pick, either way it doesn’t mean much to the everyday Mac user. From Wikipedia:
“RAID” is now used as an umbrella term for computer data storage schemes that can divide and replicate data among multiple hard disk drives. The different schemes/architectures are named by the word RAID followed by a number, as in RAID 0, RAID 1, etc. RAID’s various designs all involve two key design goals: increased data reliability or increased input/output performance. When multiple physical disks are set up to use RAID technology, they are said to be in a RAID array. This array distributes data across multiple disks, but the array is seen by the computer user and operating system as one single disk. RAID can be set up to serve several different purposes.”
Simply put, a RAID array backs up your main data drive across multiple additional drives automatically.

I remember my Mom pulling old shoeboxes full of photos out of the closet. However, in this age of digital photography and movie-making, hard disks are asked to store, many times over, the contents of that old shoebox in the closet, and most people expect that data will remain on the hard drive forever.

But hard drives don’t last forever. They are hardware with moving parts inside. They will all wear out at some point. It’s not “if”- it’s “when.” (See article: https://www.mymac.com/showarticle.php?id=2777)
Which means a RAID array may be an important tool, even for the casual computer user, to add to your arsenal against drive failure.

The Arcticroc 4T is designed to hold four separate drives that, depending on the RAID scheme you decide to use, will write data across the various drives and allow you to pull out a drive that has gone bad and insert a replacement very easily. Once a new drive is inserted, the RAID will write to that new drive and fill it with data to match the other drives. No data loss, no down time, no fuss no mess. The Arcticroc makes all of this very easy.

Things I like about the AR:
Fairly quiet, lots of connection options (FW 800 x2, FW 400 x1, USB Type B x1, eSATA x1), good looking, feels sturdy, and solid. You can use the second FW 800 port to daisy chain. Very easy drive replacement via the SmartGuider system. Very easy access to the drive bay via a slide off top cover.

The unit writes data very quickly, though it will take longer for the unit to write to a newly inserted drive. Extra screws on the underside of the cover in case you lose one. The fans do a great job keeping the unit from running hot. With four full size 3.5” drives in this enclosure, you need a good cooling system. The AR unit comes with every cable you might need. 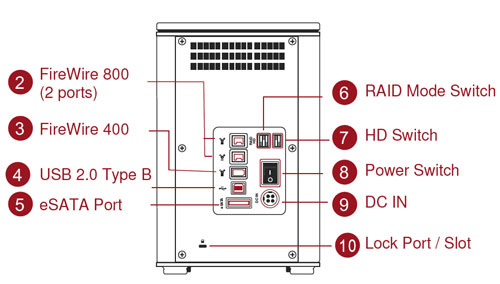 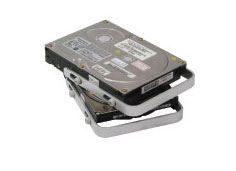 Things I didn’t like:
Choosing which RAID scheme to use, though the documentation from the website explains each and every RAID option in detail. Can’t break the drives up to mount as four separate drives. The RAID and HD DIP switches are very small, though I can’t imagine you would be changing them with any frequency. No labels on the front so you can’t tell which drive light is which. No Ethernet connection. You can not use more than one connection style. No documentation in the box I received. The folks at Rocstor tell me a quick start manual should be included while the main documentation PDF is up on their site.
Rocstor “recommends” the Silicon Image eSATA host controller when using the eSATA connection. 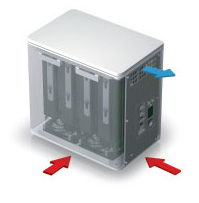 The Arcticroc also comes in a “2T” model. This enclosure holds two drives and has the same RAID options as the 4T. This enclosure can also be used in “JBOD” mode (Just a Bunch of Disks) which means you can mount the two drives separately.

Rocstor doesn’t sell directly. You can find the 4T enclosure (no drives installed) for around $250 US on the web.

This is a terrific drive enclosure. If you have lots of data (and who doesn’t nowadays) a RAID system may be just what you need to keep your data safe.
You will be very happy with the Rocstor Arcticroc.