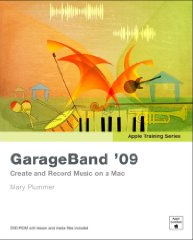 GarageBand is a music-making application that has grown significantly since its first appearance at MacWorld San Francisco in January 2004. Apple developed it under the lead of Gerhard Lengeling of Emagic, a specialist company which had been acquired by Apple 18 months previously. GarageBand 2 came in 2005; GarageBand 3 a year later. GarageBand 4 (also called GarageBand ’08) two years after that, in 2008.

This year the fifth iteration, GarageBand ’09, was published. In common with the other four versions, GarageBand ’09 forms an integral part of the iLife (in this case, of course, iLife ’09) suite. New in this latest version are the abilities separately to record individual sections of a piece; to create and export iPhone ringtones; support for automated tempi and instruments; a ‘Magic GarageBand’ featureâ€¦ a virtual ‘jam session’ with a 3D view of the instruments. For electric guitar players there is now a dedicated 3D track. The interface has been redesigned and is easier to use; there are also project templates. Significantly, too, GarageBand ’09 includes its own music lessons and allows the user to buy instructional videos by contemporary musicians.

These – and the rest of GarageBand ’09’s features – are the subject of a new, comprehensive and very well-written and produced book by Mary Plummer.

Despite the bundled tutorials, paper-based instruction is still very useful. Such a book as this is particularly welcome to anyone new to the software, which requires Mac OS X 10.5. or above. The GarageBand ’09 software’s functionality and interface can be confusing or slightly overwhelming. A guided, graded introduction is a boon. And if it takes you further into the less immediate features of the software, as this book does, so much the better.

‘GarageBand ’09 (Apple Training Series)’ is written by experienced musician and (Apple Certified) trainer, Mary Plummer. It’s clear from the first word that she knows her subject; and that she understands teaching and learningâ€¦ for instance where the absence of small reminders (such as that 10.5.6 is needed as you consider an interface for your instrument because that’s what GarageBand ’09 itself needs) would confuse, she gives them. You soon feel in very safe hands. 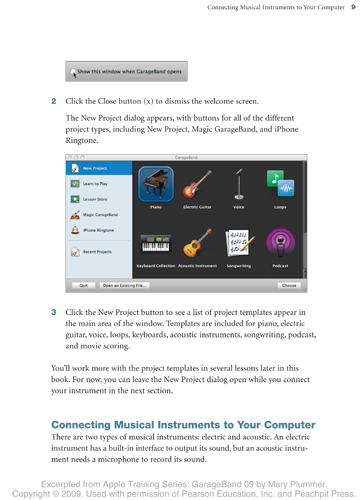 This Peachpit book is also part of the Apple Training and Certification Program. The material it contains has been certified by Apple and aims to leave you sufficiently well-prepared to take the necessary qualifications for Associate-level proficiency in the relevant entry-level examination for the iLife ’09 product suite. It offers a discount of 30% on the exam costs. The book can also be registered with PeachPit as a Safari Book Online and viewed online for 45 days.

The book is divided into eight lessons, all the material for which is on the accompanying DVD. These lessons cover: Learning to play music; Jamming with a virtual band; Recording Music; Scoring a movie, arranging loops; Creating a ringtone; Mixing music and effects; Podcasts; and Sharing your work – as well as a 30-page appendix of bonus lessons/materials. The shortest lesson is just 16 pages and the longest 51. The progression – essentially from installation, first time opening, connecting a MIDI keyboard through to publishing via iWeb or iDVD – is a logical and realistic one. The steps between stages are neither too steep nor do they labor points when to do so would irritate.

Typically each lesson contains one or more sequence(s) of a dozen or so tasks broken down into from two or three to up to 20 steps. The layout (with clear, color screengrabs and (close-up) photographs where needed) facilitates navigation through these stepsâ€¦ white space, alignment, numbering, use of meaningful color, consistent conventions for menus and so on all mean that you should in theory be able to complete what amount to project assignments simply and without error. Fortunately this isn’t one of those books which merely teach you how to complete itself. 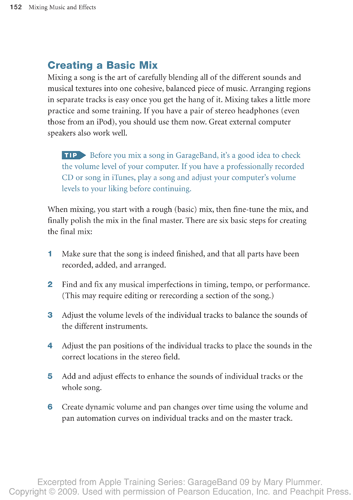 There is enough contexualising detail to explain why and how you are being asked to work through the exercises. It has to be said that these steps – rather than background and more focused explanation and theory – do constitute the bulk of the book’s material. This is deliberate: the approach is unapologetically ‘hands on’. What’s more, each is designed to build on material covered previously. If this is your learning style, then you will be well-suited to ‘GarageBand ’09 (Apple Training Series)’.

At various points throughout the lessons appear Notes and Tips – e.g. to the effect that you only get the ‘My Recordings’ track if you have first recorded your instrument in a lesson; that ‘M’ and ‘S’ toggle Mute and Solo; how exactly to crop an Artwork imageâ€¦ inexperienced users my not be familiar with the conventions: that they are catered for this way is all to the good.

What’s more, the book isn’t a glorified walk-through the menus of GarageBand ’09. The lessons take real world projects and guide you through their satisfactory completion from the point of view less of the tasks involved as of the objectives. Like all successful such approaches, you get to know the files with which you work. To that end there are almost always introductory paragraphs (or sections) explaining why and how you’re going to tackle what’s next. At the end of each, moreover, there is an informal summary of what you’ve just done – as well as a formal review of the material covered. This would serve as (the basis for) a useful checklist.

Each actual lesson contains at its head reference to the three or four files you’ll be using; an estimate of the time needed satisfactorily to complete it (that ranges from 30 to 90 minutes – and is particularly useful since the number of pages in the book allotted to each topic doesn’t invariably correspond to the time needed) and the half dozen or more goals. That’s all equally useful; and sound pedagogically. The index at the back of the book occupies nine pages and was found to be more than adequate for locating subject matter outside of the lesson sequence. 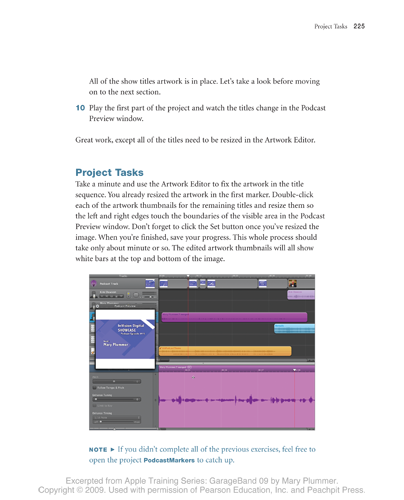 Pros: GarageBand 09 (Apple Training Series) is clear, comprehensive and well-paced. If you learn best by doing, by following tutorials that lead you through the software’s functionality, it will work well for you. It’s cleanly produced, well illustrated, simply written and relies on thorough explanations just when you need them.

Cons: If you prefer more of a narrative, a description and explanation of what Garageband 09 can do with projects taking a back seat, then the style of the book, no matter how well produced, may not suit.