SonicFire Pro 5 is marketed by SmartSound and is a competitor to GarageBand. It claims to be ‘the most innovative music scoring software in the world’. It’s a relatively complex package aimed at users who want to produce and output sound files (to accompany videos, for example) made up of canned effects and tracks.

Yet the interface, menu structure and workflow have been so well built that what could have been a series of bewildering procedures with many options really does sponsor greater concentration on your creative ideas than on having to pick your way through perhaps bloated features. Once you have become sufficiently familiar with it SonicFire Pro 5 allows you to strike an excellent balance and achieve professional output that sounds well in most appropriate contextsâ€¦ you’ll hardly write a string trio; but you will make a convincing pop video.

Complex
Yes, it does take some time to work your way through the various components of the package. There can be up to six floating windows open at any one time with various degrees of interrelatedness one to another. 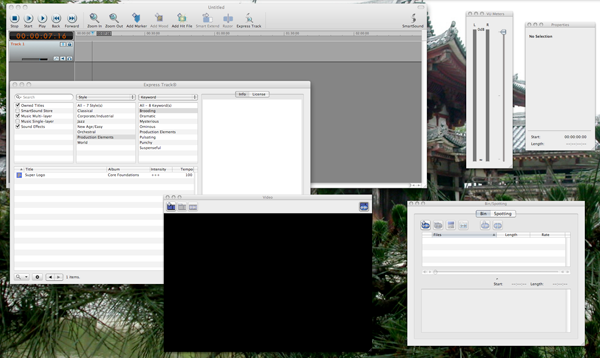 There are also various ‘editions’ of the software with a variety of new features:

Express Track is a searching tool that allows you to incorporate effects, snippets and short musical themes into your score from an online collection of (purchasable) music: scoring for SonicFire doesn’t mean the same as it does for a stave-based program like Sibelius. (The search for) these ‘mixes’ can be enhanced and refined: you advise SonicFire of musical characteristics (faster, slower, more with this instrument, more by that composer etc.) which you would like to emulate or have reproduced in your piece and it matches them. The software emphasizes mood – again not something that will be of immediate appeal to all music lovers; but as a way to put sound with vision, it more than does what it’s supposed to.

‘Tap Tempo’, for example, lets you state how many beats per minute you want to use. The Jukebox playback feature previews a set of search results without a break. Your resulting piece (whose tempo and pitch can easily be changed) can then be exported to work with a variety of industry-standard video and audio editing apps. (The documentation says “all” such software.)

The Scoring Edition additionally has a timeline-based editor further to customize your composition. This supports keyframes, timing controls (to sample a beat and alter it to match a video), offset from the start, spotting and timing even more precisely to synchronize points in a video (such as ‘hit points’) to markers in the soundtrack.

A network add-on is available for a further $99.95, which will allow you to share and distribute your work amongst multiple users.

When first run, SonicFire Pro looks for available data and program updates, downloads them and invisibly installs them. This is typical of the streamlining that has gone into making the product as easily usable and flexible as it is.

Most of your work will be done in the main project window. It’s a testament to the conception and design of the package that the documentation (which runs to under 150 pages) can nevertheless thoroughly explain its use and features. You quickly get used to a sequence of add – listen – refine – listen – export without interference from controls and options. Commendable.

If you have a need to work with a highly transparent and simply thought-out music editing application, SonicFire has a venerable history, was robust and reliable during testing and may well be for you. As a bonus when buying Toast Titanium 10, it’s hard to turn your nose up at.

SoundSoap (the SE edition – which is standalone) is the second audio product to be bundled with Toast Titanium 10). It’s a noise reduction and sound restoration tool. And a good one.

The idea is that, using as few controls as possible, hiss, ambient noise, rumble, (electrical, 50 & 60 Hz) hum, clicks and pops, crackles, and other background noise can be removed from files now digital of course and likely originally to have been analogâ€¦Â those from tape cassettes, vinyl LPs and conceivably broadcast material spooled to your computer. Their tone can even be ‘enhanced’ using a slider in the same way as graphics software boosts colors and contrast etc. This version also allows the mouse scroll wheel to control knobs and sliders. 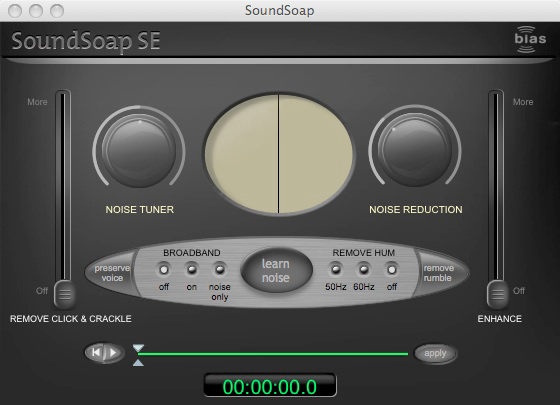 Using a single window you control all the features of SoundSoap. In fact, it could hardly be simpler to use. A rather attractive, ‘brushed charcoal’ interface has two ‘knobs’ – for noise ‘tuning’ (threshold) and noise reduction. Two vertical sliders control the degree of click/crackle, and enhance the result. Six buttons then allow you to reduce broadband noise (more random: the interference doesn’t respect a regular time frequency) and hum.

Intelligence
Given the fact that almost every sound source will be different, such tasks as those performed by SoundSoap are likely usually to be manual. Nevertheless, the software also has a ‘learn’ feature that automates the process: from even a short extract it anticipates the cleanup likely to be needed throughout the rest of the file.

Similarly, in the case of media with prominent voice content, a specialized filter, ‘Preserve Voice’, preprocesses such sound to avoid the risk of losing the unique profile of the voice when other imperfections are dealt with.

This software is a pleasure to use – not only because of its simple interface, but also because it is as effective as it is. There’s rarely something for nothing in life. And to remove something almost always results in less than you started with. But if you want to improve on old, treasured media with all their imperfections, this is as good a way to do it as anything else of its kind available. And to have it ‘free’ with Toast makes the bargain especially sweet.

The documentation is thorough and easy to use: the induction into this area can be painful – it’s technically quite complex. But by using ‘real world’ examples and illustrating all the steps carefully, you quickly become something of an expert. Or enough of an expert significantly to improve on your older and noisier media.