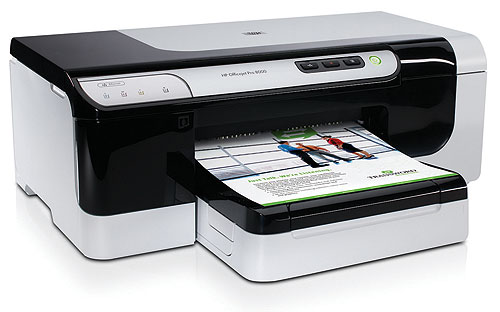 For a small office, choosing a color printer often means deciding whether to go the laser or the inkjet route. Typically, workgroup laser printers are more expensive to purchase up front but have lower overall consumable costs, while inkjets are cheaper to buy but when printing large numbers of documents, the consumables actually end up costing more. The HP OfficeJet Pro 8000 makes a pretty good argument for the inkjet side of things; it’s got remarkably fast print speeds for an inkjet, a 250-sheet paper tray with built-in duplexer, 32 MB of built-in RAM, USB/wireless/Ethernet connectivity, and (at least according to HP) a 50% lower cost per page than comparable laser printers when used with HP’s high-capacity cartridges. At only $159 list price, could this printer really be a viable alternative to a workgroup color laser?

One of the reality checks we’re faced with when it comes to inkjet printers is how quickly the cartridges need replacement-and how quickly that adds up, financially speaking. That’s one of the primary arguments for going with a laser if you’re planning on printing thousands and thousands of pages each month; even though each laser toner cartridge might cost upwards of $125 each, you will typically get a lot (as in thousands) more pages out of one than you will from a $19.95 inkjet cartridge. The OfficeJet Pro 8000’s color cartridges list for $19.95 but claim a page yield of 900 pages; the high-capacity versions will run you only $6 more but have a 1400-page yield (keep in mind that page yields normally assume 5% coverage). That’s very competitive when compared to laser toner costs vs. page yields, and when you consider that you can buy this printer today for only $159 (with street prices are as low as $127), it does seem a very attractive alternative to a laser printer.

For the environmentally-conscious among us, there’s even more to like. Not only is the 8000 ENERGY STAR® qualified, but HP claims it uses up to 50% less energy than color lasers. Because it’s got built-in duplexing (not typical of most inkjets), you can reduce paper consumption by 50%. Plus, HP actively promotes recycling of not only the toner cartridges but the printer itself through the “HP Planet Partners” recycling program.

I am compelled to point out, however, that for a “green” printer, the unboxing process sure created a large pile of rubbish on my office floor, all of which (except for the cardboard) I assumed would be headed for the waste stream. But even here, HP took the initiative to package the two printheads in recyclable plastic trays, very clearly indicated with a large “2” recyclable symbol. So, extra green points for that. Setup was pretty typical for an inkjet printer, although the initialization process, as the instructions warned, really did take upwards of 20 minutes. I’ve never seen any output device take anywhere near that long to initialize, but it’s a one-time thing, and the 8000 thoughtfully cranked out a page informing me that the printer was in fact initializing and that it could take up to twenty minutes, so all is forgiven.

The software installation was relatively straightforward. HP provides an illustrated full-color setup guide/poster as well as a separate “Wireless Getting Started Guide” booklet, a thoughtful inclusion but really not necessary as the installer guides you through the entire setup, whether you choose wireless, wired Ethernet or USB. The wireless setup first requires that you connect a USB cable to the printer (HP includes a USB cable, unlike some other printer manufacturers [are you listening, Epson?]), which actually makes perfect sense from my perspective. I’ve been confronted with wireless printers that force you to use their built-in control panel to configure wireless networking by arrowing up and down innumerable times to input IP addresses and subnet masks, a process which is tedious at best and painfully frustrating at worst. Oddly enough, the software prompted me to connect the 8000 to my wireless “n” network first, even though its wireless interface is b/g only. Once I redirected it to my “g” network and provided the password, it joined without any fuss.

As with other HP printers, the default installation installs a seemingly endless array of programs and utilities onto your Macintosh, but the 8000’s installer thoughtfully provides an option to install only the print driver and basic utilities, should you not wish to avail yourself of all the bundled HP software. If you do go ahead and install everything (which I did deliberately for purposes of this review)-only to regret it later when you see all the new HP icons crowded into your Dock-I can confirm that the included uninstaller works extremely well, removing virtually every item the installer installed, as well as uninstalling itself when it’s finished. For what it’s worth, the printer driver and software is fully compatible with OS X 10.5, as well as 10.4.11 (my test platform).

For those of you curious about the bundled software, it consists of the following: 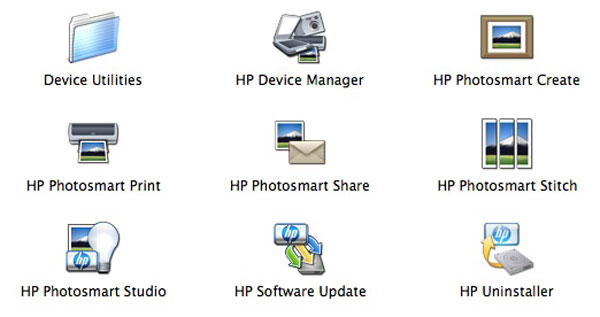 The OfficeJet Pro 8000’s complete install gives you a multitude of image-related applications. Although these apps might be quite helpful for some users, I found the one at bottom right to be the most useful of all.

I certainly don’t mean to cast aspersions on HP’s included software bundle; in fact, I’ve seen “Mac-compatible” printers arrive with nothing but an outdated driver on a Windows-only CD. It’s just that I get kind of antsy when I see program after program after utility after utility being loaded onto my Mac, knowing that it’s highly unlikely I’ll ever make use of any of them. Of course, your mileage may vary, but when all is said and done, what really matters is whether or not the 8000 lives up to its promise of quick, economical printing over a USB, Ethernet or wireless connection. And after putting it though it paces, I can state unequivocally that it does.

Wireless printing is surprisingly quick; print jobs took no longer than a couple of seconds to move from the print queue on my Mac to the 8000, and the print speeds do come close to the posted specs. In “Draft” mode I was able to achieve 31 pages per minute with a black and white text document; that slowed to about 20 pages per minute in “Normal” mode, while in “Best” mode, which is what HP suggests you use if you’re trying to achieve laser-comparable output, I still got about 6 PPM, not quite as fast as a laser but certainly in the ballpark in terms of output speed. According to the specs, the 8000 can print at up to 1200 DPI in black ink and up to 4800 by 1200 DPI in color on HP Premium Plus photo papers.

As you might expect, print quality for text documents is, in my humble estimation, just slightly below that of laser output (specifically a PostScript laser printer), but “Best” mode provides print quality as good or better than any inkjet I’ve seen, and should satisfy all but the most demanding of consumers and business users. Photo output (as with most inkjets) using the highest possible settings is far superior to any laser printer, PostScript or otherwise, although as a high-volume business-type printer, most 8000s will doubtless be cranking out a lot more Word and PowerPoint files than photographs. Of course, graphic artists, accustomed as they are to true PostScript output and screen to print matching options, should probably look elsewhere.

Print speeds over USB and Ethernet were comparable to wireless, so unless you’re sending a massively large document to the 8000 wirelessly, the wireless printing option is quite usable. I did notice that you can’t have it working wirelessly and via Ethernet at the same time-plugging in the Ethernet cable disables the wireless interface-but I’m not sure why that would ever be a concern; if it’s wired to your router or switch via Ethernet, any Mac or Windows PC on your wireless network would be able to print to it anyway, and thus you wouldn’t need (or want) to have the 8000’s wireless networking activated. 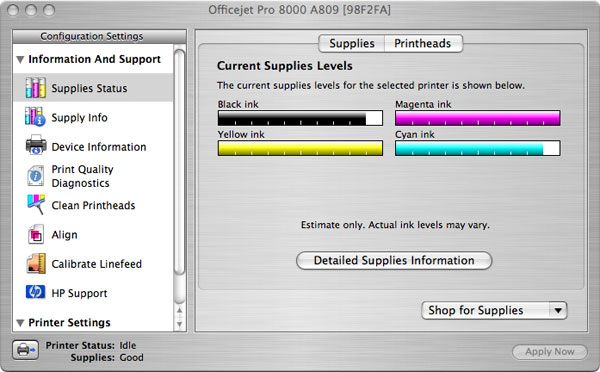 The HP Printer Utility is accessible over any of the HP OfficeJet Pro 8000’s three interfaces and provides ink level status as well as cleaning and alignment options. There’s even a Dashboard widget to monitor ink levels without needing to launch the Utility, another of HP’s thoughtful nods to Mac users.

As far as the printer utilities and management are concerned, the HP Printer Utility (used for diagnostics, printhead cleaning, alignment and calibration) is quite capable and works just as well over the wireless connection as it does over USB or Ethernet. The 8000 also features a Bonjour-enabled Web interface, which means that the printer’s status, info and settings are available via Safari just by going to the Bookmarks menu and perusing the Bonjour bookmarks list for the OfficeJet Pro 8000. That sure beats frantically printing out various configuration pages trying to figure out what the printer’s IP address happens to be at the moment, and it shows that HP kept Mac users in mind when it engineered the 8000. 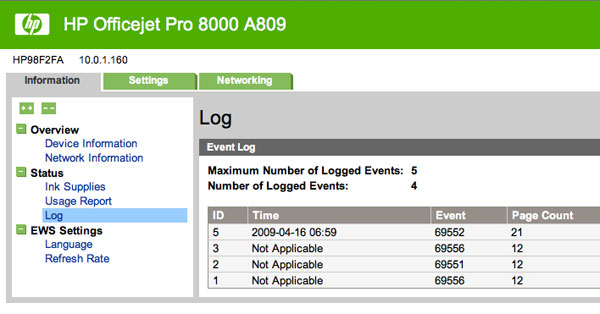 Usage reports and logs, accessible via the OfficeJet Pro 8000’s embedded Web server, let you peruse past print jobs to determine who’s to blame for using up all the magenta ink.

From the Web interface you can view usage reports and logs, set up email alerts to individuals or groups when problems occur (low ink, paper jams and the like), and enable enterprise-level IT options like Simple Network Management Protocol (SNMP) and Windows Internet Naming Service (WINS). While you may never need to utilize these features, much less even know what they are, they’re the kind of IT-friendly options that really put the “office” in “OfficeJet Pro 8000.”

At $159, I feel this printer is a remarkable value that basically does everything right; its price and wireless connectivity option even make it suitable for the home, while its enterprise management features, 15,000-page duty cycle and very reasonable consumables cost are ideal for small- to medium-sized offices. One minor omission for enterprise use is gigabit Ethernet, which is offered on many other HP printers, although not typically on inkjets.

My one real concern with this device is the physical size-at 19.5″ wide and 24″ deep with the paper catch tray at the front extended, it has a remarkably large footprint for a letter/legal sized printer. My HP OfficeJet Pro K850, which can handle paper sizes up to 13″ x 19″, is only about five inches wider than the 8000 and a mere 18″ deep, while my ancient Brother B&W laser measures just 14″ x 15″.

So just make sure to clear a big space for this monster if you’re planning on introducing one into to your home or office; it may be a struggle to fit it onto your average desktop. But given that the OfficeJet Pro 8000 Wireless is an above-average printer, I think you’ll find it’s well worth the extra space.

ADDENDUM: While this applies to a great many HP printers, not just the 8000, I feel obligated to give a brief nod to HP’s free iPrint Photo application for the iPhone and iPod Touch, which lets you print any image from your device’s Camera Roll or Photo Library as a borderless 4″ x 6″ photo directly to any supported HP printer. The program automatically discovers your HP printer on the network, and even selects the photo paper tray if applicable. If you have a supported HP printer and an iPhone or iPod Touch, it’s absolutely worth a look.