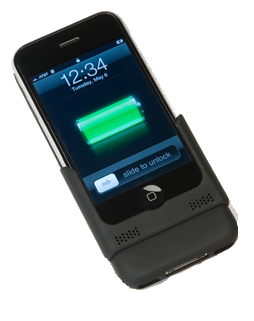 The Weeks Division of MyMac Labs has reviewed the Mophie Juice Pack and Richard Solo external iPhone batteries in our iPhone Battery Shootout. In 2008, long-time Mac accessory marketer FastMac joined the battery battles with its FastMac IV. The FastMac IV comes with a great reputation, as it won a Best of Macworld 2008 and 2009 award. We used it for several weeks, and here are our impressions.

In electrical engineering, as in life, there’s no such thing as a free lunch. Battery capacity isn’t free; it costs weight and space. FastMac has done an outstanding job of designing a slip-in case that maintains the basic iPhone shape, but there’s no doubt that the IV is big ‘n’ chunky. In return, you’re getting a screaming 3100 mAh of power! In comparison, the Mophie Juice Pack provides 1800 mAh. As of this writing, the FastMac IV has the most battery capacity of any external iPhone battery available.

At 2.4″ wide x 5.3″ high x .05″ deep, this is the biggest of the three external iPhone batteries we’ve tested. It’s also the heaviest of the three, by a considerable margin. But don’t leave yet – let’s see what you get for toting around more weight.

When you liberate the IV from the shipping box, you’ll notice a tiny, narrow, paper insert. No, it’s not scrap paper; it’s the user manual. Points off here; not only is the insert far too small, and oddly shaped; the print is miniscule, as in “way to hard for a 52-year old to read.” Even the downloadable PDF version has the same bizarre format and small print size. After getting my magnifying glass to read it, I learned FastMac recommends charging the IV for at least two hours prior to use. It needs about six hours to be fully recharged from a depleted condition. While that may seem long, you’re recharging a capacious battery.

The iPhone slips smoothly into the IV, and the IV makes a distinctive audio “chirp” when the iPhone connector clicks into the IV. It’s a firm fit, so push the iPhone right down, and learn to listen for the chirp. In early usage, I had one or two occasions when I didn’t seat the iPhone properly, didn’t hear the chirp, and later found the IV wasn’t charging the iPhone.

While the top end of the iPhone rises above the top of the IV, the screen does get a bit of protection from the top edges of the case. FastMac includes a screen protection film for free, and that’s a very nice touch. Also included at no extra charge is an iPhone headphone adapter cable. The iPhone headphone adapter cable gives you a microphone, iPod music controls and call mute capabilities just like Apple’s iPhone headphones. At the top of the IV is a cutout to allow the iPhone camera a good view of the world. A very noticeable design feature is the extension below the bottom of the iPhone; this is where the dock connector and USB port live. The IV is charged via a dock connection, and it provides a USB port that allows you to power/recharge both your iPhone and one additional USB-powered device. A twofer!

The back of the IV sports two buttons and a row of four LEDs. Push the button marked with the lightning bolt to display the remaining battery level via the LEDs. Push the right button with the On-Off symbol to turn on the IV. This ability to turn the IV on or off lets you decide when to recharge your iPhone.

FastMac claims the their charging circuit, coupled with the On/ Off button, lets users prolong the number of times you can charge with the IV. FastMac states the IV mimics the power profile of the AC adapter and lets you take advantage of rapid charge mode. This means in less than one hour, you can charge your iPhone to 80% power. We found that to be true. According to FastMac, the best way to use the IV is to let it start charging when you get the 20% or 10% warning, and stop charging after about 45 minutes. FastMac says you’ll notice that you can charge the iPhone more times this way than by simply leaving the IV turned on all day long.

If you use the IV to simply recharge the iPhone when discharged, a full IV (3100 mAh) can recharge a dead iPhone battery (1400 mAh), not once, but twice! This is, for me, the primary reason to use the FastMac IV; it’s one powerful battery!

Be careful, as the On/Off is too easy to push, and I experienced several times when I would toggle the IV on or off inadvertently. FastMac needs to add some resistance to the push button.

The little light at the top of the case is BRIGHT. I travel on business, and found the IV’s light to be a great night light. Sleeping in a different hotel every night makes for dangerous middle of the night strolls to the lavatory, and the IV’s light kept me from bumping into the furniture in the dark. 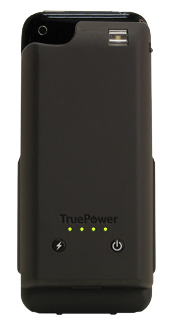 My iPhone’s camera doesn’t get much usage, but I did take some photos using the IV’s light. The iPhone camera is notorious for poor performance in low light conditions, and the IV’s light improved the photos significantly. It’s a cold light, and rather harsh, so you might not use it for a romantic portrait shot.

The extension below the iPhone bottom end contains not only the dock connector and USB port, but also channels to direct the speakerphone audio out through the bottom case. Surprisingly, I found the speakerphone audio volume and quality only slightly affected by the FastMac IV. Most callers usually reported my audio on their phones was no different than without the FastMac IV Some noticed a slightly muffled quality to my speech.

Let’s look at the advertising claims, then compare them with my real-world results. FastMac says the IV provides:

While I do spend too much time on the cellphone, there’s no way to easily verify the various claims. My acid test is, “How much more iPhone usage do I get?”

When on the road, my iPhone usage style is lots of email, plenty of web access, (including streaming radio), some telephone, and very little iPod. Before the external battery era, I needed to recharge the iPhone each night. With the Richard Solo or the Mophie Juice Pack, I could get two days between charges.

With the FastMac IV, I could get close to four days of use before both the IV and the iPhone were totally depleted. This is a huge improvement over any other battery I’ve tried. As always, your mileage may vary. But there’s no doubt that the FastMac IV provides substantially more battery life than either the Mophie Juice Pack or the Richard Solo 1800.

The primary drawback to the FastMac IV is weight and size. There’s no getting around the fact that this is far and away the bulkiest and heaviest external iPhone battery. If you’ve been using your iPhone au naturel with no case, or with just a thin protective skin, the weight and size of the iPhone in a FastMac IV may be a bit of a shock. If you carry the FastMac IV in your front trousers/skirt pocket, it’s going to be very noticeable. When you hold it up to your ear, you’ll be very aware that you’re not using a stock iPhone. You’re not lifting weights, but it’s always noticeable. The IV’s larger size is much less of an issue to me, but several people who I gave the opportunity to try the IV found the extension below the bottom of the iPhone case to be objectionable.

The FastMac IV is two things: powerful and big. It’s the biggest external iPhone battery currently available. The 3100 mAh capacity will liberate you from having to find AC power to recharge your iPhone longer than the competition. But it’s also the biggest and heaviest external battery, and this can be a problem for some users who value the size and weight more than pure battery endurance.

This well-built, sturdy unit, with its included screen protector film and earbuds, is an outstanding value. It retails for $20 less than the 1800 mAh Mophie Juice Pack.

FastMac offers a money-back guarantee. If you are interested in the IV, but are concerned about the IV’s size or weight, I’d advise potential buyers try it out.