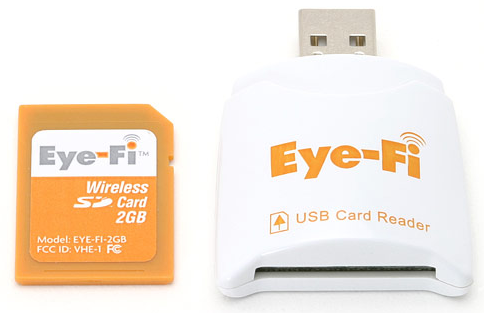 Watch this video to see how it works, and then come back here for a bit of technical info.

FIRST TIME SET UP
Not shown in the video is the first time you run the software. The needed software is actually on the SD card itself. Insert it into your computer, and it is easy to install the needed software. After installing, the Eye-Fi configuration page will require you to set up an account on their server. You will also be asked to set your default home zone, and the page will search for local WiFi radios, and offer them to you, so be sure to install this at home. Enter a WEP or WPA password, and the card will attach to the network automatically and become your home zone. Note that you can now add additional access points, but the card must be in the reader and connected to the computer, and you must be in range of the access point you want to add to do that. Sadly, it will not just take your list of already accepted access points and keys from the computers wireless settings.

After the wireless setup, you will be prompted to pick where you want your pictures uploaded, including almost two-dozen websites like, Shutterfly, Picasa, Flickr, Facebook to name a few, or you can skip this step as I did, and then simply use the MobileMe selection to get the photos to my own computer.

That was about all there was to setting it up. They prompt you to now remove the card from the computer, place it in your camera, and snap a picture. If all went well, the photo will show up in a moment. Set up was quite simple actually, and fairly fast.
As you can see, this SD memory card will upload your pictures from your camera to your designated saving spots whenever you get near your home WIFI “zone”, or any of the many open WiFi zones around the world.

GEOTAGGING
But what is even more cool, if the picture was taken in or near a “known” WiFi zone, it will “Geotag” your photos with the location of were they were shot. No, there is not a GPS in the card too, that would be an amazing trick, but rather the card is using Skyhook’s technology to know your location based on nearby WiFi radios. Skyhook had a rather large group of people (I hear 500) over the last 5 years or so dive all over the country listening for WiFi radios. When they found one, they recorded the name, Mac address, and GPS location of each radio found. They created a large database of all these radios and locations, and subscribers to their service can access this info to know where they are. So if the card can hear WiFi signals around it, it should be able to know where it is when you take a picture. Even, it seems, if the card cannot connect to that WiFi radio, but rather just see the name and Mac address, it still knows where you are. And the claim says it knows to within 100 feet. Not bad actually. Note that this is the same technology that is in the iPhone and iPod Touch that Google Maps program use to identify your current location from WiFi radios. (See http://www.iht.com/articles/2008/01/23/technology/ptend24.php)

So now your camera will not only mark your pictures with date and time, the Eye-Fi card will also stamp them with the longitude and latitude of where it was taken as well. The good news is, that unlike most GPS receivers, this works indoors. The bad news is unlike most GPS, the Eye-Fi card will not work outside of Wifi populated areas. So if there are no wireless radios around (that have been “tagged” in your area,) the Geotag is not added to the photo, and you will just have to look at the picture to remember where you were. 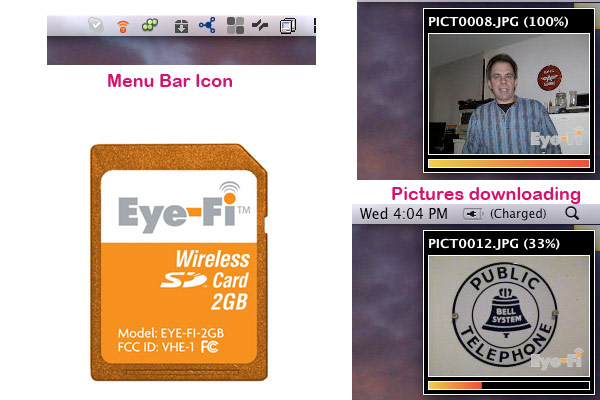 OPERATION
When not in range of a usable WiFi, images are stored on the card as would be expected with any SD card. They can, of course, be copied at any time to your computer using the included USB reader if desired. However, if left on the card, when it does come within range of a usable WiFi access point, it will batch send all the photos that have yet to be sent. As the images transfer to your Mac, you will see a small window pop-down in the upper right hand corner, and a thumbnail image and download progress meter will appear. Also, the small Eye-Fi icon n the menu bar will also animate to indicate it is receiving photos. (See picture above)

Transfer times for single images, when in range of a good WiFi signal varied. But as an example, an 8 Megapixel image took from 8 to 16 seconds to transfer, and data rates averaged from 180 to 200 KB/sec. Sending multiple images in batch mode took slightly longer, as there is a small 1 second delay between the sending of each image. However, if the card is in use by the camera, either taking or viewing images, the transfer will be much slower. And while shooting video, the transfer time went as high as a minute or more per image. Obviously, the camera gets priority on using the card’s memory over the WiFi transmission.

CONCLUSION
Use of the card was about as simple as it gets, and it is really hard to mess it up. Take some pictures and let them upload to your computer automatically. Very cool! But the more I used the card, the more the shine wore off quickly for me. I started to see issues and problems that made it less attractive in the long run. While my list is rather long, it did not make using the card around my house and town any less fun. But, you should know:

• You need to leave your camera turned on for a while after you take some pictures, as multiple file upload takes some time. 200 8-Mpixel pictures will take about 35 to 45 minutes. Also, if you take pictures while not near an access point, when you do get near one, they will all want to upload. (If they should start, and you turn the camera off, they will continue later.) For me, I just got in the habit of turning my camera on in play mode when I got home and left it sitting near the access point. My camera turns itself off after 5 minutes of no activity, more than enough time to transfer 20 images, but if the card was full, it would take several hours to transfer the entire 2 GB contents of a the card, and that assume that the battery would last that long.

• The card does not upload RAW or Video files (or other file formats for that fact), although I hear that may be coming soon. That means that although your pictures will upload, those other files will still have to be transferred by hand when you get back to your computer. Especially annoying for small videos taken with the same camera.

• The camera has no way of telling you when the photos have been uploaded, so you cannot just assume they made it home and delete photos, as you may loose some not uploaded. However, I used my MobileMe address as the notify address, and using an iPhone or other mobile device with email, I was notified when the upload started and was completed. You can even have a Twitter message, or an SMS message for notification, but the service can get very chatty with start and stop messages if you turn your camera off and on and off all the time. Hopefully, camera manufactures will include an interface (or just build the technology into the camera itself) and make this much more seamless in the future. That said, I would also like to see an option that deletes a photo from the card automatically when the card gets confirmation that the upload is completed, freeing up space on the card immediately without me having to look at an email or SMS message and delete by hand.

• The range of this card is not that of a typical WiFi access point, not even close. This is not surprising for several reasons. First of all, it operates inside a metal camera body, and that will surely attenuate some of the signal. Then, of course, there is no external antenna on the card, and that too will limit its range. And, of course, the small size means not a lot of power either. What this means in reality is that the range is short, and the WiFi access points will need to be close by to work well.

• The transmission power needed is obviously a drain on the camera battery. I am not sure what power management there is or what the impact on the overall battery life was.

MyMac Rating: 4 out of 5. All in all, this is a good device for the casual person who shoots a few images here and there and then wants them on the computer easily and quickly. For that use I score a solid 5 out of 5. However, for the person who shoots a lot of images and fills up a memory card quickly, this is not a good solution, as your battery will go dead long before the images ever get uploaded via WiFi. And if you have to move the card from the camera to the computer anyway, well, regular, faster, larger SD cards cost about 60% less than the price of this card. So unless Geotagging is REALLY important, and you are shooting in a populated area, this may not be for you! A lot of “ifs” cost 1 point.